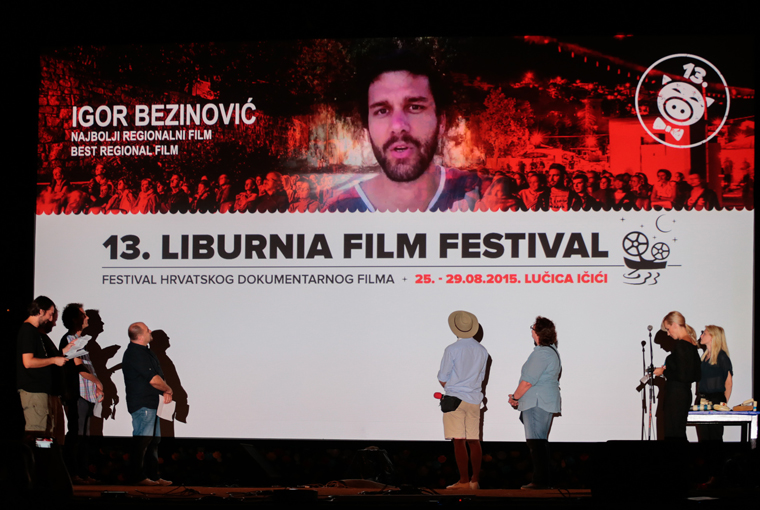 We caught up with Igor Bezinović during the 2018 Trieste Film Festival, where he presented the short “Cartolina de Momjan” from his 12-part series on different Croatian towns. Bezinović speaks about his experiences at the festival, the themes that interest him, and future projects.

Hi Igor, I’ve caught you just before you leave Trieste Film Festival, what memories will you be taking away with you?

My film was screened two days ago, and it was very nice. Out of the 7 other short films shown that night, mine was the only one that got a laugh from the audience so that felt good.

Was it because of the lazy pig by any chance…?

Yes, the pig of course! The other films were mostly quite dark so I’m happy to have brought something cheerful to the crowd. Being locals, they really understood the film with its local dialect and humor.

Did you see any other films outside of the shorts screening on Monday?

Actually, I really like Trieste, so I spent a lot of time visiting the town and walking around. I come here a lot, a few times a year, so I know it pretty well already.

You were here last year with one of your rare feature length films, A Brief Excursion.

That film shares some of A Postcard from Momjan’s qualities; both feature voiceover narration, both were shot in Istria… Trieste was the best place to screen it. Short films and TV are what I’m mostly doing though, it’s how I make a living.

A Postcard from Momjan was actually a pilot that ended up becoming a mini-series of shorts on a variety of small towns (Kartoline). I directed 3 of the films and then produced the rest which 5 other directors worked on. I like to think of it as anti-nationalistic TV. The series isn’t only in one language or one dialect, it celebrates the variety that is spread across Croatia.

That brings me around to my next question, how important is the issue of identity and nationality for you?

I’m a local patriot, I like to explore my identity through my heritage and through the local heritage. I grew up in Rijeka in the 90s though, when there was a struggle over borders and independence, so I’m anti-nationalistic. I think local love is a good thing, to understand your surroundings. It’s when patriotic feelings start to lead to exclusion and neighborly tensions that it becomes dangerous.

Would you say most people in your generation feel the same, or is nationalism prevalent?

I don’t hang around with anyone like that but I guess you could say there has been a rise of nationalism in Croatia.

Going back to identity, your work seems to share this sense of stillness and lethargy…

Maybe it’s not the right word, it’s more like that summer laziness, freedom from time…

Yes, freedom is a nicer word.

One of your works is a little different though, tell me how The Lovetts (a documentary about one couple’s sex life) project came to be?

I was invited to CPH:LAB in Copenhagen in a group of 20. The point of it is to push filmmakers’ boundaries and I wanted to get out of my comfort zone. I wanted to experiment. Try something that I wouldn’t usually have tried. It’s actually traveling around a few festivals and doing well, but whatever you do, don’t watch it with any minors!

My next project will be a full-length feature film about Rijeka, my hometown. The city was conquered after the First World War and it wasn’t clear whether what was then called “Fiume”, was going to be Italian or Yugoslavian. In all the confusion an Italian poet named Gabriele d’Annunzio managed to begin what turned out to be a 16-month occupation. It’s a pretty irrational and bizarre story when you look into it. So I’ll be working on that the next few years!