It's a Small Town, You Wouldn't Know It 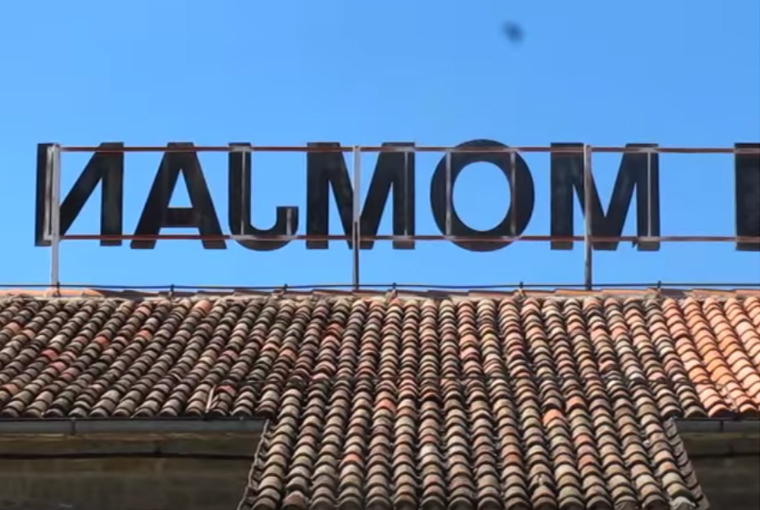 Screened out of competition at Trieste Film Festival, this very short and very sweet film blows a breath of the Adriatic sea across the screen. A handful of carefully selected frames, a quirky score and a friendly voiceover are sewn together to make a simple but striking depiction of the small Istrian town of Momjan in Croatia.

Although he has two feature-length films to his name, Igor Bezinović is a prolific short filmmaker whose catalogue betrays his attraction to the small details and significant moments that life encompasses. Adding to his charm is the geographic trail that his filmography traces across the Croatian map, thus revealing the director to be an artist sensitive to the elements of his country’s day-to-day life. Cartolina de Momjan itself is part of a wider series, Kartoline, that creates portraits of 12 different Croatian towns: Gornja Stubica, Tounj, Vrboska, Zdala, Susak, Prezid, Bol, Susnjevica, Strigova, Blato and Lokve.

The film opens with a wide-angle shot of Momjan that encompasses the town, its church and the descent down to the coast. What is interesting however, is that the director creates another image within the same frame using a doodle reminiscent of a postcard or stamp. This small detail has a big impact on the film upon reflection, reframing the image in a way that reminds the audience that it is Bezinović and his camera’s perspective that they are about to experience. Whilst seemingly superficial, this aesthetic choice is a very gentle reminder of subjectivity, of the construction of a story and an atmosphere. Not so subtle is the film’s title, which can be translated as “Postcard from Momjan”. We often send a postcard when we want to share our experiences with others in order to let them know that we really visited a particular place (at a particular time). Despite Momjan’s remoteness, it would seem the director wants to prove that it exists, that it is important, individual and valuable in its own right. For the spectator who wants to know more, the next frame of a curving countryside road invites them to come on in.

Once this invitation is accepted, do not expect to meet the citizens of Momjan in order to get to know the place. The film is almost completely devoid of physical human presence with the exception of a few men who like to sit in front of the local shop and discuss their shared passions. Instead, Cartolina de Momjan flashes images of automobiles, homes, the town’s football pitch and, with a pinch of nonchalance, a monument to antifascism. It is here, as well as with the backwards shot of a giant Momjan sign, that the director leaves a clue that his film is more than just a pretty postcard.

Going back to the absence of people, this choice gives the 4 minutes and 36 seconds running time a way of creating a sense of time and history that spans across more than just the surviving generations. In this respect, the town’s landscape, vineyards and old stone buildings contain the past of a region whose borders have been chopped up and shuffled around according to various ruling powers. Such a complicated history can often overshadow the more intimate and individual stories of a place. Yet, this is something Bezinović does not allow to happen through filming the graffiti of a love heart scrawled on the historic Momjan castle, as well as the wafting tail of the infamous sleepy pig who can also be counted amongst the residents. We may not see many people in the film but instead we see what they love, what they create, what they have maintained and looked after through the passing years. The lack of human protagonists does not beget a lack of humanity.

This is reinforced by the voiceover element that narrates the film. The same voiceover also introduces a slightly political aspect into the mix in that it champions the local dialect of which endless examples can be found throughout this corner of Europe. In fact, this is perhaps the very reason that Trieste Film Festival chose to screen the short. The 2019 edition of the festival celebrated its 30th birthday and in doing so, it payed tribute to 30 years of cultural and audio-visual exchanges. By programming such an intimate, particular and local film, Trieste is sending a strong message. Difference is accepted and originality is celebrated. In today’s modern political climate, it is refreshing to move away from mere tolerance and the absence of hate and fear-fueled discourse.

In the modern cultural climate, Cartolina de Momjan, takes the risk of communicating in a more positive way. The film encourages individuality and local everyday life which in turn call for a more open and neighborly society. For those who are willing, this short film will take them, if for a moment, to the small town of Momjan where olives, wine and contemporary art reign.