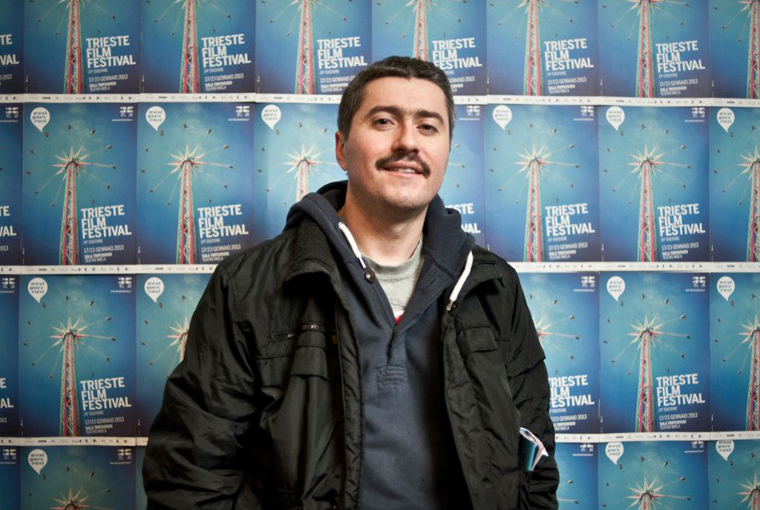 In Marian Crişan’s Morgen, a Turkish immigrant on his way to Germany is stuck on the Hungarian-Romanian border. He gets help from a local security guard who finds a friend in the stranger. We meet Crişan at the Transilvania International Film Festival in Cluj, where the DVD sale of his film was launched.

Why did you want to make a film about immigration ?

Acutally, my intention was not to make a film about immigration. My intention was to make a film about a normal guy living in Salonta, a small town on the Romanian-Hungarian border where I am from. I wanted to show that region of Romania. In the film, we follow the daily life of the Romanian most of the time. That’s why we didn’t follow the immigrant in the beginning of the film. Of course, the arrival of the stranger interferes with his life. We wanted to ask ourselves how an encounter like that can change the life of that man.

So the film is not political ?

Everything in life is political. People talk politics everyday. All the scenes in the film are based on experience or events that other people told me. I talked to local police officers and with immigration traffickers who told me a lot of stories about people crossing the border. But you can look at the film from a distance, and some scenes will appear absurd. That’s how it is. If you go to the police station, you will always find two or three immigrants telling their life story in some exotic language that nobody understands. It’s funny, and sad.

In what way does your film differ from other films on immigration, for example Philippe Liorets “Welcome”?

Whenever you make a film, you think about the films that were made before. Films about immigration deal with harder topics. The Kurd in my film wants to go to Oberfeld, which is a village in Germany about as small as Salonta. He doesn’t want to go to Hamburg or to some other big city. There is a funny side in this story.

After the two main characters meet, do their desires reverse – the immigrant wanting to stay, and Nelu wanting to leave ?

We actually had a version of the script where the immigrant stays. But the reality is such that we are not a destination for immigrants. Romania is a country that exports immigrants. In the past, a lot of people from Romania immigrated, mostly to Spain or Italy. Millions of Romanians are working and living outside of Romania. So we deal with immigrants, but we are understanding them. There is empathy there.

Is Nelu really concerned about the immigrant, or does he want to benefit from this friendship?

I think there is a connection between the two. Sometimes you can feel closer to a friend than to one of your family members. Even if you don’t communicate, you can care for other people, it’s instinctual. But Nelu doesn’t fully understand the problem of that man. The border is just a place where he goes fishing. Nelu is a good guy. He helps. But he also takes money from the immigrant. It changes the perspective. Nelu uses the money to rebuild his roof, but he knows that he is responsible for the immigrant.

Does the encounter with the stranger change Nelu?

It changes him. Before he meets the immigrant, he doesn’t take any decisions. And slowly he revolts and he realizes that he can do something. But it was hard to put that on screen without too much dramatization. I wanted to let this change grow little by little. What would a real person do, in this situation? That was our strategy, talking to the people and the families that live on the border.

How did you cast the Kurd?

It was a long process. We didn’t find an actor in Romania, so we contacted an agency in Istanbul. There I found Yilmaz Yalcin and we did some rehearsals online, but we never meet before the shooting. Still, he was perfect, because he didn’t know where he was, he didn’t speak the language, and we didn’t give him the entire script in advance. So he didn’t know what will happen, and the situation on set was not very different from that in the film. After ten days of shooting he started to imagine things about going to Germany.

Why does Nelu refuse to cultivate his fields ?

It’s a paradox. Especially in this part of Romania, the fields are very fertile, and the soil is very good. But the peasants don’t have the means to do cultivate the land. During Communism, farms worked in agricultural cooperatives. On a national level, it worked. Everything was organized and logic but the fields belonged to the state. Now, the state gives the fields back to the people and it’s chaos. Everybody has a small part of land but they don’t have the money to work. If they do agriculture, they can live on it, but they don’t make profit. There’s a lot of land that is not used. It’s sad: we buy milk from Sweden, but we have land and cows.

Do Romanians identify with the EU ?

I think so. People are happy that they can travel more. But in 2007 everyone thought that everything will change radically. But they didn’t. So the miracles that a lot of people expected didn’t happen. New roads, new buildings…it’s like that.

There is even a nostalgia for Communism now. Even some young people believe that it was better during Communism. Can you imagine that? Sometimes Romanians are like that. It’s an old conflict between food (food, including house and car) and freedom, and they tend to choose food. During Communism, food was short, there was little to consume. Now we have food and freedom, and people still think it was better. They had someone else – the state – to take care of them. They didn’t earn a lot, but they had a job, a house, and supposedly life was steady. Now, a lot of people are unemployed, they live on loans, and they ask themselves: what freedom ? I’m working harder, but I have difficulties “to end the month” because my wages are spent before. So then I conclude that life was better before, that I don’t care about the EU or Communism as long as my life is comfortable.

I think the Eastern European audience understands the story and the characters better. The Westerners are more concerned with the immigration issue. But two weeks ago, Yilmaz Yalcin, showed the film in his part of Turkey, which was very important. Yilmaz was very proud since it is more difficult to make such a film in Turkey, not only because of the subject but also because of production costs. It was important for him not to hide problems such as immigration.

Apart from the setting, is your film Romanian?

I think you have to be realistic about your possibilities. If I would have the financial means to do a Western, I would love to do a Western and change my views. But I know my budget and my working conditions, there is no point in dreaming about big sets and stars. So I’m more concerned with reality, with making things and people look real.

Do you think Romanians want reality?

I don’t care. I’m not a business man. When you paint, you don’t ask whether people will like it, whether you should use this color or that. You just do it and that’s it. If you say that cinema is art, if not, then…Things are misunderstood. Art films and auteur films are not for masses. It is not right to compare entertainment films with art films. This counts everywhere, not only in Romania but also in France, Germany, Italy, or wherever. In Romania we have an audience of about 50 000. This is an audience. For Morgen, we had 15 000, then we went to festivals and the audience got bigger. We make films for people that are interested in art, and the audience for that is getting bigger.