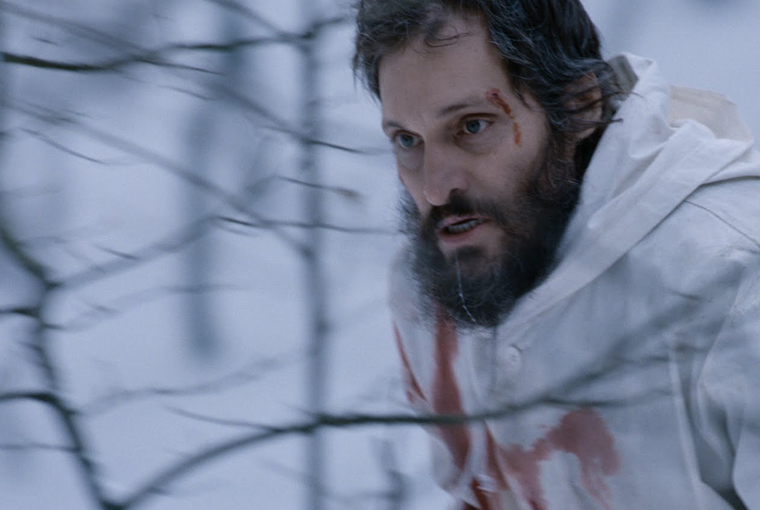 In Jerzy Skolimowski’s Essential Killing, Vincent Gallo, in the role of an anonymous Afghan, is being chased through contrasting landscapes. The film starts in the desert and ends on a snowy hill. The question of why exactly he is being chased is somewhat difficult to answer. Gallo doesn’t speak a word (he might be unable to hear because of an explosion at the opening of the film) and places, names, and a determinable historical background are also deliberately silenced.

In the beginning of the film we see Gallo hiding in a cave with a rocket launcher killing three armed Americans in oriental disguise as they try to make their way into his hiding place. But a group of soldiers in a nearby helicopter witnesses the fight and tracks him down. After being kept for a while in an ugly prison camp, he is transferred (we might guess somewhere like Guantanamo) and travels in a convoy through an indistinct Eastern European country. However the truck in which he is held slips off a hill after colliding with a wild pig. The accident permits Gallo to escape into the forests, where the manhunt takes place for rest of the film.

Skolimowski explained his refusal to reconstruct a concrete historical event, saying that the Afghan “could just be an innocent man caught in the wrong place at the wrong time”, and that his film is about the “struggle of man against many.” Indeed, the three men he killed in the desert are not the last, and by the end, the film succeeds quite well in letting us forget what policies, armies, and countries, might hide behind the characters. So Skolimowski refuses to define his characters through recognizable existing structures. This is a demanding approach, and seems even more radical than the taking-the-other-side’s-perspective films like Letters from Iwo Jima offer. There are no sides in Skolimowski’s film, and as the movie proceeds, the main character seems to fight for himself and not for an ideal or a country. As a result, this questions the liability and legitimacy of fundamental things most civilizations take for granted. By the end of the film Gallo is on a horse, unarmed and entirely dressed in furs. The helicopter from the beginning seems very far away and one might ask if Skolimowski’s vision of contemporary politics might appear regressive.

In the beginning of the film however, things are different. The reason for the chase to have begun cannot be understood without some sort of “framing” having taken place. “Framing” meaning that people involved in this warfare recognize and are recognized through and by certain judgments closely linked to existing contexts. In the first scene, the Afghan is framed by the unit in the helicopter, which makes him coincide with their judgment of being a terrorist and consequently of living a life that can be justifiably destroyed (thus the rocket that attempts to kill him). But prior to that, the Afghan too, framed the three Americans he blows up. This means that even if he was not trained to kill them, his motivation for taking their lives is still based on recognizing them within a prefabricated set of accusations, that, to make things even more complicated, appear to be doubled. In short, he thought that they thought he would be worth killing.

Skolimowski’s major concern is identity, and that of his character is recognition. The dramatic structure of the film points this out: as Gallo moves away from the frames that the film established in the first few minutes, and as his war/terrorist-identity gets lost, the more we seem to care for his survival. (Even if we might not identify with Gallo, there are obvious moments in which we would like him to be spared from death, which already makes us different from those who chase him). Ultimately, the Afghan’s escape during the car crash also loosens the rigidity of the box in which they have placed him, opening the possibility to redefine new grounds for recognition. This is not always easy, and memories from the past seem to interrupt with things running smoothly. But in any case, it seems as though the displacement of the opening situation, the re-framing of the political opposites we determined earlier – terrorist/soldier, prisoner/warden, Afghan/Americans – destroys the taken-for-granted reality in which these concepts could live.

Essential Killing superbly shows how frames break apart when contexts change. Thus the American soldiers appear absurd, when they are convinced they have surrounded Gallo, whom they suspect of hiding in a hunting blind, and discover a drunken hunter. Gallo, on the other hand, seems just as ridiculous, killing an innocent lumberman, thereby transferring the conditions of the hostile environment he experienced in the desert of the Middle East onto this new territory. The war they are fighting looses its credibility the deeper the character’s become immersed in this end-of-the-world landscape.

As Gallo has to deal with hunger, cold, sleep and fatigue, Essential Killing feels closer to a road movie (such as Into the Wild), where characters try and find a new space for living and have to deal with nature’s unwelcoming tricks. At the same time, the search for an inhabitable surrounding makes us aware of the fact that life requires a certain amount of social conditions in order to be maintained. While one could get the feeling that Skolimowski dreams of a peaceful no man’s land, shortly before the end of the film, when Gallo can no longer survive on his own, he gives his life over to a deaf-mute woman, who nurses his wounds and supplies him with food and shelter. Before that, he was unable to accept new forms of sociability or the idea that he might be guilty only for some people within a certain frame, but innocent in another. The encounter with the woman is different. He feels recognized by the woman, who seems as strange to him as he does to her. In her house, there are no established forms of communication, there is no exchange of words that could tell each of them who the other is and that could make strange assumptions about even stranger social implications. The only instance in which life is livable for the main character is not out in the wild, but in this house, where no judgment is necessary, where frames have been reduced to a natural minimum: the obligation to save another’s life.