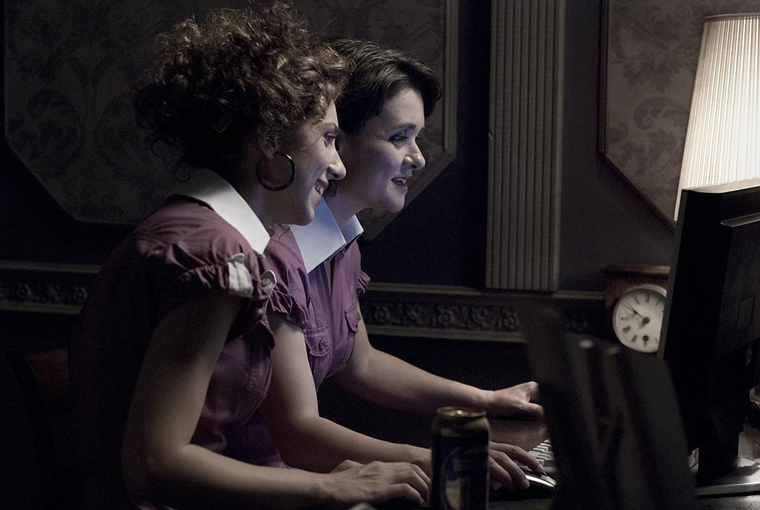 Alexandru Maftei’s Hello, How Are You? is a comedy of errors. Gaby and Gaby are unhappily married, so they look for love elsewhere, on the net, only to discover that the person they fall in love with in the chat-room is the same person they are married to. But in Maftei’s comedy, the resolution of the “error” does not lead to marriage. When the masks fall at the end of the film, the couple divorces. “After so long grief, such festivity!”, Adriana proclaims at the end of The Comedy of Errors. Where Shakespeare’s characters could find relief in reconciliation, the pair in Maftei’s comedy is left alone. The resolution of the “error” produces shame instead of blissful puzzlement. They are unable to rejoice from the mistakes they share.

At the beginning of the film Gaby and Gaby are at the bottom of their self-esteem. He was once a piano virtuoso, and she an aspiring psychology student. But fate (marriage?) asked for compromise, and arranged things so that she ended up working in a laundry and he in the seat next to the artist, as the invisible man turning the pages. With little left to love about themselves, they have a hard time loving the other. However they prefer to live in a status quo – at once too polite to really hate the loved one, and showing enough courage to poke at him/her when necessary. “I don’t really feel like sleeping with you” is as tough as it gets, but these statements of uncertainty, still allude to a desire not entirely lost.

And indeed, Gaby and Gaby are passionate about the unknown lovers they found on the net. Being in love makes all the difference. All of a sudden, they feel desired, which in return has an impact on their love life at home. If they didn’t care much about the other’s life in the beginning of the film, they are now more attentive, at times even jealous of not knowing everything about each other. But when the question, “are you in love with someone else?” is finally asked, they are both too afraid to tell the truth.

Gaby and Gaby also have a teenage son, who, unlike them, is proud of having numerous affairs at once. If his parent’s conflict is one of sexual liberation, his is one of constraint. His most heroic action is thus, when he abandons a bunch of lusty girls on his eighteenth birthday and makes a phone call to the class geek. She is not interested in having sex, but enjoys discovering love. For him, she is also the hardest love to get. Here too, his parents are similar, since they leave other opportunities of love aside, a young ballet-dancer and a wealthy man who drives a Porsche, striving instead for something seemingly out of reach. Maftei enjoyably portrays these two storylines, where the parents, but in a less radical way, begin imitating their son, and where the son, comes to play the role of his parents. The courageous step of the parents is obviously when they finally decide to meet.

When they do meet, at the end, it turns out that the question “are you in love with someone else?” was not a lie. On the other hand, they wanted the lie, which makes this adventure yet another failure. Now, as fate betrays the hopes of imagination, reality kicks in, forcing them to accept that they have been separated all the while. They thus divorce, as if this “error” unveiled all the things unsaid. The imagination – the affair on the net – destroys their life, and it seems awkward that they cannot integrate their imaginative love into their relationship. Their son was able to combine his imagination with his real life – being in love and famous. At the end of the film he has a girlfriend, the geek, and wins a competition in school which, as he tells us through his habit of making voice recordings of his thoughts, might be more of a first step than his attempts to star in a porn flick.

Nonetheless, the divorce opens up other possibilities. Gaby closes her laundry store and returns to her academic ambitions. Her ex-husband can suddenly be seen performing music, he plays the triangle in his orchestra. So in the end, the unveiling of the error has a cathartic effect. The film ends with a question: “are you there?” If Gaby and Gaby, are the ones chatting (who else?), then for them too, imagination is finally able to revive their relationship.