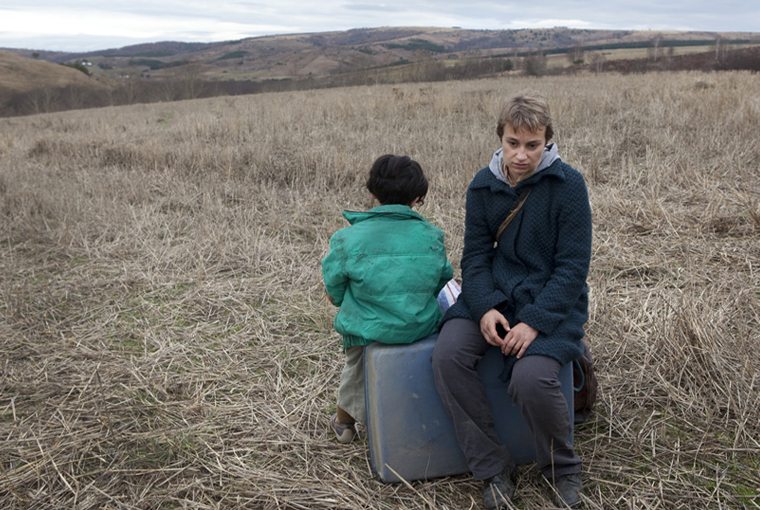 Recent films about war and politics focus on the individual rather than on the structures in which these individuals struggle. Fundamental human emotions, conditions, and desires prevail over distinguishable battle grounds. These films, such as Arielle Javitch’s debut feature Look, Stranger, but also Skolimowski’s Essential Killing, reviewed here this month, purposely silence all elements that could hint at a recognizable setting. Countries with names, and groups with nationalities are too fictitious for the reality of war, whose cruelty, so it seems, can only be revealed if the human is stripped of its political context and social function. Like the main character in Skolimowski’s film, Anamaria Marinca who plays a young refugee in Look, Stranger, doesn’t even have a name, as though the sheer nameability of the character would put her unrepeatable sorrow at risk. A name can be shared, it is not unique. It is part of a cultural practice, indeed too cultural for the back-to-the-roots-humanity of these films.

So what makes the character in Look, Stranger unique? Her body, her face, her story? Javitch does not seem sure, since she also tries to avoid telling a story, relying on a more fragmentary account. Look, Stranger is difficult to reconstruct. Apparently a woman wants to go home. She is driven through a wartorn landscape by a man who gets shot while removing a dead body lying on the street. They are accompanied by a child, but the child too disappears, and only returns later in an obscure vision. Was the child real at all, or only a mirror of the main character’s vulnerability? Later Marinca meets some sort of trafficker or guide, played by Tom Burke, who helps people from place to place in exchange for money. He seems to know the country and the rules of war: he has a gun, he disarms mines, and finds a way to cross a river. But as they are traveling on, the characters do not reveal more of themselves. Are they suffering? Are they trying not to suffer? Or are they trying too hard to suffer?

Nonetheless, Marinca’s face and body seem to reflect her story. At times, the softness of her face contradicts with the burning landscapes, the concrete ruins scattering the ground. She seems innocent, shocked and her distant look might reflect a yearning desire to be elsewhere, safe, at home. On other occasions, the sadness of her face opposes the landscape, especially when fields and forests seem untouched, shimmering and peaceful. The objects are reversed, but the situation stays the same. The destruction outside has only turned inside, and it is now she who is the shattered being, and who, although the environment is no longer hostile, will have a hard time to find peace. A scene in which Marinca and Burke violently throw an apple at each other, reflects this traumatized condition.

While we neither necessarily need to know where Marinca’s home is, nor its name, we still might be curious to find out how she feels about that place. Stories which forgo systems, structures and frames, should not forget that the stories of their characters are always concrete. Consider for example Ulysses’ nostalgia for Ithaca. The hero’s strongest feelings for his homeland are not revealed through concrete descriptions of his nations. They are told through an image: the weeping Odysseus, sitting alone on the shore of an island. Yet behind the horizon, for Odysseus at least, there is such a place as Ithaca. The danger in leaving out concrete information is that true emotions are never vague. It seems useless to grasp or to portray general weltschmerz, where feelings of pain and suffering can only remain obscure.

Unlike Javitch, Skolimowski succeeded in leaving out political background without leaving out emotion. The visions his character has of paradise – some warm desert-like region – couldn’t contradict more with the reality he finds himself in – the snowscapes of Eastern Europe. Ultimately, this contradiction also made the real place less abstract, imaginable for the viewer. If everything is about personality in Javitch’s film, it is too bad that the personality of her character remains opaque.