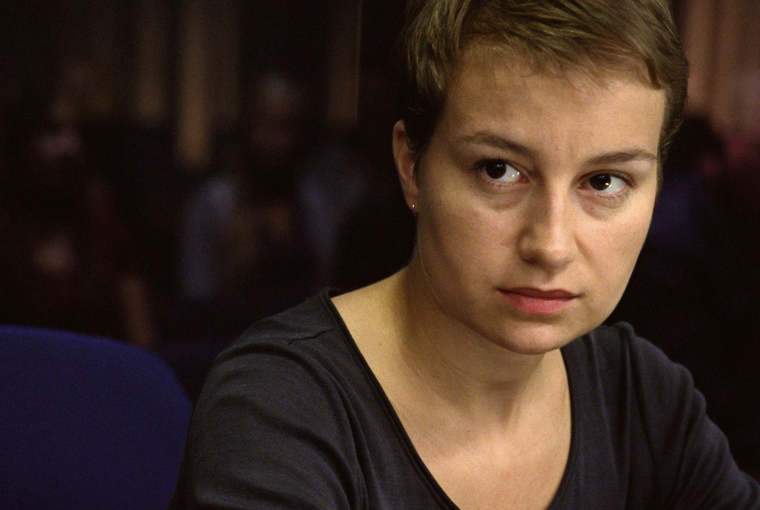 Look Stranger is Arielle Javitch’s debut feature. Anamaria Marinca plays the role of a refugee trying to find her way home through a country devastated by war. We met Anamaria Marinca in Germany, where her film was screened at the goEast Festival. We talked to her about the unusual narrative of the film and about the impressions she had while playing in the film.

The last sentence you say in the movie is “are you there ?”.

I’m glad that our first topic is this question because this is the first question in Hamlet. The play begins with that phrase, it’s one of the guards asking « who’s there ? ». So that’s precisely where the film starts, retrospectively. Someone who saw the film should, in my opinion, start with the end and with that question. At the screening yesterday nobody asked that question. They asked what’s in the bag, who was the child, was it my cousin, or my sister? It’s strange because nobody realized that this is our main topic.

Whom are you addressing ?

Myself. It’s a quest in the realistic sense of the term. There’s a young woman, trying to get home. But try to define home.

Is the house in the end of the film a home?

For a house to become a home it needs to have a soul. My question at the end is there. This journey was a quest. A quest of myself, since this woman – or this person, because it’s not a feminist film – needs to find out who she is. At the end, I think one can even ask if the guide was real. Everything we saw. Was it an inner journey or an outer journey?

The film is an odyssey?

Yes, otherwise I would have not chosen to make it.

Does your character have a story?

Of course she has a story. But we did not approach her character from a psychologically realistic point of view. We weren’t into method acting or anything like that. The story is vague. I do think in the present when I’m working. You can imagine a biography for the character and we get some information from the film. She spent a lot of time in the camps, she’s alone, more or less. There is a child, but she’s there, then she disappears, so that from the moment that she disappears and then comes back only later, in the tent, one realizes that she’s a metaphor. She’s present but not necessarily a realistic character.

So I’m thinking more about the present story than of the character’s. If she went to school, what’s her family like? I could tell you five stories, but this was not my way in dealing with this character. I’m using the word character, but I usually try to avoid this term. I prefer to speak about my past in a story. I don’t really believe in characters and artificial construction of situations. No, it’s me, in a given situation.

Sometimes your character seems to be reflected in the surrounding images, for example the landscapes, or the ruins.

Of course. That’s similar to what Baudelaire called “correspondence”. The film is built on these correspondences. Everything around is a reflection of my inner state, even the soundscape. The landscape I traverse is a reflection of my soul. The presence of war in this film, is in fact, an absence. As is childhood, this being – I don’t know how to call this child – that’s with me, this presence or absence.

So it’s very difficult to speak about. If we wanted to tell the story about the the drama of a woman trying to get home, we would have probably followed a recipe: we would have had a bit of love, at the end there would have been a family, because there’s a child, a man, a woman. They hate each other, and then they love each other.

We did not choose to specify a time and a place. The fact that the character is speaking English is secondary to the subject. Arielle initially wrote the script in an invented language. Of course, the film could seem very static- there are only a man, a woman and a camera. But it’s very subtle.

In one scene you and Tom Burke throw an apple at each other. What is happening in that scene?

They make a pause in their journey. The sun is bright, it’s autumn, look at the colors! And then suddenly life kicks in. They are very young people, there are apples on the ground, and it all comes together.

But he throws quite hard, doesn’t he?

We improvised that scene, like many scenes in many movies I did. You work with what you find in nature. Think of football. It’s all friendly until someone, you know…But then he leaves, and that’s the problem, he leaves me alone.

Or did you make him leave?

Of course, you can see it like that. There is a man, a woman, an apple. In a way it’s all very symbolic. There’s the scene with the skirt, where I’m hurting him without wanting to. But that’s what we do constantly, hurting the people we love most. And I’m not saying that, at that point, this man and this woman love each other. These accidents change everything. If only he didn’t leave, if only I didn’t make this joke about the skirt, belonging to a woman he obviously loved, maybe the path would have changed its direction.

« Previous post
Andrei Ujică on The Autobiography of Nicolae Ceauşescu
Next post »
Alexandru Maftei on Hello, How Are You?