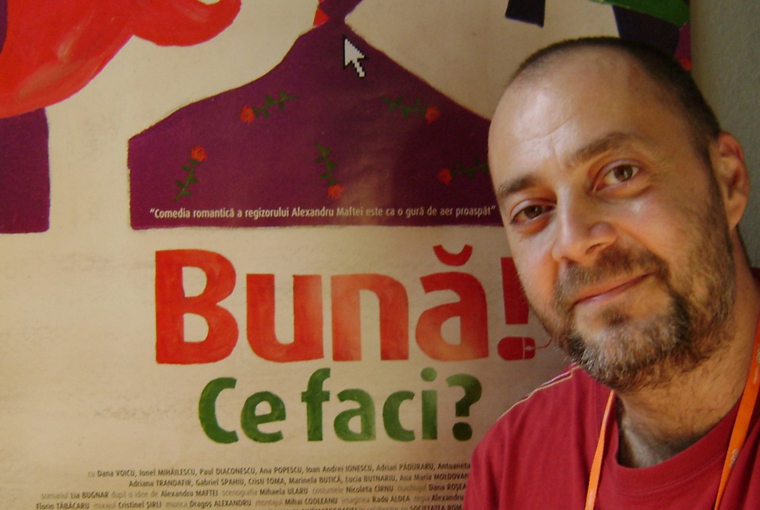 Alexandru Maftei’s romantic comedy was screened at the goEast Festival in Germany this month. We met the director after the screening to talk with him about his film.

Your film is based on a true story ?

The script was inspired by a short article that we found in a newspaper, about four or five lines. It was a story that happened in Italy. Two people started chatting with a person they didn’t know. When they decided to meet, they realized that they are husband and wife. After that, they decided to break up.

In classical comedies – by Marivaux, Beaumarchais, some by Shakespeare – couples fall in love with each other in disguise. But when the masks fall down, they marry. In your film the same thing happens, but they divorce.

I haven’t thought about that before. The problem is that we’re so fed up with happy endings. It seems improbable. Also, the real story didn’t allow such an ending. They divorce because they feel guilty. They are ashamed that they let this other relationship happen and that they were cheating on their partner. When we read the article, we asked ourselves, how would someone act with something like this? It would have been simple to make up another story. But we knew that they will break up in the end. So we thought that the two of them are so polite, and faithful to each other for twenty years, that they wouldn’t just have an affair. It was very hard for them to cheat on each other, even on the internet.

So they feel ashamed. But the husband laughs when he sees his wife during the date. Do they also feel liberated?

Maybe. In that scene, their reactions are very different. Of course, there is this laughter, and yesterday at the screening, the audience laughs with him. But then when she leaves, it looks like he’s getting sick. Even if he laughs about it, when he realizes that she is leaving and that she will not come back to heal this guilt, he get’s sick.

I think, the final text that appears in the film – “are you there?” and “Yes” – gives us the hope that maybe they will get together again. This experience that they have will go deeper into the two characters. They realize that their life was on a wrong track. So each of them after this very intense moment of disillusion, decides to do something with their life and maybe become a new person. The important thing is that they realize something.

What role does imagination play in the film?

Imagination was one of the challenges we had in the film. How do we show someone having an affair with a total stranger? So we decided not to show the eyes of the two main characters. Usually eyes are what make a person recognizable. So we tried to translate the incognito. There are close-ups, but without eyes, and a lot of shots from above or from behind.

During the writing stage we also thought that we didn’t want them in front of the computer all the time, which would soon become boring. So that’s why the text that they write appears on images, as if we witnessed their feelings in the chat.

The imagination that they have looking around and wondering who is the person behind this computer screen. We have these dreamy sequences, where he sees beautiful girls smiling at him on the street, and she is admired by all these handsome men. This was a way to express their imagination. Of course, there is a always a contrast between what they are imagining and what is happening in real life. For example, when they are looking at the moon, she is about to dry the laundry on the balcony, and he’s looking for a sink pump. At some point, they start to live in that imagination. The internet gives this opportunity, to project your own dreams into a person who is not exactly how you think he is. At the same time, you can pretend to be someone you’re not.

How did the fact that they both had a secret change their relationship at home?

We wanted them to have a suspicion, a suspicion that is not really referring to a realistic situation. The suspicion starts when they see each other with somebody else. But we, as the audience, know that there is nothing happening between these presumed lovers. So here again, something is happening in real life, that is seen through the relation they have on the internet. Gabriela sees Gabriel with somebody else, and she’s not very convinced. But she feels like he’s having an affair, which is true, since he has one on the internet. So she also wants to act like a person that has something to hide, or is in love.

If somebody is very interested in you, you become a different person. In the beginning of the film, the two characters are neither interested in each other nor in anybody else. So they become very unattractive and boring themselves. When somebody likes you, you become more beautiful, all of a sudden you’re funny, and sexy. In a way, when they are in love they are in a different kind of spirit.

Some people complained about the way the actors talk in your film. Why?

There are some language subtleties of the younger generation, that you might not understand if you are not aware of these things. On the other hand, cinema before ’89 was so censored that dialogue seemed very fake. After ’90 the way people talk on screen and the words they use, became very realistic. We tried not to be so realistic, because, in my opinion, cinema is a transfiguration of reality, not reality itself. We worked a lot with the actors to have them speak clearly. You must understand, that in some Romanian films, you cannot understand what the people are saying. Of course, if you have subtitles there is no problem. But in films that want to have this realistic touch, actors mumble and you can’t understand what they are saying. For example the young actor, who plays the couple’s son, had a lot of problems in rolling his “R”s.

Is your film nostalgic?

When we were in the phase of sculpting, we asked ourselves, where do we shoot? So when we looked for a flat, we didn’t really like these boxes, these communists blocks. We wanted different scenery. We thought of having the laundry in an older place, with an Art Nouveau interior. And the set designer knew a place like that. So we went there and we saw all these Art Nouveau buildings, but on the street level, everything changed. They were very beautiful buildings, but only from the first floor upwards. But for the store to be filmed, we also needed the street level. It was useless. So finally we found an exterior in Bucharest, and there we built a set from scratch. We tried somehow to be different from what you can see in Romanian films right now. We also built the apartment as a set because we wanted to have more possibilities for the camera, for the light, the depths of field.

Your film was very successful in Romania.

We were very lucky. People who go to the cinema in Romania are very young. When I met with the distributor, he was asking me, “who do you think is interested in your film?” I told him that I thought about people who are married, 35 and up…So he told me, “Okay, I have bad news for you, 90% of the public in Romania is 14-25!” But we have the young character in the film, and he seems to be popular among our younger audience.