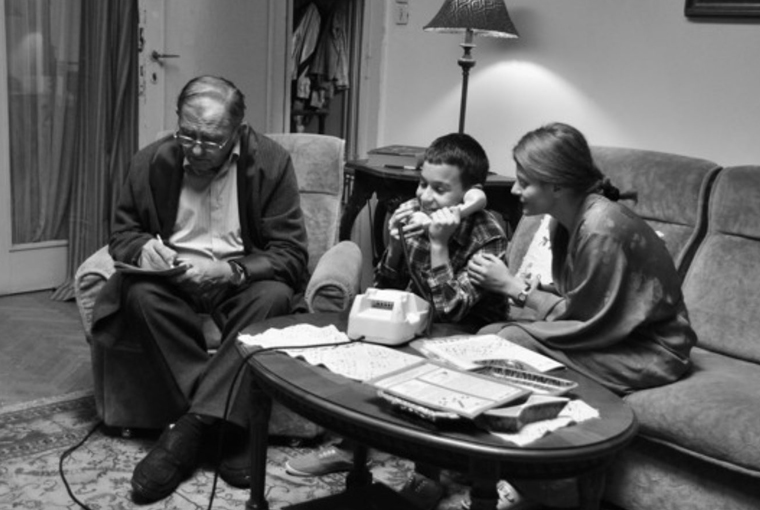 Ducu Buciuman, the in some ways central character in Andrei Gruzsniczki’s Quod Erat Demonstrandum, never appears onscreen. The mathematician has left Romania for a conference in France and never returned. He may have escaped his totalitarian homeland, but Quod Erat Demonstrandum is concerned with those left behind. Living with her young son and aging father, Ducu’s scientist wife Elena is desperate for a passport to the West to reunite her family. Meanwhile, Ducu’s longtime friend Sorin languishes as a math teacher at a university without being able to complete his PhD; unlike Elena, Sorin has declined to join the Communist party and has found himself on a blacklist. While Ducu has moved on, Elena and Sorin pursue their goals in the colorless limbo of 1980s Communist Romania. The frustrated Sorin has at last resorted to smuggling his paper to the West to be published. This attracts the attention of the Securitate and brings in the third point of the triangle centered on the absent Ducu: the policeman Voican. This dutiful bureaucrat, an ironic reflection of the laconic, single­minded detective archetype, will try to manipulate Elena and Sorin against each other in their struggles for escape of drudgery, anonymity, and loneliness.

The film essentially follows these three characters though the moral weight lies on Elena’s shoulders, and it’s no surprise that the film is very complex. It’s reminiscent of Milan Kundera’s earlier work in its ambition to capture an entire network of alliances, compromises and friendships both sincere and feigned within a society rife with everyday betrayal. The film is structured through a series of doublings and parallels. Sorin and Voican mirror each other in their professional ambitions. Sorin and Elena are both living in their parents’ similarly dingy apartments. Elena and the policeman are both estranged from their spouses: Elena physically, Voican emotionally. To drive it all home, Sorin’s work relies on the symmetry of his mathematical graphs.

Moreover, the characters inhabit a highly unified world; some may be more privileged than others, but they are still subject to Romania’s backwardness, isolation and technological stagnation­­ – even the Securitate itself. Voican’s surveillance uses techniques barely more sophisticated than those of Sorin’s mother, who eavesdrops on his conversations with Elena. This is no high­tech dystopia. Instead, the Securitate keeps its grip on unruly intellectuals via threats, insinuations, incentives, and above all, citizens’ capacity to turn on their friends for their own advantage. As one character observes, the West is not the only place where “It’s every man for himself.”

The film pays a great deal of attention to the contracts that govern this society at every level. Public “security,” academic endeavor and private relationships seem to derive support from some form of paperwork. From the signed forms with which Voican seals his bargains with informants, to the “friendship contract” that Sorin, Ducu and Elena co­drafted as college students, to the all­important new mathematics article that Sorin means to publish abroad, papers always represent ethical transactions. Oddly enough, the paper trail that represents Romania’s prying bureaucracy also testifies to love and intellectual endeavor.

One might consider Quod Erat Demonstrandum itself to present a similar paradox. A portrayal of a “gray” land where nothing seems to progress, it nonetheless revels in the artistic opportunities of historical recreation. Gruzsniczki had the film shot in black and white and hired one of the most significant Romanian cinematographers of the 1980s, Vivi Dragan Vasile. The lighting and production design used as many authentic props and lamps as possible. The result is an intriguing alternation of flat daytime lighting and the occasional chiaroscuro tableau, as nighttime spies break the darkness with blinding camera flashes and Sorin conducts his research in the shine of a single lamp. Quod Erat Demonstrandum makes sneaky poetry out of a bleakly prosaic epoch. The equations of human relationships reveal an elegance of their own to those who see them as more than levers for societal control.