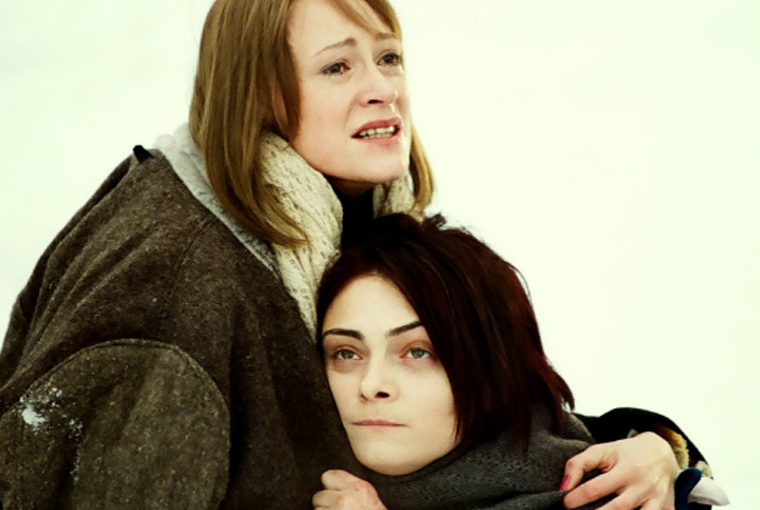 In 2000, 118 sailors died in the submarine Kursk at the bottom of the Barensk Sea in the Arctic Circle. In Shame, Uzbek director Yusup Razykov tackles the tragic accident from the point of view of the sailor’s wives left behind on the Kola Peninsula. The main protagonist is Lena (Maria Semenova), the red-headed wife of one the officers trapped under the sea. Unlike her fellow future widows, Lena stays apathetic after the news hit the dismal military base. While the other women quickly fill in waiting with cohesive and religious activities – group meetings, drinking, prayer – Lena, already alienated from the group, shuts herself in. Slowly, the absent husband turns into an unforeseen blessing. She dates another man and furbishes her apartment. But emancipation and revolt complicate the already damaged relationship with the other women who feel betrayed by her activity. And so does her date, who abandons her calling her a whore.

Perhaps that is why Lena starts identifying with another scapegoat of the town, the senile ex-wife of her husband Irina. Irina is locked up in a horrifying mental asylum where heavy medication is aggravating her situation. Lena buys her out. She brings her home and finally starts developing true feelings for somebody else (albeit the fact that Irina bears striking resemblances with herself, especially concerning husband and isolation). The two women bond and Irina starts regaining confidence and loses much of her “craziness”. So does Lena. In an environment where there’s someone to love and care for, both women recommence to appreciate life.

This seems to be the underlying drive of the film. The missing husbands are not the cause for the emptiness in the women’s lives. They only confront the women with the fact that something has been missing in their lives all along, namely the simple values of existence like taking care for each other, genuine mutual affecting, the love for life, and so on. All of the women prefer to deny this, filling up their incapacity to live such a life with awkward rituals and alcohol. In one scene, one of the woman drops her TV into the sea in superstitious belief that sacrificing her most valuable belongings will help bring the cherished husband back. The whole scene is a performance to prove to herself and the others that “look, this is how much I loved my husband”, while ironically “love”, here, hardly extends the materialistic values the woman attaches to her TV-set. Lena at first only feels the fakeness of this and other rituals and intuitively chooses to act in reaction to the other women. That’s why she decides not to be “sad” for her husband and sleeps with another man. But at some point she realizes that this is basically a return to the same denying mechanisms the other women have refined through their cultural practices. Only another woman like herself, Irina, can help her out to start loving herself again and hence love life.

That is why this film, which sometimes gives the impression of being one of those gloomy Russian exercises in human misery, is really quite powerful and morally upbringing. Of course, it suggests that you have to go through misery, or what the director calls “shame”, to appreciate life. However, his film not only ends on a hopeful note, but on love as a fait accompli. Lena and Irina embrace out in the open, marveling at the beauty of light-green northern lights.