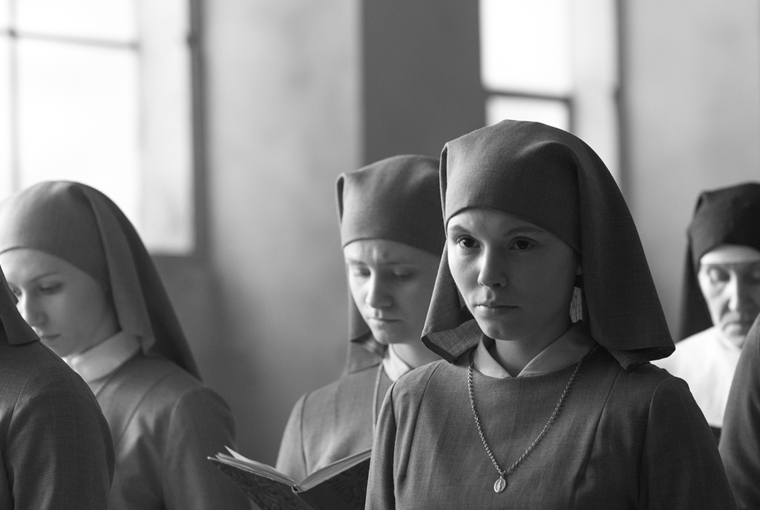 In Ida, Paweł Pawlikowski newest pic, a young nun (Agata Trzebuchowska) is only allowed to take her vows under the condition that she meets her only relative, a chain-smoking alcoholic but astute judge called Wanda (Agata Kulesza). They meet and Wanda tells her niece about her true identity. She was born Ida Lebenstein, a Jew, and all the traces of her family have disappeared.

What follows could best be described as a road-trip in which Ida tries to find her “true” identity. Most of the “searching”, however, gets done by the hardheaded Wanda whose eagerness in finding out the truth and revindicating the injustices done to her relative’s parents largely surpasses that of her fellow traveler. Ida, all the while, passively marvels at her aunt’s repartee when it comes to dealing with most of the people they meet who, sadly, either treat them with disinterest, signs of dogmatic slumber, or with authoritarian threats hinging on outright anti-Semitism. In one scene she sarcastically replies to the question of a bartender whether the “Lebensteins were Jews”, “No! Eskimos.” In another scene, she threatens the new inhabitants on the Lebenstein farm with legal consequences when they refuse to answer her questions. When they finally find Ida’s “past”, it lies several feet under ground in a forest next to the farm. There is not much left.

Ida quickly turns into a parable of the Polish country. The History Pawlikowski wants to tell is that post-war Poland was built on the extinction of the Polish Jews. Even Ida’s Catholicism is unthinkable without the destruction of the Jewish religion.

Ida is as much a film about cinema, as it is about anti-Semitism in Poland. It stages a fairly recent trend in Polish films increasingly undisturbed by showing Polish participation in Nazi-related crimes. Grand Narrative films, from Roman Polanski’s The Pianist (2002) to Agnieszka Holland’s In Darkness (2011), seem to have fostered variations on the question of how much good a person whom history has interpreted as bad can do. These and similar films exploit this plot-twist by creating exceptional characters who stand out as heroes in a largely villainous environment (the victims exempt). Pawlikowski avoids these kind of good-vs.-bad scenarios by having his film take place years later. If Wanda is a hero, she’s definitely too late. Wanda is a master of rhetoric, not actions. Even her most righteous ideas are less weighty precisely because they are only ideas.

Nevertheless, for all its reconstructive realism – the black-and-white, 4:3 ratio – it seems rather unconvincing for the film to take place in the 1960s. If Poland had to wait half a century to start looking at its participation in WWII crimes, and for a wave of films to show up that explicitly confront its audiences with these, how can Pawlikowski explain his two character’s premature interest for the subject? Why did he not make a movie in which his main character would have really been too late, i.e. a movie that takes place today? The fact that Wanda is much too early makes the film as fake as the Grand Narrative films. If Agnieszka Holland retroactively dreams of a savior in In Darkness, Pawlikowski dreams of a different 1960s, a period where cosmopolitan women like Wanda teach feeble-witted nationalists a lesson, smoking, drinking and listening to Jazz. But Pawlikowski’s vision of the 1960s seems to be more inspired by existentialist New Wave movies than by the inability to mourn, a process which he is trying to convey, paradoxically, with two women who do the exact opposite. In the end, Pawlikowski’s film fits neatly into the shelf of those films which kill the past with an overdose of wishful thinking.