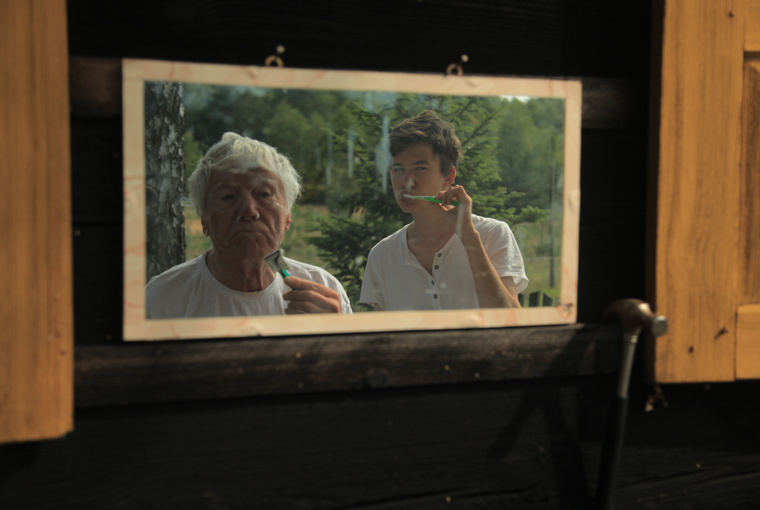 I’ve often wondered what a film which just features people being photographed would be like. The steady fix of their gaze and the quiet hilarity of their unease when the photographer takes too long. The way the subject wavers between two looks, the one they want to present to the camera, and another, more uncertain one. If photos are believed in some cultures to steal your soul, then what does film steal? One may be inclined to say something less. A photo can catch you in an ugly thought, while in film you can erase your last movement every second, every millisecond, replacing snide observations or sideways glances with casual laughter and sparkle.

All these thoughts came to me while watching this quaint documentary about an unusual pair of photographers who travel around Poland to “capture their beautiful country” on camera. Tadeusz Rolke is an acclaimed Polish photographer with a penchant for beautiful women. His 15-year-old student Michał is eager to learn anything his supervisor is willing to share. The first lesson is about human contact. Like Tadeusz, Michał is naturally charming, and many of the images involve the two men chatting with local residents, asking to take a photograph of them.

Both are self-proclaimed shy men, and although Rolke flirts constantly with women and claims to have had a lot of luck with them, there is a certain reticence about him. In rare moments of personal eloquence, they both share their fear of having to be “the one to make conversation”, preferring to let their photographs speak for them. Ironically, and despite their asserted timidity, the film becomes a portrait of these two men; their relationship develops, throughout the trip, into a kind of father-and-son contact. There is the natural impression that Tadeusz is looking for a successor, and his flippant comments about Michał attending his funeral only make the boy laugh.

Some people seem to have the knack for being photographed. In this film, beautiful girls who never seem to blink. The best pictures though, are of elderly people, who appear to have retained a certain degree of reverence for that technology. The photographers print the images locally and give them back to their models – one old woman whose still shows her sitting on a bench with alert eyes and a shock of white hair in a halo around her head, announces proudly that she will put it up on her wall as it makes her look young again. Tadeusz Rolke’s work may be to capture what I would snidely call the moment of affectation that reaches everyday people when they are being photographed. But it’s the unashamed delight of recognition of these villagers when they receive their prints which makes the joy of this short documentary, and makes us understand why Rolke is still filming after all these years.