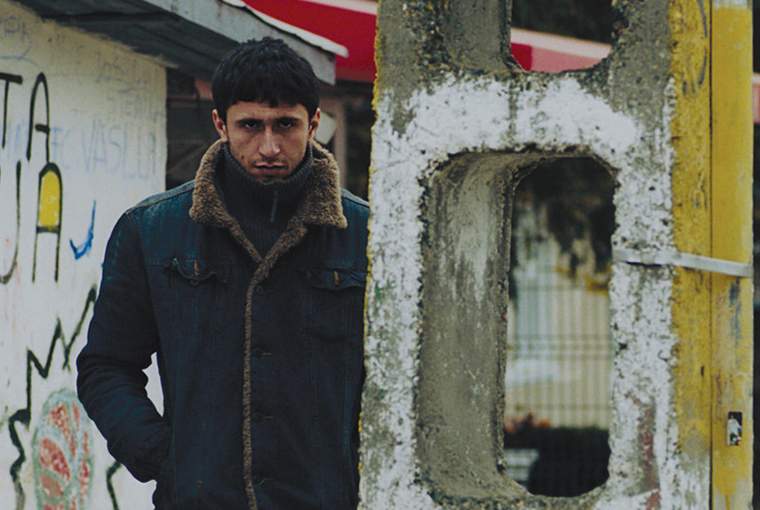 In Police, Adjective an officer has to track down school children smoking pot. The goal is to supply his superiors with sufficient proof of this illegal occupation. “Police Adjective” is not an action film. Nothing could seem less exciting for a young deputy than to chase after students, on foot, picking up gray cigarette butts from gray cement ground under a gray sky.

So the job is quickly done. Waiting is enough for Cristi (Dragos Bucur), the officer, to satisfy the demands of his mission. But he doesn’t seem to be pleased. He wants to see behind things – apparently there is an Italian organization that provides the children with the drugs. The only problem is that nobody else is interested in going deeper, in searching for the truth. He refuses to arrest the children, reasoning that it is too trivial of a crime. As a result, he has to listen to the lessons of his superior, who turns Cristi into a schoolchild when asking him to look up the words “conscience”, “law”, and ”moral”, in order to remind him that the arrest of the teenagers is not a matter of his personal intuitions. But while Cristi’s position against the application of dictionary definitions to arguable situations in real life, might reveal the absurdity of an impassive system of justice, he seems to be as literal as his superior when it comes to his private life. If his boss lacked the imagination to understand how morals could be applied to a concrete situation, Cristi can’t make sense of his girlfriend telling him that life without love is “like the sea without the sun”, “or “the field without the flower.” For Cristi, the sea is the sea, and the field the field, a thought leaving him rather alone for this night.

Romanian films often seem to portray this kind of judgmental conflict, which could perhaps best be described as a linguistic delusion. I tried to illustrate how a political quid pro quo was at the heart of The Paper Will Be Blue. In Dan Pita’s Sand Cliffs, which was still made during Ceauşescu’s regime, the system of justice could not come to terms with an innocent criminal, desperately holding on to a judgment even though it had proven itself to be wrong. As in Police, Adjective, the linguistic delusion of Sand Cliffs was not being able to think otherwise than: a criminal is criminal, case closed.

In her essays, the Romanian-German novelist Herta Müller, points out on numerous occasions how the lack of a sense of truth, the impossibility to question what a word means in this or that situation, reigned over the people’s thoughts in Communist Romania. She writes,

I cannot recall having asked only once: what does “normal” mean? Like with the word “death” I knew, without having to ask, what “normal” meant. I could see it on the others, what this word demanded from me. Unwritten laws ruled in the heads of the people, like public opinion. They separated everything that was there into true and false. But this public opinion also came from the heads, that it ruled over. It always worked against the individual. The word “normal” is only consistent in a collective. It thrusts people into becoming dependent on their community. It prints into the mind an urge to belong to the community.

In Porumboiu’s film, the necessity to give the right meaning to names, seems to have a similar threatening effect. Cristi, not even trying to establish his own definition on how to behave, but questioning the existent one, is overruled by the invariable glossary of the community. His superior is thus not the exclusive instance of legitimizing words, thoughts, and actions. He only puts a shared “norm” into an absurd gesture. During the scene of the dictionary reading, a secretary is called into the office. The superior wants her definition for the word “conscience”, which she supplies saying that it is the belief in God. He then uses her answer to justify the purchase of more dictionaries. Ironically though, the superior and the secretary are on the same comprehensive level. They both displace conscience out of their own responsibility. Taken a step further, the secretary as well as the superior imagine that the world can be said without humans. Is this movie not about the omnipotence of an abstract (non-human) epistemology? The linguistic delusion not only turns true and false into collective values, but in doing so, turns its collective into an inhuman set of true and false values.

However, the interlude of the secretary also has comic effect. After all, taking things for what they are not (God for a dictionary) has always been a safe trigger for laughs. The black comedy often associated with the Romanian New Wave, is also based on a linguistic delusion. Used comically, it reassures us of the fact that we are humans, that we can decipher the concrete (true) meaning of an abstract (false) statement, and even laugh about it.