Nostalgia, and the Western Promise 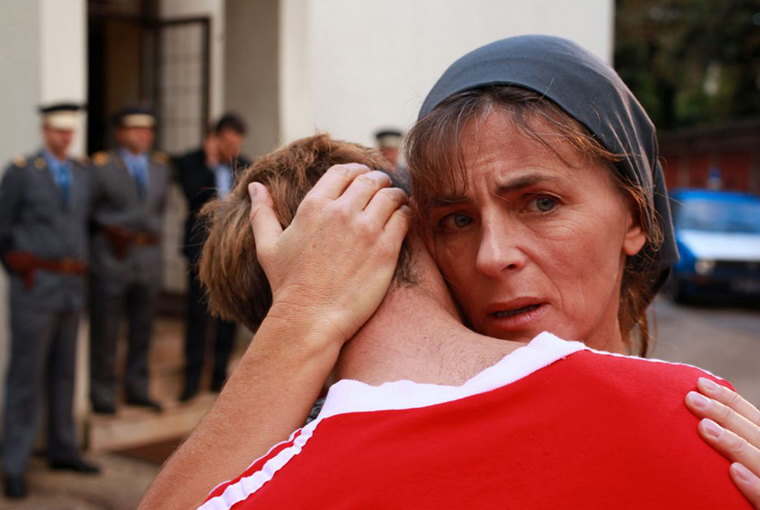 Herzegovina 1990. Divko Buntic (Miki Manojlovic) returns home from Germany in a Mercedes to move back into a house he left behind 20 years ago in an effort to escape Communism. Seated next to him is his much younger fiancé Azra (Jelena Stupljanin). Now that the dictatorship is over, the couple is eager to settle down and enjoy the Deutschmarks Divko earned abroad. They want to start all anew but not everything is as easy as Divko imagined it to be. His bad luck begins when he looses his black cat, a talisman he found in Germany, that apparently changed his luck after a difficult start. Divko’s son Martin (Boris Ler) is also less grateful about the return of his father. Because of family ties to the new non-communist mayor, Divko quickly claimed legal ownership of the house Martin and his mother Lucija (Mira Furlan) lived in for over 20 years, forcing them to move into an old barrack with a Socialist flair. And although Divko asks his son to live with him and Azra, he only goes back to the house for his clandestine radio station, and later for Azra with whom he falls in love.

The past catches up with Divko. The more he tries to return to the old customs and habits for which he returned, the more he looses track of his fiance, and their plans to start a family. Azra is quickly disillusioned by Divko’s promises: she doesn’t like the food, the music, the wheather, and she is not at all enthusiastic about Divko’s intention to turn her into the local hairdresser. Her only friend turns out to be Martin who later convinces her to go back to Germany with him. Ironically though, it was Divko himself who brought them together when he forced them to look for his lost cat day after day – a job that quickly becomes an excuse for romance. But from the start Divko allowed Azra and Martin to despise him for his cat obsession. This not only turns him into a kind of matchmaker but also puts him into the position of the antagonist.

There is also a threat in the future. News on television talk about a war in Croatia; the town’s military is exchanging the red stars on their uniforms with Serbian flags; Martin’s friends join the local militia. Divko, who returned to find peace doesn’t really seem to realize the situation. He is resolved to stay. His ex-wife is more careful and decides to leave to Germany with Savo, an ex-army officer, her son and Azra. But the night before their flight, Martin is caught when he tries to warn Savo that the militia is planing to storm the military camp. In a life-threatening but imperious act, Divko saves his son out of a cellar, where he was held captive and beaten. He then surprisingly helps his ex-wife, his son, Azra, and Savo, to get away by giving them his car. He also gives his son a large amount of money and changes his mind about having something against his fiancé leaving him for his son. The four drive into the night, but on the next day, Lucija returns to the village with the cat in her arms. When Divko invites her to take a ride on a carrousel, the end seems almost to good to be true. But bombs begin to hit the other part of the village, ruining the promise of an all’s well plot.

The strongest parts of Cirkus Columbia are its reflections on nostalgia. Nostalgia in Cirkus Columbia describes the impossible attempt to recover lost time. Even though the way the film depicts the present (the time right after communism and before the wars) might already seem nostalgic – always a bit too sunny, too easy, too happy – this too-muchness has to be related to the way the characters themselves see the world, especially Divko. What Divko is looking for in returning to his hometown is the possibility to relive lost time, the time that the political situation in his hometown took away from him and that he was quarantined from while surviving in Germany. This has nothing to do with the present. All of his actions are built around reestablishing a past moment in his life. His younger wife can give him the illusion that he is twenty again, that she is, in fact, the wife he left behind who also worked as a hairdresser. His car, a Mercedes from the 60s, also has to be seen in connection to this impossible dream.

The weakest part of Cirkus Columbia is an intentional or non-intentional over-belief in Western values. Divko returns like a Messiah from the West with every cliché Made-In-Germany-Trademark one might think of. He really has a messianic role for his family, securing the lives of the younger generation, and sanctioning a ground zero from which everything is possible. In the end, even the red-headed fiancé only appears to have been a gift for his son. Indeed, one might ask whether Divko only returned to clean up the no-go habits of his family. He is like a political adviser reconstructing the lives of the underdeveloped ex-Communists with the help authenticated through Western standards. This aspect is in an odd contrast to the nostalgic element of the film. How can Divko at once represent a Western promise – of material prosperity and peace – and regress into an imagined past from where any reference to this promise would seem impossible?

This might be one of the major problems of today’s Eastern European society regarding the West. While most Eastern European countries have accepted a “Western” model of society, the belief in the possibility of an ideal past that can be recovered by the future still prevails. This is a vicious cycle. For as long as one thinks that one has been robbed of one’s past, and that it is up to some indistinct future to give it back, it can never be possible to accept any present time as the basis for realizing all those ideals lost.