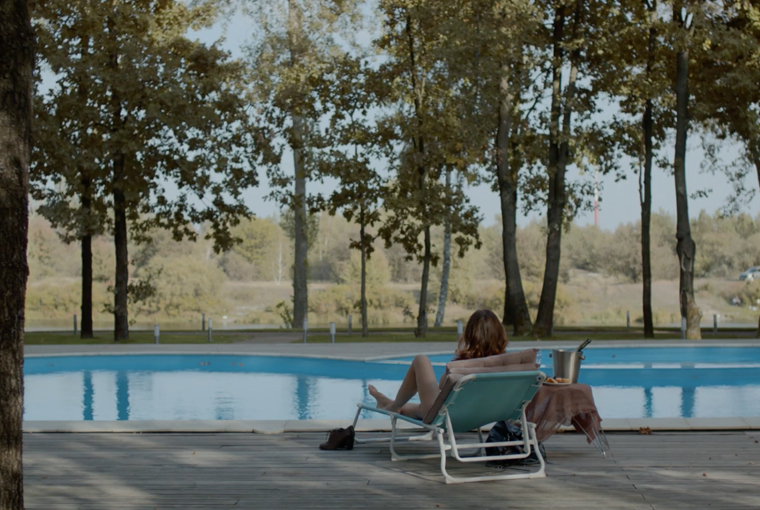 In the wake of her husband’s death, Olga (Alla Binieieva) drifts through Kiev as she processes her feelings and tries to re-negotiate her place in the world. She decides to push this feeling of loss to an extreme by ridding herself of her belongings and money in order to achieve some kind of personal purity. As she does so, she encounters various figures in a series of vignettes, some more conventional and some more surreal. At one point she comes home to find her mother-in-law rifling through her flat, in the conviction that she intentionally allowed him to die for financial gain. On another of her drives around the city in her newly bought car, she spots a troubled looking young man who has lost the ability to speak and takes him into her care.

Within her journey of self-discovery, Olga becomes some kind of Zen guru, who not only speaks exclusively in profound pronouncements but even develops the power to heal. In this respect, the narrative forfeits a certain amount of momentum as she seems to be validating decisions she has already reached rather than making any kind of progression. The only exception to this is her detached approach to grieving for her husband, which proves unsustainable as she is eventually overcome and ultimately ends up attending the funeral she intended to boycott. While some of the pontificating and out of context philosophizing that takes place can be grating, one of the strengths of the film is its refreshingly frank and nuanced depiction of relationships, from family bonds to romantic love and sex. It challenges conventions and encourages a questioning of preconceptions about the way we relate to other people and our expectations of them.

One of the dominant subthemes of the film is a disdain for material gain and money as motivation. Olga deliberately and brazenly leaves a trail of 500 hryvnia notes wherever she goes, drily observing that Hryhorii Skovoroda, the anti-materialist philosopher who appears on them, would probably disapprove of his image being appropriate to this end. When a gigolo offers her his services for 5000 hryvnia, she contemplates whether that is an appropriate way to spend 10 Skovorodas, ultimately deciding against it. Where these notes do end up is with the undertaker, whom she also accuses of exploiting grief and religious sentiment for profit. She comes to loathe the flat she claims her husband killed himself trying to pay for, simply because it was the done thing. In her most flamboyant act of largess, she orders a string of cocktails, one for every year she was with her husband. In narrative terms, however, she is only permitted this luxury of moral superiority and ostentation because her own work and financial situation goes conveniently unmentioned.

Another key element in the film is the city of Kiev itself with its characteristic housing blocks and convoluted motorways. More a protagonist than a setting, the urban architecture does not so much reflect Olga’s emotions as inspire them with its geometry and plays on depth. Olga claims to prefer the city at night, when there are no other people around. The glowing lights in the windows of the high rises belies this notion of emptiness, recalling instead that she is always and inescapably surrounded by others. While clearly something of a love letter to the sprawling metropolis on the part of the director, these montage sequences nevertheless contribute to the atmosphere of the film as well as the characters’ interior landscapes.

Overall, however, both in its visual language and its dialog, Chrysanthemum’s Time is not quite as intellectual as it would like to be. The last scene in particular goes a long way to dispelling the carefully crafted ambiguity of the rest of the film by explicitly and clumsily recounting the history of her love life in chronological detail. This sadly undermines some of the more interesting moments in the film, such as one of the more tonally nuanced and accomplished scenes, in which she visits a presumed (and ultimately confirmed) former lover in his workshop. Not only do the intimacy and aesthetics of the space contrast starkly with much of the anonymous outdoor locations, shifting the tone and meaning of the exchange between them, the conversation is pitched nicely between a convincing conversation and subtle evocation. Likewise, Olga experiences a fleeting interaction with a mysterious woman carefully composed against the wonderful and intriguing Brutalist crematorium in Kiev’s Memory Park, which not only looks otherworldly on screen, but was in fact designed specifically as a site for dealing with psychological trauma. Any space for individual interpretation in the meaning of the encounter or the identity of the woman is also dispelled in this final reckoning of the expository accounts. With the ending, and perhaps with the film as a whole, Moyseyev should have had been bolder and had more confidence in his ideas, something he will hopefully do in future work.