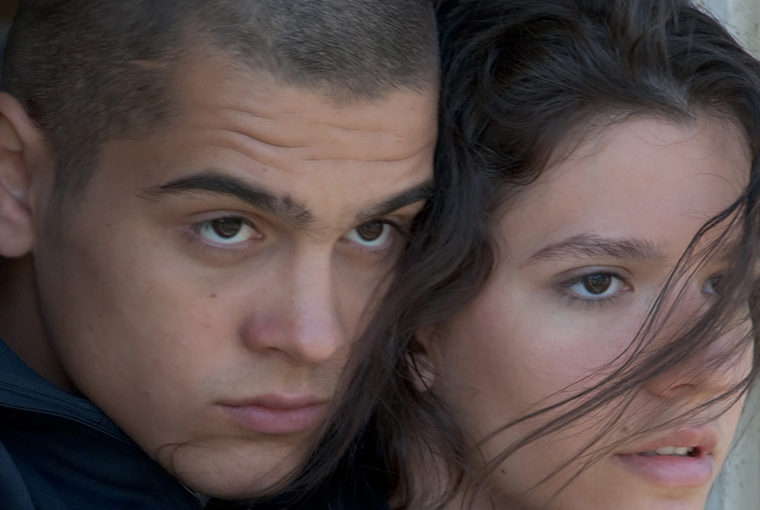 The first full minute of Director Florin Şerban’s award-winning début film, If I Want to whistle, I Whistle (2009) is completely bare of music and dialogue. An idyllic semi-rural soundtrack of chirping birds and a gently creaking door accompany a view of a low-slung bungalow-style building on what we learn is the state property of a boys’ juvenile prison. Several boys wait, seated in a line on a bench, for their fellow inmate who exits the building, handcuffed, to rejoin them. Looking dourly at his lap, after a moment the inmate smiles, looks at his neighbor, jokingly embraces him with his manacled hands, and kisses him on the top of the head.

Could this first minute, shown before even the title of the film appears onscreen, summarize Serban’s project ? It certainly indicates the nature of the scenes to come: rude juxtaposition of life imprisoned and signs of spring, silence from the characters and understated action. Like the Belgian Dardennes brothers, the camera follows the main character, 18-year-old Silviu (George Pistereanu) via a hand-held camera aimed like a gun to the back of his head. Whereas this serves to show the futility and violence of poverty in southern Belgium for the Dardennes, here it echoes the eyes of prison guards and even the other inmates who seem to survey and punish between them, creating their own system of reprisal.

Silviu is particularly under watch, since we learn early in the film that his four-year prison sentence is coming to an end in 15 days. The significance of fifteen days, which could arguably be taken for the reason for the festive head-kissing of the first scene, drastically changes for Silviu when his younger brother Marius (Marian Bratu) comes to visit him in prison.

Here, Serban shows sincerely, understatedly, but clearly, our main character taking pains to wash his shoes before seeing his brother in the visiting room, and the juxtaposition of these naïve efforts for hygiene with the stony expression and silence with which he greets his grade-school brother. Whether he is unable in person to express the consideration he showed while washing his shoes, whether he doesn’t want to, or whether a verbal or facial acknowledgment of care is irrelevant, the emotion that is there is artfully shown in actions without being a cloying tableau of family devotion.

Marius informs Silviu that their mother, who had left Romania for Italy to work, has returned and wants to take Marius back to Italy with her. After the visit, the rather idyllic scenes of the film’s beginning – manacled hugs, the boys singing anti-prison songs during periods of manual labor, Silviu’s concern for the presentation of his shoes – are put into perspective by a scene of brutal violence against the main character when he approaches a fence to watch his younger brother leave the prison parking lot.

The prison guards are portrayed by Serban as deeply ambivalent participants in an inherently inefficient system instead of like monsters or robots as other prison films do, and they are only a fraction of Silviu’s problems. In the scenes that follow, we witness violence between inmates, an attempted escape, and the tragic relationship between Silviu and his mother which torments our main character more than any of the physical oppression he experiences on a daily basis.

All while showing a fragile woman, doubtlessly undergoing physical and emotional hardships on a level comparable to Silviu’s, Serban shows us the amount of pain her relationship with her son engenders. “You’ve destroyed my life !” cries Silviu in a violent outburst during her visit. Vehement that the abandonment he feels from his mother won’t also be the fate of his younger brother, an abandonment that he attributes his incarceration to, he verbally fights against the pain he endures in silence in all other scenes. The traditional roles of mother and son are almost reversed, as Silviu reproaches his mother and she seems almost to beg for forgiveness. Deeply troubling, the scene shows two profoundly wounded human beings who life has led to hurt one another despite themselves.

As the film continues, Silviu’s frustration with his family situation which threatens even the sense of his imminent liberation, escalates into a violent hostage situation. Silviu’s demands are tragically small-scale: to see his mother, to finish an interview with a beautiful social worker, to go for a coffee. Nothing is a stronger argument against the prison system than seeing a young man pushed to violence because it is his only means to go for a coffee.

However, Serban seems to believe that it’s not just the prison system that restricts Silviu’s means of expressing himself. His painful family life, ripped apart by the Italian work immigration that is so common in Romania today, the manipulation of his fellow inmates, and his tragic distance from the tenets of “free” life (contact with women, his family, projects of his own) all combine to sentence him to a futile cycle of expression through violence.

Trapped in a life that is degrading and disempowering, the only manner in which he can regain a voice is through the reenactment of the role of “dangerous criminal” which he has been assigned. Participation in the system through a hostage scene that seems straight out of an American gangster film is the only path to agency. The absurdity of the brutality for the smallest of requests adds to the poignancy, which makes the sequence even more absurd.

The last scene is much like the first. Oppression, as always, is background in terms of plot, but onscreen we see only the drab outskirts of an anonymous Romanian town: the chirping of cicadas, the sound of a freeway, and a vision of nature with the occasional passing of cars. We don’t see the prison, the guards or inmates, but yet it seems normal: this is a study in confinement in which the prison is incidental.