A Silent Cry for Help 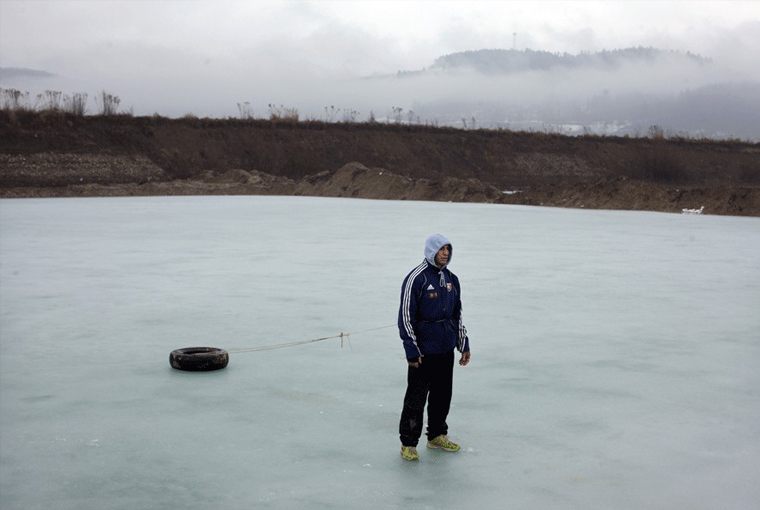 What do you do when your wife wants an abortion? For Koza (Peter Baláž), an ex-boxer and scrap collector, options are scarce. Unable to draw enough money from social benefits, he turns to his laconic employer Zvonko (Zvonko Lakčevič) for help. Koza’s boss refuses to even consider lending Koza any money, but the two agree to try their luck boxing – Koza as fighter, Zvonko as manager and driver. One third of the earnings is to go to Zvonko, another third is to cover gas and other expenses, and lastly one third is reserved for Koza. Just enough to pay for his wife’s abortion. The deal seems suspicious from the beginning, but resists comparison to the things done to Koza at the hands of Zvonko later into the film.

As it turns out, Koza really is an ex-boxer, with his opponents seldom taking more than one round to knock him out. Zvonko uses that as an excuse to withhold Koza’s share from him, arguing that the organizers on the tour won’t pay them unless he improves – an explanation the camera reveals to be wrong. While the pseudo-fights pictured in the film appear to question the candor of the sport (cf. Mickey Rourke’s recent fight in Moscow), they endanger Koza’s health, whose fate soon demands our full attention: Zvonko’s parsimony and/or sadistic strain make him train Koza to the point of sickness. At one point, he even hires ex-boxer Franek (Ján Franek) as a coach, but the alcoholic veteran proves unfit to either fulfill Zvonko’s demands (upscaling Koza’s boxing) or those of the audience (relieving Koza from his misery). The film thus dwells on Koza’s misery for a lengthy 75 minutes, with Zvonko’s late moments of apparent humanity feeling both ambiguous and belated. A well-deserved post-screening applause for main actor Peter Baláž at the Berlinale provided me with much-needed absolution, a service non-festival viewers can obviously not count on.

Koza’s single off-ring outfit is a blue jumper from the Slovak national team which points both to better times (in 1996, Koza took part in the Olympic Games in Atlanta) and the film’s wider ambitions: the master-slave relation between Zvonko and Koza has implications reaching far beyond their microcosm, though Ostrochovský leaves any generalist conjectures to the viewer. Does Koza’s fate represent that of Slovakia? Or the way the the country treats its heroes? Either way, the white lettering on his back (“Slovakia”) leaves its mark on the viewer. If Koza’s mental disability and Roma background could potentially figure as reasons for his precarious social standing (why should a disabled have to risk his life to pay for an abortion in the first place?), Ostrochovský refuses to reduce his protagonist to either stigma. Dignity is more integral to the film than pointing out the obvious, even if the former is occasionally in question due to the persistence with which Ostrochovský punishes his character.

Ostrochovský joins his fellow Slovak filmmakers in fighting despair with recognition and understanding. Contemporary films from the country are visibly tied to economically and spatially peripheral spheres of life, whether the theme is prostitution (Made in Ash) or right-wing radicalism (My Dog Killer). Clearly, such creative decisions are in large part economically motivated: Poland had a similar sub-urban phase in the 90s that ended with the advent of the Polish Film Institute. Though still largely ungentrified, the indigent parts of Warsaw and Katowice have long been abandoned by most domestic filmmakers, who now favor large-scale productions that appeal to mass audiences (a similar tendency can be observed even in Romania, which like Slovakia, is more dependent on cross-national co-productions). International attention might make the sun go up in Slovakian films after all.

One can’t help but sympathize with the Berlinale organizers for selecting a film which never loses its direction. The cinematography (Martin Kollár) is restrained yet breathtaking, able to aestheticize without sacrificing authenticity, while non-professional actors Peter “Koza” Baláž (apparently acting as himself) and Zvonko Lakčevič (hopefully not) easily outperform many of their established counterparts in the Berlinale. Of course, its technical mastery only aggravates the penetrative effect of the story. Ostrochovský questions whether we are really comfortable with not looking away. He has every right to do so.