Beauty From the East 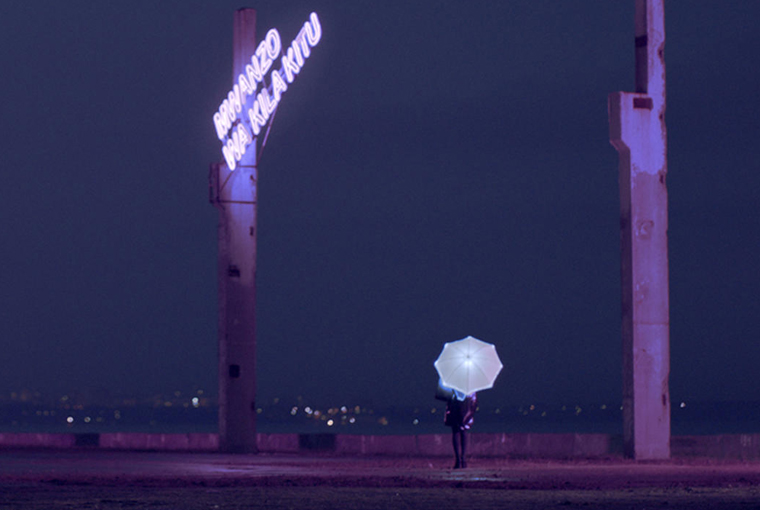 Under Electric Clouds adds to the long list of Russian films that reach out for mystical truth. Half-poem and half-canvas, Aleksei German Jr.’s latest work demands complete trustfulness from viewers: rationalizations are of no avail, a flaw which also smothers German’s diagnostic efforts. Attempting to explain no less than Russia in its entirety, German’s excessive ambitions are his biggest enemy.

German’s movie opens with a Cezanne quote and is very much about visuals. Every other of the carefully arranged and choreographed shots are hauntingly beautiful and often able to compensate for the plot’s bland, episodic progress, which sets off with a short exposition. The time is 2017 or hundred years after the Russian revolution, a voice-over reveals. Apparently, we are not to make too much of temporal continuity – “we constantly jump in times” -, the voice warns us, a promise later redeemed by a character who keeps dreaming of his youth. First, we follow a Kazakh construction worker roaming around an icescape that is deserted because of war-like fighting. Clutching on to an over-sized magnetophone, he witnesses a murder and overpowers the perpetrator. The character – practically dumbstruck – wins us over with seemingly nothing, revealing what German can do without doing any talking. But soon, our Kazakh character is left behind as the language of humanity is replaced by that of highbrow intellectualism. With the conversations, the problems begin.

If we are to trust German, the near future is a dark place not all that different from today. The plain riverbank where much of the film is set would seem historically indifferent if it weren’t for the futuristic cityscapes and sky scrapers that linger in the background. One such building – seldom filmed in full view – is deliberated in several of the seven loosely intertwined chapters German’s film consists of. Whereas every layman appears to have an opinion on how it should be crowned, Petr (Louis Franck), its architect, is more interested in the desolate state of the world than that of his building. In fact, all of German’s protagonists share such attentiveness to things that really matter. Sasha (Viktoriya Korotkova) and Valya (Chulpan Khamatova), two youths mourning the loss of their father, want to dedicate their lives to philanthropy and art, while academic-turned-tourist-guide Nikolay (Merab Ninidze) is something like a 21st century Prince Myshkin (The Idiot) – an idealist hero whose ethical wholesomeness would be unrecognized if it weren’t for art.

If German’s characters are likeable and fleshly, they also seem confused and steeped in naïve nostalgia. German sounds like the caricature of an angry old man when he lets his name-dropping protagonists state that times used to be better, or that people once used to know who the likes of Brodsky, Chekhov, Malevitch, Solzhenitsyn or Tolstoi were (a complete list of mentioned names would go on for much longer). Worse yet, he makes no effort to explain why the contemporary world is destitute, what this loss means, and why Under Electric Clouds is any better than the supposedly vapid artworks that appeal to the masses. Instead, he asks us to just believe him. If bringing back our classics is the answer, making a historical drama might have been a better approach (though the loss of robots and celestial advertisements would of course have to be compensated). Radu Jude’s historical epic Aferim! is proof enough that time travel for pedagogic purposes is also possible back in time.

Though German told me he understands his film as a sort of manifesto, it lacks any revolutionary potential. Ironically, its vague messages make it oddly international: complete with allusions to the country’s big names (Lenin makes several cameos as a stone statue), the film nevertheless has little to say about Russia that would not be true of any other country as well (e.g. that it is intricate, full of contradictions and deeply divided). Not that one doesn’t recognize Russia in it. The predominance of xenophobia, corruption or inequality is forcefully captured, and the film’s masterful aesthetics, choreography and set design resonate with the atmosphere pervading Russian cinema (past and present alike). But unexplored, the country’s problems seem almost contingent. Stringing together narrative after narrative and theory after theory – a typical scene consists of a character walking, pontificating, and then gazing around -, the director suggests that greater conceptual complexity will automatically result in greater insight. German stated at the Berlinale press conference that no other approach would have allowed him to capture the Russian soul. Perhaps a film, however complex, is not enough to express a nation’s “soul”? And maybe, it’s not what German has to say, but how he says it that is most revealing in this respect? Under Electric Clouds is unable to verbalize the alleged essence of what constitutes Russia. As a lyrical film struggling to tackle the impossible, it still ends up fairly close to where it wanted to get.