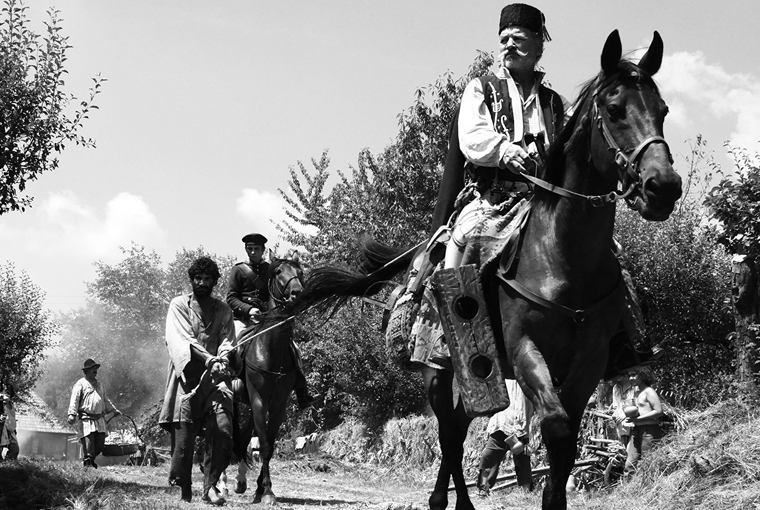 Radu Jude’s Aferim! is a patchwork of literary and cultural influences. Set against the backdrop of Roma slavery in 19th century Romania (Wallachia, to be precise), it manages to accommodate both lighthearted comedy and thought-provoking tragedy – a perfect cocktail for audience-based film festivals, and an important (if not altogether revolutionary) step towards a self-critical approach to history in Eastern Europe.

Constable Constandin (Teodor Corban) and his son Ionita (Mihai Comanoiu) are on the lookout for a runaway gipsy servant who stole money from their landowner. Seemingly intent on showing Ionita how to become a man (he even shares a prostitute with him), Constandin uses blackmail and deception to find his way around Wallachia. Which doesn’t keep him from declaring that he always stood behind the law, a claim incompatible with both his behavior and the stories he tells about his licentious youth.

Aferim! stresses that racism loomed large in 19th century Romania – a phenomenon which wouldn’t strike us if it weren’t for its overbearing prevalence. Jude made a research-heavy effort to base his movie on historical documents and literary works and doesn’t spare us the details. An amusing rant by an orthodox priest gives us a first idea what people thought of foreigners and minorities back then: Italians lie, Germans eat too much, and the Roma (“crows”) get beaten. The last part is painfully accurate – those whom we encounter are slaves, ex-slaves, and slaves-to-be. Not all is about injustice, though: the black-and-white film has many moments of comedy that pass on the region’s joie de vivre (a long sequence in a tavern is a Chekhovian multi-character farce that lacks nothing).

As we familiarize with 19th century Romania, it becomes clear that Constandin is not the anti-hero we long take him too be. When he pressures an elderly peasant into admitting that he’s hiding the fugitive Carfin (Cuzin Toma), dogmatically contradicting him and applying force when he signals uncooperativeness, our growing alienation is suddenly tested when it turns out Carfin really was hiding at the man’s house. How can one be expected to comply with rules when there are none? Jude’s question resonates with those raised in previous Romanian films (including his own). Rather than resorting to finger-pointing, Jude shows that constable and servant are part of power relations where moral questions cannot simply be answered in isolation. This differentiated approach speaks in favor of Jude and is a rarely honest effort to overcome all kinds of systematic injustice which obviously still plague us today. “I wonder what people in 200 years will think about us,” Constandin inquires, asking us to think twice.

Doubts in the system are not only anachronistic projections from the audience though. Seemingly troubled by their captive’s prayers for mercy – Carfin realistically fears for his life -, Ionuta asks his father to consider setting him free. Constandin’s harsh rejection is later moderated by his own attempts to manipulate the landowner into sparing Carfin. At any rate, the landowner already has a punishment in mind – the fact that he seems to put up with its illicitness (“So what!”) is evidence enough that Jude is not all about withdrawing judgement on grounds of timeliness. Hegel would be happy with this film, in which the system not only fails because of not meeting external criteria (today’s moral standards), but because it doesn’t even adhere to its own (the law).

Where Jude was praised for diagnosing Romania, it’s such universal findings that make his film deliberative. As a historical film addressing a region’s specific troubles, Aferim! may be accurate, but is devoid of offering major observations. Like Aleksei German vis-à-vis his latest film Under Electric Clouds – an attempt at diagnosing Russia -, Jude fails to acknowledge that Aferim! is more about a specific time than place. Though his film resists the temptation of romanticizing Western Europeans à la Django Unchained, where they are presented as morally and culturally superior beings that shudder at the view of inhumane penal practices, Jude neglects how “normal” Eastern Europe’s 19th century racism and legal system would look in an international context. Maybe, Parisians treated their servants better than Romanians did at the time (as a character from Aferim! suggests), still they were hardly foreigners to racism or nationalism themselves.

If failing to clarify why retrograde views are still dangerously prevalent in the region today, Aferim! does remind Eastern Europeans how trite and old their views really are – just the kind of self-critical approach we need. The film also makes an important contribution to the popularization of Roma history, whose plight is shown to have structural reasons reaching back at least to the 19th century. This, as well as meaningful philosophical observations may be the greater insights for viewers than learning that Romanians were chauvinists in the 19th century. After all, we all were.