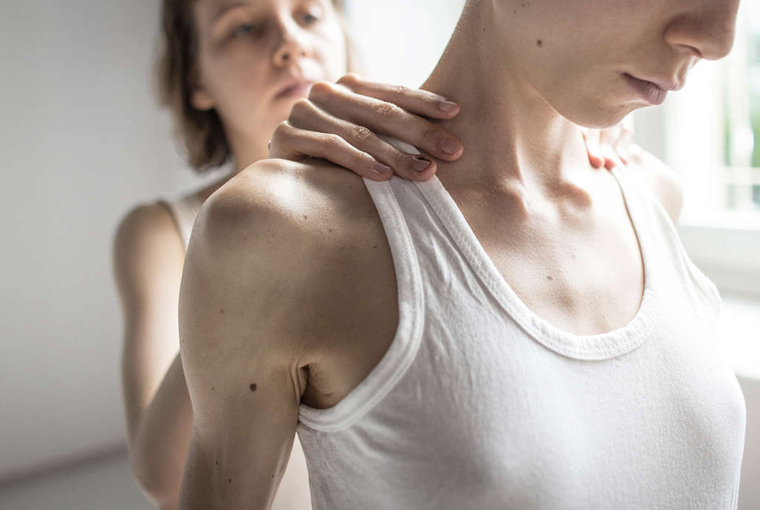 Małgorzata Szumowska returns to the Berlinale competition with a spongy dramedy; funny on the outside yet stern on the inside, Body follows the intertwined fate of three characters with widely dissimilar attitudes towards the human body. Its aimlessness will scare off skeptics but appeal to Szumowska’s fans, who are in for another non-judgmental meditation on a vaguely defined theme.

The story first introduces us to a nameless coroner (Janusz Gajos) whose grumpy temper matches his job description. The prosecutor arrives at a crime scene to investigate a possible murder – someone spotted a male body hanging from a riverside tree. But when the rope is cut and the present officers begin discussing business, we witness the supposed victim rising and tottering away, a scene which drew scattered laughs from the audience during the screening I was at. Body uses black comedy to disarm its delicate subject, an approach which not so much offends as risking viewer detachment.

Luckily, not all of Gajos’ scenes are about laughs. A postnatal infanticide at a railway station sends shudders even through his colleagues who refuse to inspect the crime scene – only a young, frightened stenographer is forced to come along. The coroner’s calm on-scene dictation for the protocol may well be the strongest scene of the film, in large part because the camera spares us a reverse shot from his point of view. Indeed, it is not the murders, but the coroner’s apathy Szumowska draws our attention to, which turns out not to be just an occupational illness, but more of a profound void that the death of his wife has left behind both in him and in his anorexic daughter Olga (Justyna Suwała). Olga is the second protagonist of the film, her fate and suffering long evolving independently. That is until he finds her battered at home, with half-digested tablets and sheer vomit decorating the toilet bowl. This time we’re not spared the view, which fact seems straightforward enough: this tragedy is really relevant to the story, and indeed we feel remotely invested at last.

More bugged than worried, Olga’s father takes her to a psychiatric clinic. There she meets therapist Ana (Maja Ostaszewska) who has gone through the experience of loosing a loved one herself. Grief is not Ana’s only problem though: living alone with her over-sized dog, she watches with envy as a neighborhood couple exchanges kisses and gropes. The troubled-therapist-cliché is partly overcome by the fact that Ana is a spiritualist who believes she can communicate with the deceased. This gives rise to a number of scenes which try to be both funny and caring, but are in fact neither, which seriously calls into question the feasibility of Szumowska’s laughing-about-yet-not-judging approach. What makes us laugh if it isn’t our overbearing judgement?

Of course, we’re in a Szumowska film, where any obvious dogma is only introduced so that it can later be overcome. The coroner shares our doubts about Ana when she tries to foist supernatural messages on him. A few right guesses and deceptions later – the possibility of actual providence is obviously left open -, Ana, Olga and her father sit together at a table (literally) to try and communicate with Olga’s mother. Yet just when it appears that Szumowska will resort to supernatural powers to resolve her narrative, she doesn’t. Eureka! Szumowska repeats her trick from Elles, where it long seems that Juliette Binoche’s character will be able to solve all her sexual trouble by learning to understand student prostitutes, but then isn’t. What a pity for the viewer indeed, who has to listen to poor solutions (give in to superstition) to serious problems (how should one deal with the loss of a loved one) throughout only to have its author reveal them as that – poor solutions that only work for some people. Whoever does not fancy Michał Englert’s chilly aesthetics or the film’s characters (performances are solid) has very little to identify with.

If Szumowska were a philosopher, she’d be a skeptic: after making us doubt the damnability of prostitution (Elles) and gay priesthood (In the Name Of…) in her last two films, she steps it up in Body by flirting with spiritualism. In fact, fellow competition entries Under Electric Clouds (dir. Alexey German Jr.) and Knight of Cups (dir. Terrence Malick) similarly favor awe and aestheticism before trying to answer the big questions of life. Intuitively, that approach has its merits and justification. How indeed could one possibly tackle the complexity of life? Or the world? Where Malick at least prescribes humility and all-embracing communitarianism as a remedy against Weltschmerz (you saw The Tree of Life), German and Szumowska choose to behave more watchfully. Which is perfectly legitimate, but hardly revolutionary. Yes, the world is incredibly complex. And yes, most questions don’t have easy answers. But it’s much more difficult to replace false beliefs with right ones. If you question the existence of the latter, there is no need to dwell on the former – they’re all you got.