There Was Always Something There 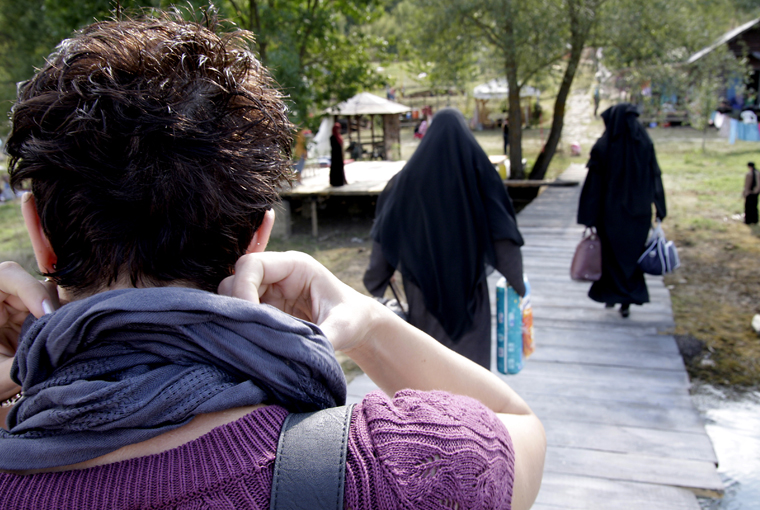 Before Amar, a young flight controller in Sarajevo interpreted by Leon Lucev, is suspended from work for drinking alcohol, and before he meets Barhija (Ermin Bravo), an old comrade from war who introduces him to an Islamic belief called Wahhabism, he seems happy in a relationship with Luna, an adorable stewardess played by Zrinka Cvitesic. But their plans on having a baby, the weekend-trips to the country side, the nights drinking and dancing at the club, in short, everything that tied them together is cut short when Amar decides to become a “true Muslim.” As Luna asks him to talk, trying to understand where the Amar she so dearly loved got lost, trying to win him back perhaps, he answers “there was always something there.” This might be the only real sentence we get to hear from Amar, who is not very talkative from the start, the rest of his speech remaining rather opaque: for example when he says “I love you”, and it is hard to determine what “I” or what “you” he means.

But if “there was always something there”, then the car accident that lead to the encounter with Barhija and to his change of life, can neither be a coup de théâtre nor can it symbolize, in a convincing way, the crashing of a love life that might have been shattered all along. “There was always something there” that separated them, that made their relationship not as comfortable as it seemed. But what?

Two rather suggestive cuts before the car crash might lead to an answer. The first begins with Amar and Luna in bed. Amar is already asleep snoring gently beside Luna who is enjoying the intimacy so much that she captures his profile with her mobile phone. Later she will replay the video, wanting to repeat something that, for her, has disappeared. The sequence that follows the bed scene begins with the close-up of someone cracking a nut. The shot of the cracking nut is centered, and by comparison to the one before, it shifts into the space that separated Amar’s and Luna’s heads in bed. The second cut is similar in its method but aggravates its dramatic effect. The scene begins with a kiss that is replaced in the next sequence with a shot of a sparking grinding machine.

These images might speak more than the words of the main character but make sense of his surprisingly self-conscious observation that “there was always something there.” Harmony is thus disrupted throughout the film by short flashes of violent distortions whose sexual context seems to predict the restrictive attitude Amar later imposes on his sex life. Indeed, violence in On the Path is most strikingly revealed through sex (which the radical life-style of the Wahhabists develops but doesn’t trigger). When Amar returns from the Wahhabist Summer Camp, Luna seems confused by his sexual behavior that, in its vehemence, contrasts with the sex of the opening sequence. This second sex scene gets linked to a sugar jar – introducing another disruptive image to the coming together of the two lovers – and the voice of Luna’s mother saying “happy sugar festival”, which has a rather funny effect. But while the two first scenes camouflaged violence through illusory tenderness, this third scene turns things around. The violence is no longer kept outside. It is the illusion that is distant now, the sweetness, the sugar feast of their love life being gone.

Jasmila Žbanić subtly portrays a fragile, shattered relationship in which one person, the male, slips more and more into self-denial, and the other, the female, only partially comes to realize that the “you” she would like to have “back” might have never been there from the start. In the end, Luna too, did not see Amar’s disruptive visions, and read something behind the silent, oblivious stare of her friend, that couldn’t live up to her “feast”, a feast that might also stand for an escape threatened to end as abruptly as the opening theme. And while Amar’s split personality is linked to the aftermaths of warfare, Luna’s friend Selja (Nina Violic) has to remind her they also suffered, letting her know, that she too, has her head in the clouds – not because of her job, of course.