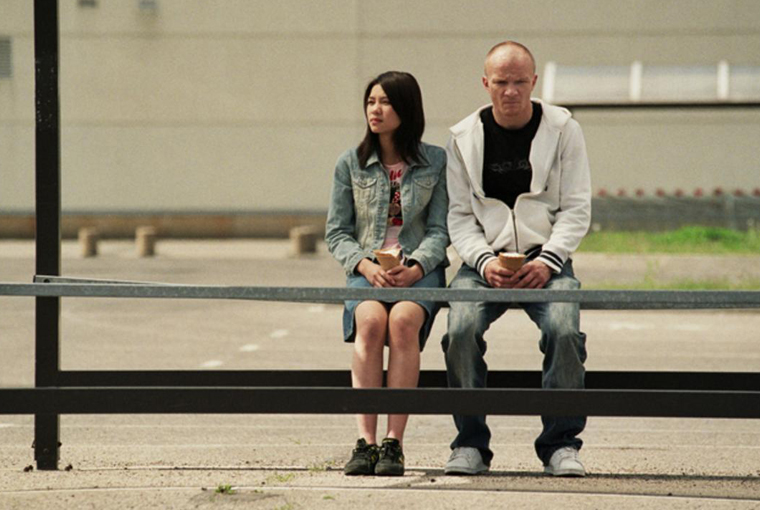 In Marcin Wrona’s My Flesh, My Blood, a man dies. Igor, played by Eryk Lubos, is a boxer, whose lifetime of heavy beatings has left him with irreparable brain damage. Knowing that his days are numbered, he launches a campaign of excessive drinking, partying, and sex. But instead of finding the distraction one might expect, he hardly seems comforted. What Igor needs is love.

Defeated by his nights out, he looks for his ex-girlfriend, who refuses to take him back. He regains hope, however, seeing the children at the school where she works, especially a small boy who is disguised as an angel. He wants to leave a child behind. Thus begins his last fight, against time and a world that anticipated his knock-out and denied him a last strike.

The right person to continue his legacy seems to be Vietnamese minor, Yen Ha (Luu De Ly) who lives in the immigrant suburbs of Warsaw without legal documents. Together, they make a deal: she delivers his child, he grants her Polish citizenship. But what seems at first to be a cold-blooded arrangement soon turns out to give a sense of serenity to the restless boxer. The charming songs of the Vietnamese girl soothe the fighter and echo an emotive sweetening in their relationship. Over time, Yen Ha too, develops feelings for her slightly brusque companion. His child-like competitiveness when playing video-games, his appetite for ice-cream, and his efforts to turn into a credible father appeal to the young woman. By the middle of the film, they seem to have more in common than age, nationality, and sensibility would otherwise suggest.

But as it goes with boxing, so it goes with real life: nothing can be set up in advance. What Igor doesn’t know is that Yen Ha is already in the early stages of a pregnancy that began before they met. Igor, on the other hand, doesn’t tell her of his impending death. When the truth is revealed on both accounts, their relationship breaks apart. But Igor, trying to keep his initial promise, still wants to permit the girl Polish citizenship. He concludes to marry her to a friend, an offer which Yen Ha sorrowfully accepts.

It is hard to understand this rather clumsy gesture. If there was love, why can Igor not accept the girl to assist him during the last moments of his life that the film does not to show? In the end, the film and Igor return to the boxing match, as well as to the defense mechanisms he cultivated in the beginning of the film: drinking and going out. On Yen Ha’s wedding day, Igor, drunk and jealous of his friend, begins a fight. At this moment, his love seems as much a tragic distraction as his alcoholism, and the image of Yen Ha’s tears, as they juxtapose with those of the boxer, seem to lament over the barriers he builds to prevent love in return.

Interestingly, in Clint Eastwood’s Million Dollar Baby, another film about death and boxing, Maggie, whose boxing career left her quadraleptic, asks her trainer to help her die, an offer which he accepts taking her life. But, if we are left to feel that Maggie was not alone dying, it is because we believe that she has been loved, which the final scene of Eastwood’s film dramatically shows. Even though My Flesh, My Blood does not explicitly deal with euthanasia, it does question the good death of its main character. Maggie was able to die because she was loved, whereas Igor, in Wrona’s film, is refused to experience this victory. He tragically fails to develop the courage to ask Yen Ha to love him and accompany his last moments in life. He is abandoned, continuing a fight against an enemy he cannot defeat.