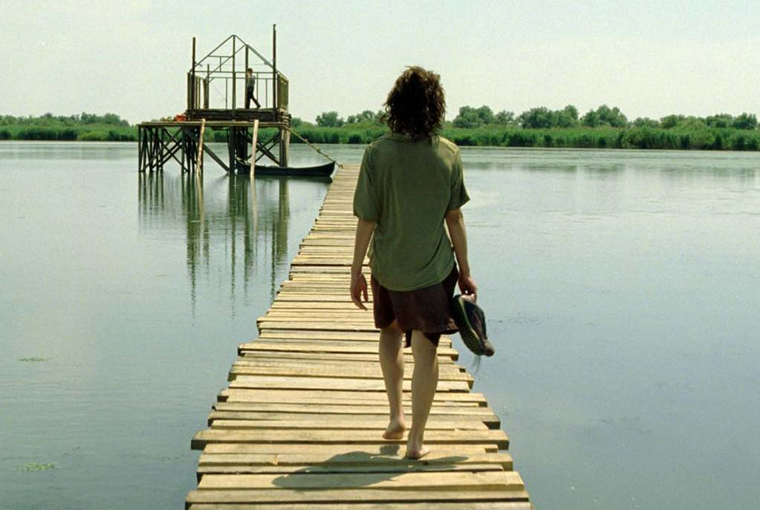 A young man (Felix Lajko) returns to his hometown by a river delta to settle down. In an early scene, the shy man waits at the gate to a family farm and asks for his mother. The man who answers his request later turns out to be the husband of the boy’s mother, but not his biological father, of whom we know nothing. In Tender Son: The Frankenstein Project (2010), in which a young man goes on an incomprehensible killing spree, killing three people, it is also the protagonist who seeks his mother out at the beginning of the film, and it is again the identity of the father which is unclear. Though in the latter film, also by Mundruczo, the protagonist will end up killing his mother, in both films the relationship of mother and son and father and son is essentially beyond our understanding.

Where family relationships of protagonists are often secondary or even unknown, in Mundruczó’s films they play a crucial role that gives insight into his filmmaking approach. To understand what Mundruczo wants to achieve with the ambiguous parental figures, one first needs to know where he is heading. In Delta, it is not a killing spree, but an incest. When the young man returns to his mother, she introduces him to his sister (Orsolya Tóth) who is attracted by his independence, and, first as a sister, but soon as a woman, to him. As he begins building a home for himself, she helps him, and decides to move in together with him. This causes concern among the villagers, who don’t want the incest to happen, but, so it seems, end up causing it. Mother (unsupportive) and father (non-existent), then, are the weak figures unable (or unwilling) to defy the environment, and catalysts for bringing drama into the story: Mundruczo, uninterested in ordinary narratives, seems to have found a convenient way of introducing conflict, as broken families make a meaningful connection to the past that would otherwise need to be constructed step by step.

As the small, new family spends more time together, they grow closer, ever more decidedly defying their environment by being together. “Once, I didn’t eat for a year. I wasn’t hungry,” the sister admits to her brother as they spend their first evening together. Mundruczó’s characters flunk the principles of ordinary conversation so often that one can’t help but reminisce Johanna, an opera film Mundruczo made in 2005. Though the film had flaws of its own (again, the narrative was something of a stretch), a libretto seems that much more appropriate for Mundruczó’s style than the rigidity of dialogue: who complains when characters, during an ordinary duet, switch from ordinary dialogue to thinking out loud, or when a dramatic aria in a bel canto opera is followed by comic relief? The stage, where Mundruczo often returns to, seems to allow for just the kind of raptures that make his films so difficult to believe. Perhaps, this is also a stylistic constraint of cinema which affirms its relative conformity, but clearly Mundruczó’s work fails to convincingly challenge these limits.

As is known, river deltas give rise to fruitful land, though in this case fertility mostly reflects in a disturbing sexual energy. After Toth’s character is raped by her mother’s husband, she’s drawn ever closer to her brother’s comforting hands, finally succumbing to the connection the director has been building up since minute 1. A way of overcoming the rape? A way of consuming the forbidden fruit? Mundruczo doesn’t shy away from symbolism. Of the many dialogues that serve double purposes, many work better metaphorically than on screen (“Don’t tidy up around here,” our protagonist is told when clearing off glasses in the local bar), and the house the siblings are building is never seen finished. Why a house in the first place? There is no place at his mother’s place, we are told, an unlikely narrative for a rural setting where homes are built to house up to four generations. Indeed, the very lyrical Mundruczo could be considered a contemporary Symbolist of some sort, though it is doubtful whether his hostility towards ordinary semantics is replaced by anything but provocative imagery.

Too often, Mundruczó’s characters are reticent youngsters unable to express themselves, forced to usurp their place in society through violent actions. Certainly, there is some psychological truth to this scrupulous overcompensation, but that truth only goes so far. If Mundruczó’s films look at life from a different perspective, as they aspire to, they do so esoterically. In a world where death and sexuality are employed so thoughtlessly, one wonders whether their reason for existence goes beyond inducing an emotional response that character psychology and narratives alone won’t generate. Visual affect, cinema theory’s favorite concept, is provoked here in the most direct, pornographic way. In Mundruczo’s universe, content lags behind form, because it is always the latter which justifies the composition of the former.