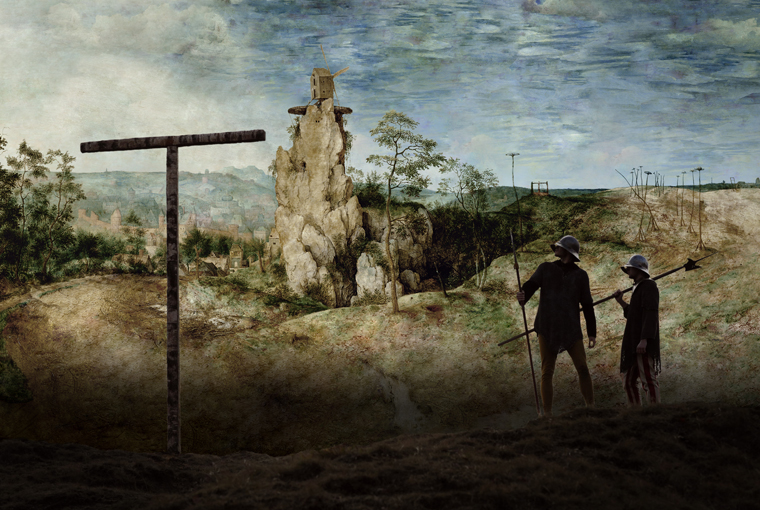 The Mill and the Cross takes place in a painting. Trying to find its way into the logic of a 16th century artwork, Polish director Lech Majewski recreated Brueghel’s Jesus Carrying the Cross perhaps better known as The Way to Calvary by taking the perspective of the painting itself rather than that of the viewer. Majewski’s interest was not only to carefully reconstruct the historical environment and the creative genesis of a masterpiece, above all, he seems to want to expose its poetic significance: “the world is in this painting,” or so we are told by Rutger Hauer in the role of the painter. But if the world is in the painting, it is definitely not in The Mill and the Cross. Majewski’s report from his journey into the world of the Flemish master seems crooked. What happened?

Brueghel’s painting is brutal, after all it depicts Jesus on his way to Golgotha, among a dozen other tormented sinners who the late middle ages knew how to penalize. A filthy business. But most of the images in Majewski’s film recall the sterilized violence computerized films often convey (Lord of the Rings, etc.). Thus dark clouds sweep over a wrecked corpse while it is being devoured by a bunch of peckish ravens. But clouds, ravens and the corpse are too hygienic. Majewski’s film has well understood that beauty is not a question of a blue sky. However, the black clouds it dreams of are ideal: they are made of sugar and are afraid of rain.

One might ask, why make a film about a painting, in a similar way one might ask, why make a film about a book, when the adaptation on screen doesn’t satisfy? There is a very simple answer: most of the adaptations that are convincing, are in reality not adaptations. They are unique versions of poetic minds. They do not try to enter the logic of another artistic universe. Instead, they are able to see the universe through their own eyes. In that sense, Majewski’s aesthetic faux-pas was the choice of its setting. Instead of leaving this world for an indistinct journey into a universe far too, precisely too universal, for anyone to handle, why did he not try to look at the painting from this world? Ironically the strongest part of the film takes place in the museum where the painting is held, which is in this world.

Nonetheless it is not impossible to adapt Brueghel to the screen. In Tarkovsky’s The Mirror, in the famous scene were the bird flies on top of the boy’s head, we are in a winter landscape that recalls Breughel’s Hunters in the Snow. But here, like in convincing adaptations, the fact that we are dealing with an adaptation is entirely irrelevant. Finally, we are not looking at Breughel but at Tarkovsky. This does not mean that we don’t recognize Breughel. It means that what we recognize in Breughel, is the sensation we had looking at a Breughel, or at any truly poetic piece of art, something very complex to describe but something that, anyhow, is unique. This means that it cannot be reproduced. But it is precisely the attempt to reproduce that turns Majewski’s version into an adaptation that is uncomfortably unpoetical, similar to those historically accurate theater performances that still insist on being called mises en scène. 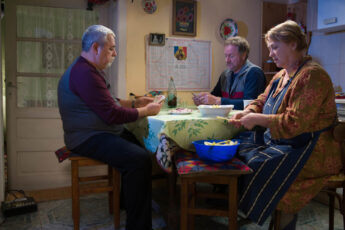