Feeling Good: On and Off 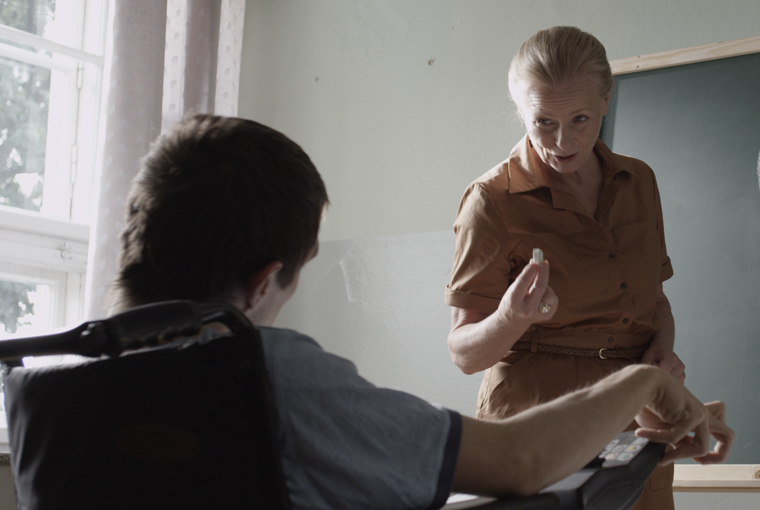 Maciej Pieprzyca’s Life Feels Good is Poland’s first venture into the disability genre. Based on true events, the movie tells the first-person perspective story of a boy suffering from cerebral palsy. Growing up during Poland’s transition in the late 80s and 90s, Mateusz’s (Dawid Ogrodnik) access to a supportive health-care system is pretty much nil. Early on, a health professional tells his mother (Dorota Kolak) that there is no chance for him to develop any complex cognitive capacities (language acquisition, logical reasoning, and so on) and that she is basically dealing with a vegetable.

The caring mother, not easily satisfied with such a hopeless diagnosis, has a different opinion. “He understands me”, she insists, convinced that the emotional relationship with her son is a proof of his intelligence. She consults other doctors but all of them share the same opinion. In one scene, some kind of voodoo medic even comes to the conclusion that Mateusz’s case is impossible. The faith healer refuses the mother’s payment, instead continuing to murmur remedial spells over the boy’s body. But this scene may reveal more about the credibility of the official medics, since both come to the same conclusions.

For the next 15 years or so, until Mateusz turns 26, the question of whether he understands remains a mystery for his family whose relentless love and care nevertheless seems to indicate that they never had a doubt. Since Mateusz narrates his own story in voice-overs, the audience knows from the start that he can understand and eventually communicate. This is kind of confusing because it is obvious that Mateusz later communicates via blissymbols, which use images to enable people to communicate without speech.

Overall, Maciej Pieprzyca’s film may be a little too straightforward to count as an uplifter, and a little too heartening to be considered sociorealist militancy. Every time the story drifts into buoyant sentimentalism about the fact that being disabled does not mean that life can’t be fun, the film invents a more dreadful scene whose only purpose seems to serve the proof that life is, all things considered, not all-good.

For instance, Mateusz is obsessed with breasts. Tits keep him going. He invents a scale of one to ten in which he evaluates different female torsos which he has the opportunity to peak at rather often because his different-sex counterparts are forced to lean over when they want to interact with him. This complex rating system is not only funny and shows his familiarity with cognitive systemizing, but also brings quite a lot of joy to the sex-deprived Mateusz, especially when a beautiful blonde nurse (Katarzyna Zawadzka) allows him to squeeze her jugs. But then, the nurse turns out not to be that friendly a couple of minutes later, when she uses her relationship with Mateusz for her own neurotic needs. She brings him to her father’s formal birthday dinner for the sole purpose of annoying him and his bourgeois company.

This recipe of switching narrative moods seems to be particularly popular in contemporary Polish cinema. One director who uses this technique consistently is Małgorzata Szumowska. When it works, it complexifies standard dramaturgy and helps to avoid clichés. The idea is to make a story more accurate, genuine, and true by including elements which stop the mood from becoming prejudiced. Bad comedies are bad because they are one-sided. They give the spectator the feeling that life is not that awesome, hilarious or great. Good comedies are often also rather sad. But this technique of switching narrative moods can quickly become over-conceptual when the different side narratives turn out to be less part of the plot than kind of additive meta-commentaries. The above-mentioned scene with the nurse’s father doesn’t seem to have any other purpose than to lecture the audience that it shouldn’t be too happy for Mateusz to have just touched the nurse’s breasts. Paradoxically, such additive commentary makes this film rather fake. Is the happy-sad dichotomy not already present enough in Mateusz’s life as it is?