When Your Day is Coming to an End, I’ll be Your Dream

Bodo Kox’s The Girl From the Wardrobe (Dziewczyna z szafy, 2013) 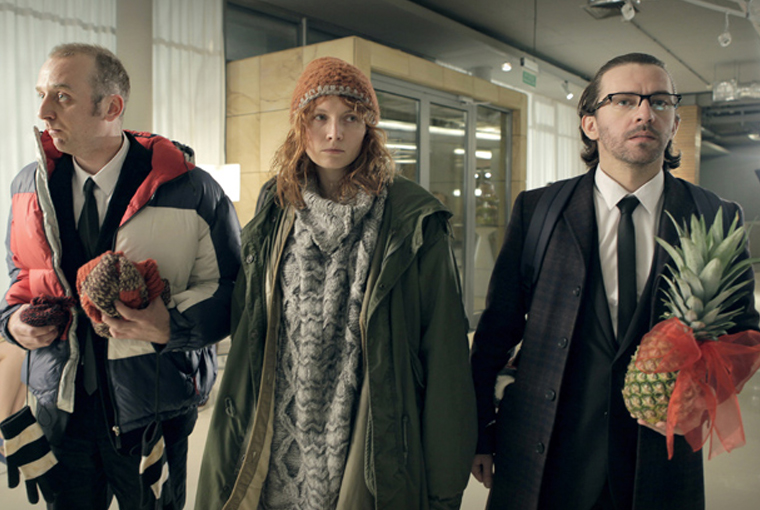 The Girl From the Wardrobe is a wonderfully dry exercise in comedic Polish independent filmmaking. The dark comedy employed in the film varies from the imaginary (Tomek has a tendency to literally tune in and out of his mental radio station) to the literal (at one point Jacek romances his new date in a room filled with a miniature toy collection). Magda is introduced by ignoring the advances of a foolhardy groundsman who guards the estate and instead places a white rabbit outside her door when he leaves. The colorful trio of Jacek, Magda and Tomek brighten the mundane, grey world they reside in. However flawed they are, be it disabled, addict or suicidal, these sad, lonely people are in perfect keeping with the bleak but ultimately hopeful ideology of the film. In a sense, both poetic and to some extent floral, the film focuses on their relationship in a sincere (but not dramatic) way, with moments of oddball beauty (blimps floating majestically above the high-rises) and absurdism (Magda, under the influence of hallucinogens, perceives a policeman as a Nazi and a sheriff from the Old West). The director Bodo Kox’s vision is akin to the surreal realities of Michel Gondry, blurring consciousnesses of real-life and imagined fiction. Even the aesthetic of the film is glossed over with a dreamy, hazy colour scheme. The hypnotic cinematography also mimics Wes Anderson’s signature sweeping pans and tracking shots in which the mobility of the camera movements and compartmentalized framing of shots resembles a similar image to that of a dissected doll’s house.

The soundtrack – a sombre mixture of new wave pop and ambient “shoegazing” genres – lends an added sense of modernity to the film, a present day-ness that prevents the diegesis from developing into an almost dystopian not-too-distant-future. Similarly, the dialogue at times can become worryingly philosophic or overtly anthropological. Yet, because the grandiose statements are often undermined by a subsequent, silly observation, the film does a successful job of restraining such issues of life, love and death to a domestic scale. As a result, the characters are accessible, realistic and – well – alternative.

Tomek is brilliantly portrayed by Wojciech Mecwaldowski. As Jacek’s brother who suffers from an intense case of autism, Tomek has the ability to be cute, sympathetic and unpredictable. He is overprotective and possessive of Jacek, culminating in a violent outburst that sees him physically attack Jacek’s girlfriend. But he is also incredibly childlike, innocently rocking back and forth or pacing to and fro when he’s not intensely staring, wide-eyed and unblinking at people across the dinner table, playing the awkward third wheel. Mecwaldwoski’s impeccable comic timing warrants acclaim too. The punctual delivery of his one-word dialogues with strangers provides an entertaining catharsis that counteracts all his encounters with ignorant, prejudiced characters. With this in mind, Tomek and Jacek’s relationship owes itself to the brotherly chemistry shared by Dustin Hoffman and Tom Cruise in Rain Man. It is by no means derivative but the formula of misunderstood, disabled individual and their hedonistic, younger kin has become a convention of contemporary American cinema.

During a sequence set in an art gallery exhibition, the camera scrolls past the diverse range of misfits, pompous critics and socialites, as if wafting away their ridiculous, pseudo-intellectual remarks and witty commentary. The shot eventually settles on Jacek, Magda and Tomek lingering in the crowd of the art world, out of place, unfamiliar and clearly uncomfortable. Jacek brings a pineapple as a gift. Magda immediately makes her way to the bar, drinking red wine straight from the bottle and spitting on the pretentious works hanging on the walls. Tomek is the only reasonably behaved guest. He wanders off and – finding a white grand piano – effortlessly begins to play an elegant and moving piece of music, before abruptly fainting and falling off his chair. This gesture, that combines both the high (classical music) and low (slapstick comedy) brow, intentionally levels the class divide that keep individuals so isolated from one another as a result of cultural tastes and social expectations. The universal enjoyment of the disabled musician/comedian felt by the gallery guests is mirrored in the coupling of high and low brow pleasure the audience experiences as well.

In the final act of the film, Jacek receives some tragic news regarding his brother. The conversation with a rather unsympathetic and blasé doctor reveals that Tomek has been diagnosed with some sort of terminal illness. Kept in the hospital for the foreseeable future, Tomek returns home, escaping his confines in the guise of a surgeon by stealing the iconic white lab coat and stethoscope. He walks (assumedly for miles) all the way back to his brother’s apartment. This spark of genius or relapse in autism has a very humanizing effect on the viewer in the way we regard Tomek. In this instance, he is aware of his surroundings and is willing to actively interact and negotiate himself through the environment in order to flee. The walls of his own autistic world are momentarily torn out as he feels the need to be with the ones he loves at the cost of bursting his comfortable safety bubble. The heartbreaking futility of Tomek’s future is realized when his brother attempts to euthanize him through strangulation, after witnessing the pain and suffering Tomek will endure to the very end of his life. But the ending of the film, with its cyclical narrative style, still provides satisfying closure for the spectator. Standing triumphantly on top of the estate building, Tomek and Magda stand defiantly hand in hand, looking together into the abyss over all the people and things below them.

The premise, that love can be found in the most unlikely places and the most unlikely of forms, is visually manifested in the very beginning of The Girl From the Wardrobe. The opening credit sequence follows the camera’s descent through the sun-kissed clouds in the sky, as if to position the audience with their head in the clouds, allowing the story that unfolds to seem all the more true. The love story, which is essentially the bond between two extraordinary weirdos living next door to each other, challenges the viewer’s notion of normalcy. Tomek and Magda share an intimate, introvert and hallucinatory universe. They both take mind-altering medication or drugs, a flaw which connects them psychologically. Their unique complications are precisely why they belong together, as a couple who don’t belong anywhere else. Their scenes are persistently juxtaposed with Jacek’s one-night stands that are wholly physical-attractive, devoid of any emotional or intellective connection. In one memorable sequence, soon after Jacek brings his girlfriend to orgasm, she has a childish tantrum and refuses to touch him, leaving him bewildered as he zips up his flies. After Tomek has declared his love interest in Magda by painting an elaborate portrait on his bedroom wall, he is eventually framed within her own personal “happy place”. The exotic jungle forest she pictures is a space of tranquility and contentment for Tomek, who has to be literally carried away from by his brother. Spying on the neighbors across the street, Tomek and Magda seem no less crazy than the idiotic, angry man they spot shaking with fury, or Jacek, or anyone for that matter. 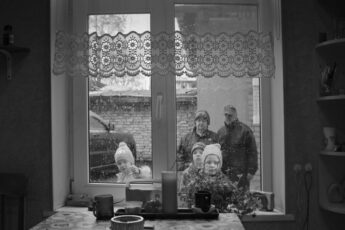