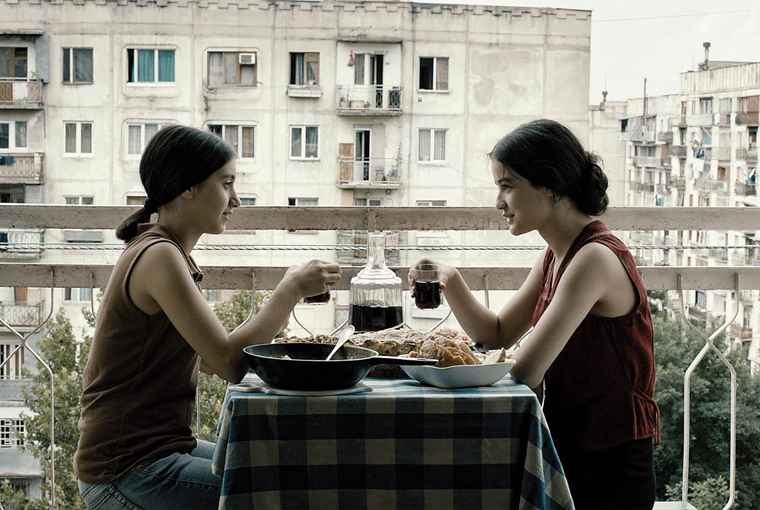 In 1992, during the Abkhaz-Georgian war, two young friends struggle to deal with everyday life. As Georgia, a former Soviet republic, cherishes its newly gained independence, economic hardship and violence overshadow the hope for positive change. To Eka and Natia, it is their immediate environment that is truly challenging: shameless bullies, heartless teachers, and uncomprehending family members. Often but not always, Eka and Natia are able to defy the claws of an oppressive patriarchal society – a conflict that is captured in the father figure, which is entirely missing in Eka’s case, and “deserves to die” in Natia’s eyes. But to 14-year-olds, men can be of interest, and so it is often the very people Eka and Natia feel drawn to that end up exploiting their naïve benevolence.

The film’s proposition is fairly conventional and, accordingly, easy to grasp. In a war-torn country dominated by violence, hostility and economic hardship, growing up is a challenge in its own. Since we identify strongly with our likeable protagonists, this in itself doesn’t pose as great of a danger to the film as its disinclination to grab on to a dramatic structure. As scenes keep repeating (I stopped counting the times that Eka and Natia are abused by parents and elders upon entering the flat), one starts wondering whether Ekvtimishvili and Groß will opt for an open ending when Natia is suddenly kidnapped by a disagreeable man and, a few scenes later, marries him. Though this conflict, too, is somewhat predictable, it is genuine, touching and, as most of the film, well-acted out. Lika Babluani and Mariam Bokeria, the principal duo, give marvelous performances, reason enough to watch this film a second time.

But where Ekvtimishvili’s and Groß’ directorial skills are highly praiseworthy, their style gives rise to suspicion. There is the distinct visuals with interior wide-angle shots and little space on screen, two women in the lead roles, an explicit political context (which, as I explain below, is highly problematic), the dramatic tardiness, dry humor, and, at the center, an oppressive society which seems to leave people (represented by our protagonists) little choice but to adopt its sick ways. Doesn’t ring a bell? I’m speaking of the Romanian New Wave (or, if you prefer, New Romanian Cinema), and, more concretely, Cristian Mungiu. As we have discussed in this journal, it is easy to overrate the parallels between 4 Months, 3 Weeks and 2 Days and Beyond the Hills, but visually, thematically and politically speaking, these films do meet on common ground. Since Ekvtimishvili and Groß chose Oleg Mutu (Cristian Mungiu’s director of photography for both films) to be their cinematographer (for good reasons, it seems), a similar approach translated into a quasi-identical directorial trademark. That the popularity of Romanian cinema could have such negative side effects I didn’t foresee. But while the two directors of In Bloom are well-advised to look for a different style than that of Mungiu (if you don’t care to be accused of plagiarism, do it for the sake of Romanian cinema!), a closer look at the political and historical level of In Bloom offered below illustrates why in this case, the quality of the copy does not match that of the original. Finally, if Mungiu’s films alone aren’t sufficient to convince you of the political literacy of Romanian cinema, we invite you to consult our archive for an attempt to prove it.

Though it may take some time to understand why, the most problematic feature of In Bloom remains its historical dimension. In a familiarly optimistic tone, the Berlinale 2013 catalog announces that a “new generation of filmmakers has emerged in Georgia” which “is starting out by remembering its own history,” a sentence which summarizes perfectly what the Western festival circuit expects from culturally ‘exotic’ films: a readiness to come to terms with the past. But it is worth asking in what way In Bloom deals with history, then.

The year the film is set in is 1992, one year after Zviad Gamsakhurdia, a former dissident who held a short presidency from May 1991 to January 1992, declared independence from the Soviet Union. The war between Georgia and its separatist region Abkhazia would only begin in August of 1992, while the reasons for the conflict – typically for the Caucasus – are much disputed. In 1989, still, Abkhazians (unlike Georgians) were not interested in a quick separation from the Soviet Union, and were instead asking to be given the status of a Soviet republic through a public forum. The forum, organized in Lykhny, Abkhazia, provoked a wave of counter actions from Georgian nationalists: rallies and demonstrations were held, denouncing both Abkhazia’s separatist aspirations and Moscow’s backing of the movement. To Gamsakhurdia, a prominent figure in this Georgian counter-movement, territorial integrity was a priority. When South Ossetia, another region which strove to break free from Georgia in the aftermath of 1989, declared its independence from Georgia in 1990, the new Georgian parliament (headed by Gamsakhurdia) rejected the decision and declared a state of emergency in the region. Fighting broke out, and the local South Ossetian representative was arrested as he traveled to Tbilisi, Georgia’s capital. When the 1992 war began, Gamsakhurdia had already been replaced by Eduard Shevardnadze (a member of the old elite who had served as foreign minister to the Soviet Union). Still, nationalism loomed large in Georgia. Para-military groups and militias had formed, and Georgia – especially the separatist regions, where the atrocities of the armed groups were most visible – started drifting into civil war. The war with Abkhazia began as the Georgian National Guard marched into Abkhazia. The official version given by the head of the Guard, Tengiz Kitovani, was that this operation was a mission to free Georgian officials held in the South of Abkhazia, but the soldiers moved to Sukhumi, Abkhazia’s capital, instead, seizing public buildings and looting. Abkhazia’s parliament was dissolved by the Georgians, and though Shevardnadze’s involvement in the operation has never been fully clarified, he failed to condemn the actions taken by Kitovani until late after the conflict.

This picture – which is, of course, no more than a sketch of a conflict that has social, political, cultural, ethnic, and historical dimensions – is by all means challenging. And where even scholars of the region must admit that any account given is devoid of some relevant aspects, a film, where in parallel characters and narratives must be developed, gives little space to detailed studies. But a director who accepts the challenge of addressing such a delicate and intricate topic must also face criticism if he is unable to meet it.

Undoubtedly, the strength of Ekvtimishvili and Groß lies in their reconstruction of Georgian reality: their film is vivid and atmospheric, able to communicate both the material (locations, characters, colors) and non-material (behavior, values, opinions) facade of Georgian society. The image of Tbilissi is personal and authentic at once, a magic combination made possible by Mutu’s tremendous talent and the fact that Georgia’s capital – in spite of the many adventurous modernistic creations that have appeared recently – hasn’t changed substantially in the past decade. But meanwhile, the viewer is left in the dark about this war that is taking place somewhere in the background. Yes, there are the radio announcements and conversations that keep revolving around this one topic, but who is fighting the war and why it is fought, Ekvtimishvili and Groß do not tell us. The only scene that comes close to a political comment takes place in school, when a classmate of Natia and Eka comes late to school and the grossly unfriendly teacher asks her to explain herself. The young girl – visibly fearful of the the sinister school teacher -, tells her that her father had come home for a visit from Abkhazia, to which the teacher retorts that only crooks and criminals fight in this war (a reference to the criminal gangs participating in the fightings). The girl, with whom we strongly sympathize, says that this is not true.

Indeed, there were many people who were drawn into this conflict by the National Guard who had no intention of killing and were alienated by the war (there are some lyrical films which focus on this alienation, for instance Giorgi Khaindrava’s Cemetery of Dreams). But whether we need to be reminded of the innocence of individuals is questionable. During all three presidencies that Georgia has had since gaining independence after 1989, there were military conflicts with its separatist regions that were partially (if not largely) caused by Georgia’s readiness to follow its nationalist intuitions. The latest one, in 2008, had widespread backing in spite of the fading popularity of president Mikheil Saakashvili, who last drew the country into war (perhaps, the fact that Putin’s Russia reaffirmed its illegitimacy by responding with a large-scale invasion of Georgian territory hindered a nation-wide discussion on the right sort of topics). This is also why In Bloom is so dangerous: Ekvtimishvili and Groß give us the impression that we are traveling to the past and that we are dealing with a past era in Georgia’s history, when really the country is just as much caught up in nationalism as it was when the 1992 war happened. But the film doesn’t speak about nationalism. It speaks about the fact that violence is bad, without trying to inquire why violence in the region is so immanent. The two directors travel to the past, but they don’t bother to take the tools with them necessary to assess this past.

In Bloom is, in a strikingly literal way, really just a “remembering” of the past. Memory, however, is not an action with an intrinsic connotation: remembering can be positive (for instance if we remember past atrocities to raise awareness), but it can also be dangerous (if we remember those same atrocities to legitimize them). This film may speak about the right topics, but it fails to address them critically. The fact that reviewers failed to point this out may be due to a lack of historical knowledge (Georgia, after all, really is ‘exotic’), but may also result from the false and hypocritical consensus that cultural foreigners are in some way unfit to critique such delicate topics. It is wrong because any informed viewer – whether native or not – can apply universal moral standards that are valid from San Francisco to Tokyo, and hypocritical because we make such judgements on a daily basis, for instance by selecting films that (seem to) represent a very particular political and social agenda at the Berlinale.