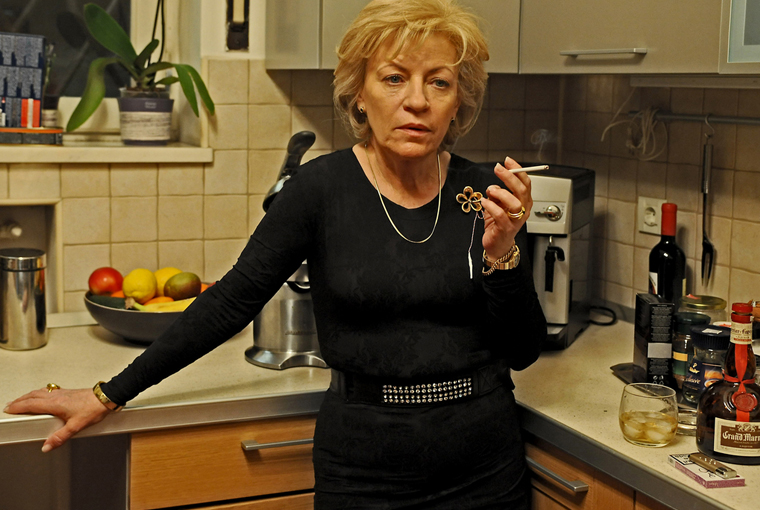 The new film directed by Calin Peter Netzer is the product of a collaboration between several influential names in Romanian cinema. Razvan Radulescu co-wrote the script along with the director. Romanian actor Bogdan Dumitrache interprets a central role of Barbu. And then there is the person everyone will be talking about: Romanian actress Luminiţa Gheorghiu in the role of Cornelia, the obsessive mother who can’t let go of her grown-up son Barbu.

The story focuses on the relationship between a mother and a son. When Cornelia, a married woman in her sixties, finds out that her 32 year old son has killed a teenaged boy in a car accident, she immediately rushes to the police station. On arrival, Cornelia presents herself to the police and the people standing around the accident site saying: “I am the mother of the child.” Among those present are the family of the young boy who has just been run over… But this “Freudian slip” — her “child” is, after all, 32 — sets the tone of the film. For Cornelia, her son, the wayward and cowardly speed-driver who can’t take responsibility for his actions, is still her innocent baby who would never hurt anyone.

Another popular Freudian meme comes to light in the film. When her son stays at her house, Cornelia massages his beaten shoulders, slipping into his room late at night with a bottle of massage oil. This could be interpreted as a normal event, a mother caring for her son’s wounds. But something about the way the camera lingers on her exposed cleavage and her thighs astride his body, makes us wonder about the situation… This inverted Oedipus complex, a woman’s need to be appreciated by her son, is not often discussed with such respect and enlightenment. She wants to be both loved and desired, as do most people. Cornelia is shown to be obsessed by the kind of desire that doesn’t ask for consummation.

Barbu’s girlfriend has to deal with Cornelia bolting the door of their shared apartment while she examines every detail of things in their drawers. Meanwhile, the girlfriend stands just outside the door pleading to be let in. The mother-in-law conundrum is famously frustrating for women, and one that this film highlights and explores with delicacy.

Calin Peter Netzer is used to working with actors in their advanced years. In his last film, Medal of Honour (Medalia de onoare, 2009), 79 year old actor Victor Rebenguic played the main character. When asked during an interview about working with older actors, Netzer quipped that it is easier than with younger ones. His work certainly seems to bring out a spark in these professional actors. An attractive older woman who oozes sophistication, Cornelia is used to getting attention from men. She wears red and gold, has perfect fingernails and jewelery, and her cell phone rings to the tune of Bach’s Cello Suite No. 1. The opening scenes feature her birthday party. She is surrounded by many people and she dances with abandon. The only person who doesn’t turn up is her son.

In one scene Cornelia interrogates the house-keeper who is employed by both mother and son. She wants to find out if he is reading the books she gave him by Herta Muller or Orhan Pamuk for his birthday. Are they open by his bed? The poor housekeeper, unsure how to respond, mumbles compliant responses, for which she is rewarded with an expensive pair of shoes. Here, as later on, it is Cornelia’s wealth that enables her to keep up to date with her son’s life. Like a rejected lover, she clings steadfastly to the strings that used to tie their lives together.

Set in 2012, the film brings to light the corruption that still abounds in this struggling country. Police accept bribes: both monetary and by way of favors. Cornelia pulls all the strings she can reach, and these connections go far. It is near the end of the film, as a last resort, that Cornelia gives up the lost cause of trying to buy back her son and goes to visit the family of the deceased boy. She commiserates with the mother but in an insensitive way, telling her “you have another child, I only have one, please don’t take him from me.” Somehow the argument works and the silence is broken. This is the story of a double loss; two mothers who have lost their son in different ways. In their loss, differences, even those of class, are transcended.

Cornelia is the Italian mamma par excellence, wishing for grandchildren but never expecting her child to fully assume the responsibilities of fatherhood. As the credits roll, the Italian song Meravigliosa Creatura by Gianna Nannini plays again, a recurring theme throughout the film. But who is this ‘marvelous creature’ that the song speaks of ? For Cornelia it is no doubt her son, who she describes wistfully as having a “beautiful body”. For the viewer, it is left to the imagination, although for many of us it is probably the tactless, vivacious and beautiful Cornelia.