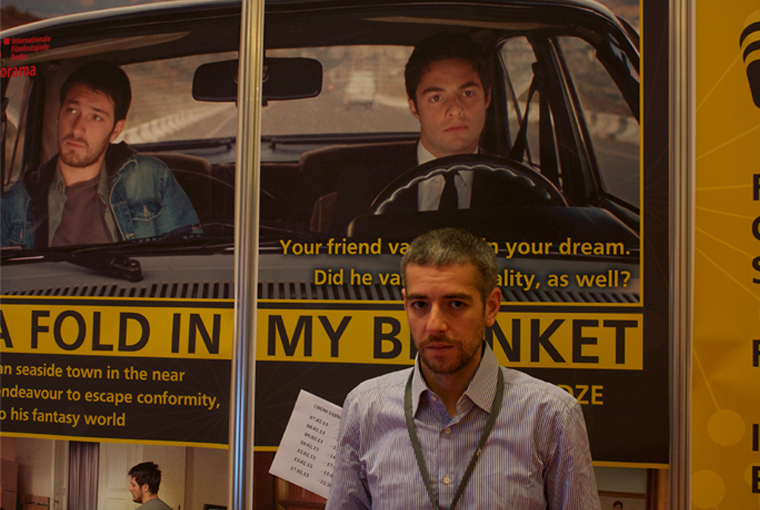 We met Zaza Rusadze at the Berlinale, where his film opened the Panorama section of the festival. The Georgian director speaks about the direction of Georgian cinema, its tradition, and the lack of critical culture in his home country.

At the screening of your film, you said that you wanted to make your first film in Georgia. Why is that?

It was a decision based on my belief that every artist and filmmaker should work within the context of his own culture and with the material which is close to him. Regardless of the fact that I left Georgia to study in Germany, the world I grew up in, the one that I am preoccupied with, and the one that inspires me is still Georgia.

Is “A Fold in My Blanket” a film for a Georgian audience?

I never thought it would be a film for Georgia – in fact, I never had a particular audience in mind. Even though the story is set in Georgia, I think it has a universal appeal. In a way, the fact that we opened the Panorama section of the Berlinale supports this view. I went to one of the last screenings of my film yesterday and I couldn’t help but stay in the hall and see how the audience reacts. It was a great screening. People laughed – not carefully, but genuinely. I was very happy about these reactions which confirmed to me that the film is able to cross cultural boundaries.

What role does cinema play in a country like Georgia? Do you think that there is a “new generation” of filmmakers emerging?

There were few films produced in Georgia before, and now this picture is changing. Young and upcoming directors are hopeful of the new opprotunities created by the Georgian National Film Center. It may be too early to speak of a Georgian New Wave, but I’m pretty sure that in a few years we will look back at this year and remember it as a new start. I think art has a huge responsibility to address the important topics Georgian society is facing, but fails to deal with – to change, if not initiate a discourse around social and political issues. I am happy that German reviewers, who I’m very fond of, recognized that Georgian directors are ready to deal with post-Soviet traumas.

Do you think Georgian directors are “hard enough” on Georgia? Issues like nationalism or homophobia aren’t truly addressed. It seems that the picture of Georgia one gets from festival films is that of a very open and critical society ready to deal with its past.

I don’t agree Georgia is idealised in new Georgian cinema. Certainly, there were films which used cinema as a quasi-propagandistic tool to show what a beautiful and modern country Georgia is, but I don’t think that the young generation of Georgian filmmakers has the same approach. We have a more radical one, not just by criticizing, but also by igniting discussions. Leven Koguashvili’s recent Street Days for instance dealt with very important issues: a lost generation, the collapse of the Soviet Union, the civil war and economic hardship, factors which triggered widespread drug addiction (which is luckily decreasing now). Although our films are quite different in nature, I think that In Bloom [dir. Nana Ekvtimishvili, Simon Groß] or my film are similarly hard on Georgia.

In your film, what is Dimitrij trying to escape? Is there a connection to something in real-life Georgia?

One of the main themes of the film is the question whether the boundaries between reality and phantasy can be blurred in such a way that at some point you cannot distinguish between the two anymore. Having lived in Germany for many years and having returned to Germany, the question of escape became important to me. The changes happening in the post-Soviet space are so big and so intense that you get the feeling that as your day starts, you’re not really given the chance to reconnect with the world. Georgia is changing, but it’s still struggling to deal with its identity and issues like homophobia. If I had to deal with these problems on a daily basis, that would impede my freedom so greatly I decided that rather than fighting it, I want to create a space where I can tackle it. In the film, this leads to this sad notion of escape, a complete retreat to fantasy which is strongly associated with nature.

I am quite cynical of trying to rebell every time we are unhappy with a situation. I find this creation of an alternative space to be a more efficient approach. Slavoj Žižek said this: art should start creating utopian ideas, that should be the function of art. I identify with a more conceptual undertanding of art. If we just show how difficult life is in our countries, this is reporting. Art should go a little further than that, whether it is through escape or by presenting a new model for the future. My personal approach is that by distancing ourselves from reality, we can reach out to it. We are so tangled up with this notion of reality presented to us by TV that freeing ourselves from it is almost like a philosophical method.

Are you inspired by the Georgian 60s movement? Though for quite different reasons, they, too, often used a phantastic language after all.

Of course I am very influenced by these wonderful films and directors I grew up with. I feel very much in contact with their magical realism and a metaphorical and poetic way of expression. I know that some of my colleagues will have a different opinion and desire a more radical break with the tradition, but I feel like this is something Georgian cinema shouldn’t loose. When art gets into a crisis situation – and surely we were facing one -, it needs a historic reference point. Think of the Renaissance, that’s how it emerged.

In Georgia, we are accused of neglecting our national identity, but in the West, festival audiences and critics seem to acknowledge the continuity of Georgian cinema. I enjoy being in dialog with the older generation of filmmakers. I worked with Otar Iosseliani and Dito Tsintsadze, and the experiences were very enriching both personally and professionally. It is important to me that the memories of these generations get transported to me.

Did you have a chance to show the film in Georgia yet?

No, and actually that was a conscious decision. Technically, we weren’t done with the film until shortly before the Berlinale, but you can always make a screening with a cut that hasn’t been finetuned. Everyone was pushing me to show it and of course I can understand them – especially the crew and actors who worked on it. But I wanted to have the world premiere here at the Berlinale, and I’m extremely happy that it worked out. It’s a space with a great tradition of criticism, and I’m glad the critical discourse is starting here, not in Gerogia. Evidently, I’m looking forward to the screenings in Georgia, but I’m also afaid it will trigger some pointless discussions.

Someone – a film student in Georgia – reposted the trailer of this film and wrote how it was mystical when the country was collapsing. “Who needs this film?,” he wrote. I wasn’t sure whether I should engage in a discussion with a person who criticized my film without having seen it. You can criticize anything, but I am just missing the right sort of criticism in Georgia. In the end, I did contact this guy (although I hadn’t known him before) and we had a great discussion even though we disagreed.

Dito Tsintsadse, a colleague of mine who I respect greatly, wrote to me after the screening in a worried tone that he wanted to let me know prior to anyone else that he didn’t like my film. Tomorrow, Dito and I will have an interview on a Georgian radio station, and I asked the interviewer not to give Dito the chance to be indirect or soft on the film, because that is what we really lack in Georgia. My relationship towards my film is not going to change because of critics, my happiness to be working on it and to see it premiere in front of an international audience won’t be spoiled by reviews or personal opinions. My relationship with my film is like that of a parent and his child: I will love it even if it’s one-eyed or one-legged. This careful attempt of not criticizing each other’s work is bogus, and film critics in Georgia also need to catch up. When they observe a “falseness in dialogues,” they should also speak about their measuring tools to figure out whether the dialogue is really false. But this lazy and unargumentative criticism is something we should really give up.