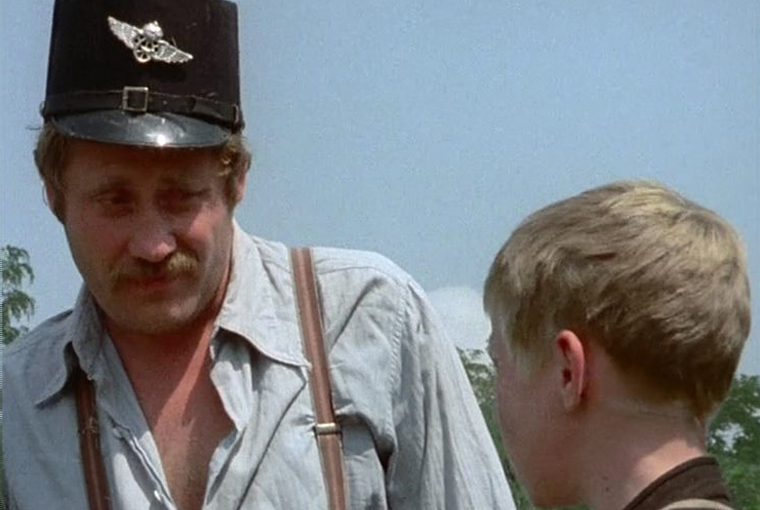 Sándor Mihályfy’s film Indul a bakterház is a 1980 adaption of a children’s novel by Rideg Sándor first published in 1943, although part of the story was published in a magazine earlier. The novel, like the film, takes place in the early twentieth century in rural Hungary. It tells the adventurous story of a clever blond farmer’s boy called Bendegúz. In the beginning of the film, Bendegúz is sold to another farmer by his mother, who probably needs the money but also doesn’t seem all too sad for getting rid of her son. The boy is a troublemaker who enjoys playing tricks on other people. Most of his victims are much worse than him though. The farmer that bought him, for example, is a mean drunkard that wants to teach the boy a lesson and exploit him for work. As a result, we are also more happy than sad when he leaves the farmer behind, pretending to find him a knife.

Similar to other boys whose main purpose is to get into trouble, like Mark Twain’s Huckleberry Finn or Astrid Lindgren’s Emil Svensson, Bendegúz is not intentionally malicious. He just reacts to the injustice done to him. Later, Bendegúz is able to run away from the farmer and is hired by a railroad watchman who wants him to take care of his two cows. But he lies to the boy about pay, and the mother of his deceased wife turns out to overload the boy with hard labor. Bendegúz thus takes revenge, learning that humor and bluff are the most adequate tools out of his miserable situation. In the end, the bad experiences he has help him refine his morality. Still being a child, he sees the world like a fairy tale, where the farmer is a “devil”, the stationmaster’s mother-in-law a witch, and where Bendegúz later fools the stationmaster in seeing the ghost of his late wife. But this imagining of reality as fiction is also a means to master reality. Turning his environment into a story is the only way for Bendegúz to write his own destiny.

Sometimes, however, the boy gives the impression of being the mouthpiece of a grown-up who wanted to travel back in time to make a case for the injustice that is done against children. Although certainly childish in some respect, Bendegúz appears too mature in others. In one scene, for example, he justifies using the informal “you” to talk to the “witch” saying that he is an advocate of “equality.” In another scene, the boy elaborately reflects on how to politically forbid the beating of children. This witty talk is definitely funny. It also has quite a lot of justified pathos, and makes us sure about what side is bad and what is good. But it itself seems more like a fairy tale. In a way, Sándor Mihályfy paradoxically tries to save his hero from the corrupted world he is born into by making him more grown up than the grown ups he encounters.

This irony is of course part of the story’s moral. An essential part of Indul a bakterház is, I believe, to remind us that grown ups are extremely childish. They just have the words and the rationality to pretend that this is not so. This makes them especially cruel towards children, who may have a less corrupted sense of moral judgment, but neither the rhetorics nor the authority to defend it. Giving children these grown up qualities may be completely fantastical, but it has a redeeming effect. How often do we, even as grown ups, replay certain scenes of our lives where we could have defended ourselves but didn’t? For most of us, morality remains an activity that we experience in our heads, like children or characters in a play.