Following his The Dead Nation, Radu Jude’s latest feature I Do Not Care If We Go Down in History as Barbarians explores Romania’s complicity in the destruction of European Jews. The essayistic film can certainly be considered Jude’s most ambitious project to date and arguably also stands out, both in intellectual scope and aesthetic complexity, against the plethora of recent pics dealing with the topic of historical trauma and negationism, such as Joshua Oppenheimer’s The Act of Killing (2012) or Pawel Pawlikowski’s Ida (2013), and should justly draw comparisons to such classics as Alain Resnais’ Hiroshima mon amour (1959).

At the center of Jude’s film is a young artist called Mariana (Ioana Iacob) who is preparing a performance in a public square in front of the Carol I Library in Bucharest. The “reenactment” is fact-based on the 1941 Odessa massacre, in which tens of thousands of Jews were killed in the course of three days under the direct order of Romanian prime minister Ion Antonescu. The title of the film refers to a speech given by Antonescu in the Council of Ministers a couple of months before the massacre.

Throughout most of the film, Mariana is researching and rehearsing for her performance, a process that turns into a political feat, as she constantly has to confront the opinions of blatant and latent negationists. These include about half of her amateur cast, the state official Movila (Alexandru Dabija) in charge of funding the show, and Mariana’s lover, pilot Stefan (Serban Pavlu). The confrontations reveal the widespread ignorance most Romanians have about the more atrocious details of their country’s past, as well as the dominant narrative, pervasive in Central and Eastern Europe, which continues to frame the societies of Europe’s collaborationist nation-states as victims. And so Jude empowers his heroine with the knowledge, rhetoric and patience to deconstruct each and every conceivable argument that could possibly be brought up against historical truth and the urgency to remember it.

Some of these theoretically and historically informed dialogs would not be easy to follow – even for the savvy -, but Ioana Iacob magically makes her maieutics feel natural, authentic, and surprisingly entertaining. She is a wonder woman of words, knocking out complacent know-it-alls and their chauvinist, nationalist, racist and relativizing discourses with eloquent punch-lines that are drawn from a well-curated historico-philosophical repertoire. Thus Mariana’s enlightened rage is not limited to meta-historical debates about the representation of the Holocaust, but frequently extends into drama theory and even theoretical linguistics. As a matter of fact, Jude’s film is as much about a female artist trying to unfold her artistic vision as it is about memory and the performance of extreme acts of violence.

Radu Jude uses every meta-narrative available to circumvent the anathema of direct representation that has accompanied artistic reenactments of the Holocaust at least since Resnais’ Night and Fog (1956). Not only is there the play-within-a-play, which allows for the meta-historical questions of how and why to represent history, but the actress introduces herself as the character of a movie during the film’s opening shots, adding an additional meta-narrative to the film. Then there are scenes showing archival footage (or the lack thereof), which introduce the viewer to the inscribed forgetfulness that accompanies most genocides and symbolically points to the difficulties to mourn without material traces of the dead. While most directors would already be overwhelmed keeping these two historiographic moments alive – the representational and the psychological -, Jude introduces a third narrative strain, in which the political and economic emergence of the representation are questioned: in short, who benefits?

It is the answer to these questions that sets Jude apart from the didactic optimism of Oppenheimer’s Act of Killing and from the redemptive strategy of Pawlikowski’s Ida. When Mariana’s spectacle is over, nobody cares. Some spectators even applauded the anti-semitic speeches of the performance. The only cathartic moment is granted to the municipal representative who provided financial support for the performance. Even though he expected to see a different, much less radical show, he ends up praising Mariana’s rebelliousness. In the end, even the most complex, enlightened and self-aware spectacle can be used in a PR-campaign to underline trite facts that can be customized to please anti-Semitic patriots and liberal truth-seekers alike. Who wouldn’t want to raise a toast to a unified “nie wieder!”? 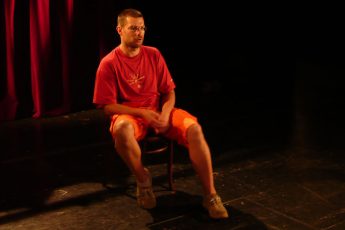 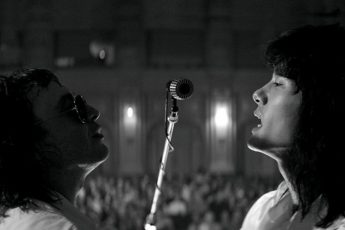