Cacophony of the Donbass 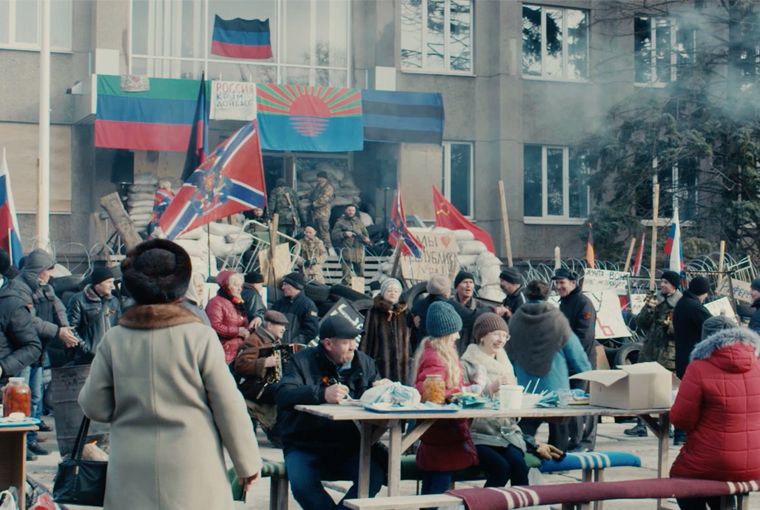 Returning to fiction after his astoundingly recent documentary Victory Day (Den’ pobedy), Sergei Loznitsa once again returns to the deconstruction of historic events, this time one that is unfortunately still underway. His film drifts around the eponymous Donbass region, in the midst of the ongoing war in Eastern Ukraine, loosely following characters that lead the audience from one set piece to the next, the common factor in each being grotesque absurdity. Donbass spends almost no time dwelling on either socio-political contextualization or military techniques, and instead concerns itself with the social structures arising from the conflict. From corrupt, idiotic local officials to brutish militia figures, no one is spared from the director’s damning portrayal, just as no one is spared from the lottery of explosions that occur randomly and without warning, destroying whatever or whoever happens to be there at the time.

Beyond the general lay of the land in a time of war, the dominant subtheme of the film is the consumption and production of media imagery. This dissection takes place at various levels, starting with most classical – news footage. This is made very explicit from the opening scene, in which a group of actors is getting ready for what seems like an ordinary TV shoot, but which transpires to in fact be a constructed news item. The footage of the actors posing as witnesses can then be seen on various screens in the background of the film. Finally, the narrative arc bends back full circle by returning to them for a final shocking twist, perpetuating the process of distorting reality. Meanwhile, a German journalist decked out in full flak jacket attempts to interview various soldiers but receives little response, except for garbled ranting accusing him and his family of being fascists (fascist being a catch-all term bandied about by almost everyone throughout the film when trying to win an argument). The poignant question of what he may meaningfully have to report back West is then suddenly broken off with a shell blast.

Loznitsa also probes the role played by more banal media imagery in people’s daily lives. At one point, we see first person footage entering a shelter for displaced people who are living in abominable conditions, with overcrowding and no functioning toilet. The fact of it being recorded is very clear from the way the camera moves through the space inquiringly, the inhabitants insisting that this and that infringement of basic living be filmed, yet no explicit mention is made of who is actually filming and to what end. What is apparent, however, is the commonplace nature of the act of filming, or rather, being filmed. In arguably the most grueling pair of scenes – in terms of content, length and excessive grotesqueness – a captured volunteer from the pro-Ukrainian forces is marched around a street in Novorussiya with a sign around his neck, inciting passers-by to attack him both verbally and physically. Jubilant mobile phone footage of the almost-lynching that follows is then joyously passed around at a carnivalesque wedding between a cartoonish couple who would not look out of place in a Fellini movie, attended by a cross-section of the local army leaders.

The various episodes fluctuate in their degree of visual and expressive excess, one of the most stylized but also effective moments coming in the form of a room full of captive businessmen frantically negotiating over their mobile phones to get someone to pay the army to release them. What remains constant throughout is the emphasis on the crowd over the individual, both within the frame and within the social psychology. Even the individuals picked out by the transient storylines tend to fall into general categories (fighters, small fry politicians on the make, semi-innocent bystanders) and largely blend into one another.

While it will come as no surprise to anyone that Loznitsa’s take on the devastating situation in the country he grew up in is an unflinching critique, the extent of its furious savagery still comes as something of a sucker punch. Donbass is not a film that attempts to propose any solutions or hunt out any silver linings. Rather, it simply and brutally evokes the nightmarish scenario that has become quotidian reality and lays the blame squarely at those who either profit from it or are ignorant enough to fall for the propaganda that surrounds them. The resulting road trip through debauchery and destruction will no doubt prove too excessive and nausea-inducing for many viewers, with its total lack of nuance or humanity to grip onto along the way. However, as a visceral evocation and response to a still shamefully disregarded crisis, it stands out as an undeniably impressive cinematic experience.