Some Ideas on the Meaning of Béla Tarr’s Animals

Curiously, there’s an animal at the center of Béla Tarr’s most difficult films – Sátántango, Werckmeister Harmonies, and The Turin Horse. Because of their allegorical, metaphorical, and referential meaning, these animals are often perceived as a key to decipher Tarr’s somewhat cryptic work. I seldom argue against interpretation, and find precise iconographic studies more illuminating than convoluted spiels about the impossibility to know. But I’m afraid that Béla Tarr has a point when he pleads us not to speculate. Mostly though, I believe we shouldn’t speculate because the characters in his films already do that job. They aestheticize and moralize the animals better than any film critic could ever dream of.

Sátántango is build around a sequence of about 40 minutes in which a little girl tortures her cat and then kills the pet and herself with poison. When the film came out in 1996, the scenes were reason enough for the UK to prevent its release, due to animal protection laws. Today, on blogs and in forums, there are still lively discussions going on about the moral righteousness of the scenes, as well as about the post-film life of the cat (that was adopted by the director after shooting). In the film, the cat is presented as a metaphor for the girl. Both are dumb, and helpless against people that are stronger than themselves. In the book by Krasznahorkai that the film is based on, the girl’s mother is a ruthless prostitute who kicks her daughter out of the house to sleep with another man. Tarr’s film doesn’t specify the mother’s profession, but she also makes the girl run out of the house after screaming at her. Under this light, the torture scene is only an imitation of the cruelty the girl experiences at home, and in the village. Indeed, there are few, if not no clean-handed villagers. This may psychologically explain the motivations for the girl to torture her cat, but it doesn’t disquiet the violence of the scene. Some people may have a different opinion however. For them, the essential part of the scene is not the torture but the suicide. There’s a sacrificial side to the story. When the girl kills herself she dreams of an angel guiding her cat to heaven. Later, a man chastises the villagers, blaming them for her death. So then, the whole scene can be seen as a kind of pagan ritual with a cathartic aim. This moral confusion about the meaning of the animal can be seen in all three films. Most of the time, the ambiguity is already set-up by the characters in the film, like in Sátántango, where the cat is perceived both as the self-destruction, and as the cure of a corrupted microcosm.

In Werckmeister Harmonies, villagers await the arrival of a gigantic stuffed whale brought to them as part of a circus show. When the whale arrives chaos breaks out. In the town square, fires are kept burning day and night, and soon a herd of poorly armed men storm a hospital and start beating up the patients. In another scene, we see a destroyed laundry store, probably visited by the same men. There’s also a woman, who wants to profit from the the people’s distraction to gain political power. This has lead many to sea the whale as an allegory for post-soviet Capitalism. Throughout the 1990s and after, Capitalism brought mistrust and instability to Eastern Europe, although it was anxiously hailed an exotic wonder. On a most basic metaphorical level, the whale, like the cat/girl, just represents the corrupted morality of the villagers. The animal is a gloomy mirror of the town. This is empathized by referential associations to dangerous sea-monsters like Leviathan, and Moby-Dick that reflect man’s own corruption more than those of another nature. But the whale does not cause unrest for everyone in the village. It strengthens the main character’s belief in the creative power of God. For a friend of his, who is apparently not very fond of his fellow men, the whale represents an evolutionary ideal. Importantly though, the whale, like the cat in Sátántango is already an ambiguous moral/aesthetic signifier for the villagers themselves. It is Janos, the main character, who admires the whale like a religious idol. And it is one of the villagers that describes the whale as “horrible”, and as a “mysterious, monstrous plague” before it even arrives. Another one says that it is “frightening”, yet another predicts “trouble.” It is difficult to think of a bigger contrast than between a divine being seen as a sign from the creator of the human race, and a diabolical underwater creature out to destroy it.

In The Turin Horse, a father and his daughter live in an isolated hut. When there’s a storm, their horse suddenly stops eating and drinking, and later refuses to take the father to work. But the horse is not the only thing that stopped functioning. Outside the hut, a well dries out, and inside, the fireplace extinguishes by itself. Efforts to turn it back on remain futile. Fire, water, and maybe even the air stop existing, until the film ends in darkness. In the last scene, the two protagonists can be seen eating their daily potato. While the father tries to convince his daughter that she has to eat, he seems to lose his appetite as well, and ends up staring at his plate like her. I think it’s pretty clear now: the animals reflect the people. Father and daughter loose their will to live, like the horse that stopped eating in the beginning of the film. They can also no longer perform their daily labor, and seem have already retreated from life since the beginning of the film. But they reflect the characters only because the characters decide to project their own state of mind onto them. The horse in The Turin Horse is not really ruined, unwilling to live or doomed. In fact, unlike its keepers, it looks quite vital and strong. Other than that, we don’t know anything about the horse. As with the cat, and the whale, the animal is just seen as an opportunity for some characters to act out destructive and/or self-destructive behavior.

What I’m trying to say is that if we see the animals in Tarr’s film metaphorically, allegorically, referentially, in short, as a symbol for the characters, we do exactly what the characters in the film do. They appear as distorted versions of human behavior, while the whole point is to note that the animals really don’t have anything to do with that. They distract us from what is going on. The Turin Horse is the perfect example for this. Instead of figuring out what is happening with the people, we are invited to speculate about the abstract meaning of an animal. It is almost ironic that by the time The Turin Horse came out, speculations about the Nietzschean interpretation of the horse were more popular than reminiscings about the cat in Sátántango. But this is, I guess, how humans work. Deep down, we are all artists, trying to find signs, and meanings that can illuminate the profundity of our existence. Personally, I prefer having oppression, destruction, and apocalypse represented by animals than having to see it in real life. Maybe that is why the most violent scene we see in Sátántango, is the one with the cat. It is a kind of substitute for all the brutality that is implied to have been going on off screen. The same goes for the whale. The only violent scene we see is the one in the hospital. Everything else is open for imagination. We only see the destroyed launderette, for instance, is only a remnant of an event, not the event itself.

Of course, many people would say that it can be more violent to imagine violence, and have it happening off screen than to have it performed at first hand. Some rape scenes, for example the one in Angelopoulos’s Landscape in the Mist, can appear more violent when they are hidden. In the Angelopoulos film, we only see a man going in the back of his truck, where the little girl is staying. The camera stays outside of the truck and we don’t hear any noise. Although we don’t know that the little girl in the film is being raped, we are forced to speculate on it, which produces all sorts of ugly feelings in ourselves, for example ‘Why am I thinking the worst although there is no proof for it?’ ‘Am I having perverse fantasies?’ And when we are assured by a blood-line running down the truck, ‘how many rapings must take place, and how many of them are silenced?’ But these questions all relate to what is actually happening. The rape is not a metaphor. In Béla Tarr’s film, we are unable to look things in the eye, because we permanently meet significations of reality, not reality itself. How infinitely more dark, and despairing would The Turin Horse be if there wouldn’t be the horse to blame, if we couldn’t celebrate it as an aesthetic symbol for the atrocities that are happening in the film. We don’t even notice how selfish, how miserable, and self-destructive the two main characters really are because the behavior of the horse allows us to think it is natural. But like every metaphorical object, the the horse is an artwork, and as such it fools us Aestheticists in believing, regardless of its symbolic implications, that it is important, and beautiful.

The moral dilemma of these films can be put as follows: for believers of aesthetic symbols, Art is always good. Art is like magic because it can make reality disappear behind another reality that symbolizes it. No matter how dark, and dreary, these symbols are fundamentally soothing because they also represent that creative moment, the magic that had to be present for the symbols to exist. For others, Art is illusion. Art is always bad, because if reality would be better there would be no reason for us to hide it, to want to create those soothing symbols. It doesn’t matter how well the magic is done, how real the symbol, when it always leads back to a more saddening, and mean reality.

I believe that this can explain why someone would stop making art. Imagine you live in a world where people feel okay, because they have the artistic skills to see reality through symbols, metaphors, references, allegories, and so on. These people feel okay, because it gives them 1) the feeling of understanding, and 2) the magic of being able to create. Imagine next that you are not feeling okay, and that you can’t make sense of these symbols, metaphors, references, and allegories. For you, they are only mysterious repetitions speaking from reality, not about it.

Béla Tarr’s films are about artists, like you and me, who use the artistic tools they are familiar with to feel okay about their environment. But few people are willing to see his films, and of those who do, an even smaller amount is willing to cast their interpretative tools aside. What, then, is there to do than to remain silent. But Tarr, who announced his retirement from filmmaking last year, even refuses to symbolize his silence. He is the director of an NGO defending the rights of politically threatened filmmakers and is planning to open a joint film-program in Croatia and the UK. If symbols can’t change reality, actions may. 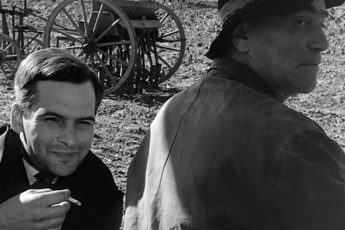