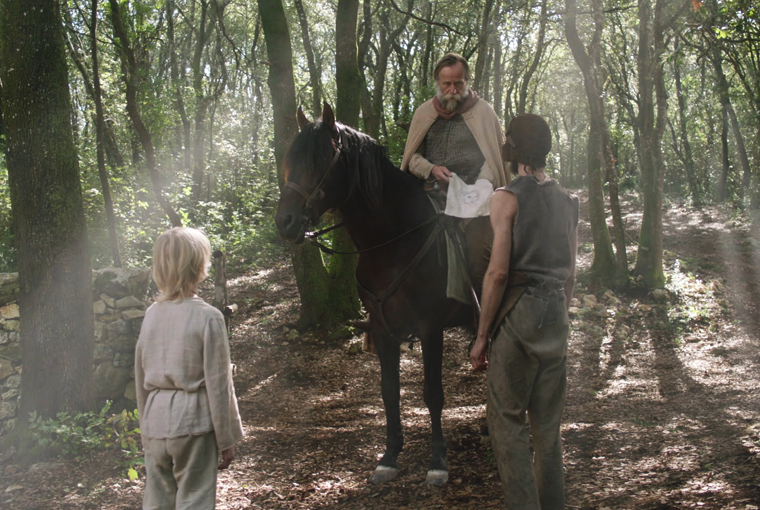 Inspired by a vision of a knight in shining armor glowing in the sun-bleached desert, young Janík (Matouš John) takes his child’s size helmet and sword and sets off for the Holy Lands. Shortly after, his ageing father Lord Bořek (Karel Roden) sets off in pursuit, clutching an embroidered likeness of him created by the boy’s mother (Eliška Křenková) as an endearing but futile means of identification. At first he seems to be close on his heels, but as the traces of him grow fainter and further apart, like the threads of the embroidery, Bořek becomes delirious, taunted by the ubiquitous presence of blonde-haired children wherever he goes. Like something of a medieval Broken Flowers (Jim Jarmusch, 2005), he soon sees his son everywhere. Just as his obsession begins to deprive him of his functionality, he crosses paths with an actual crusader, a strapping, stern epitome of religious righteousness (Aleš Bílík), who also happens to be blonde. He takes pity on the floundering father and takes him on the last stretch of his trip to the Italian sea, where he intends to set out for the Holy Lands.

With its bleached aesthetics and sparse dialog, the film maintains a poignant atmosphere of loneliness and scarcity more concerned with evoking a psychological landscape than retracing a historical route. As such, little concrete information is provided about the passing of time or the shifting of locations, which is presented as secondary to Bořek’s evolving relationship to his surroundings. Indeed, the action shifts seamlessly between the characters’ actual experiences and their memories and thoughts, without always clearly demarcating the border between these visual modes. The desert, in particular, serves as an external visualization of internal desires and fears, which is at first imagined as a theater of heroism and glory by both father and son. However, as the dense forests start to thin and more arid environments emerge, the reality of the desert becomes more oppressive and threatening.

The film plays largely on Freudian tropes of masculine identity and aspiration, with the lack of expository details essentially reducing the characters to hollow archetypes. Both father and son aspire to models of manhood that they cannot actually fulfill, bringing about the narrative crisis. Janík is clearly inspired to embark on his journey by a desire to shirk off his childhood, and specifically to emulate the image he has of his father. Bořek reiterates numerous times that his persistence in his seemingly futile mission is motivated by husbandly duty towards Janík’s mother (who, as a side note, is never given a voice and never does anything except embroider and pine). However, at least some amount of paternal affection can be assumed from the intensity of his fervor. Equally, his apparent failure to find his son seems to undermine his self-image as a patriarch and alpha male, especially in terms of his authority over his son, as revealed through one of the few conversations with the knight. His shortcomings in this respect are also highlighted by the courage and masculinity of the younger crusaders, and indeed, the role of the mysterious crusader remains ambiguous. In terms of the story development, he is certainly needed for Bořek to be able to continue his journey. In terms of symbolism, however, he mainly seems to provide a counterpoint to the ageing, beleaguered Lord as a representation of the qualities he would presumably like to embody – strength, benevolence, piety and wisdom.

Religion occupies something of an uncomfortable position in the plot. On the one hand, the film seems to be critiquing the propaganda and social mechanisms driving people to leave their homes on a deluded quest for grandeur to accomplish an esoteric goal that certainly doesn’t justify the high likelihood of death. Moreover, from today’s perspective it is hard to justify the crusades as anything other than thinly veiled colonialist violence on the part of Europeans who can be considered gullible at best. Indeed, the whole story is predicated on the disruption triggered when Janík decides to pursue goals that are completely unrelated to his immediate surrounds or life. Yet the most heroic character, the young crusader, is ultimately validated in his actions and religiosity when he sets sail in his gleaming white robes. At this point in time, it is hard to watch any image of boats crossing the Mediterranean, especially boats filled with men facing a high likelihood of mortality in quest of a promised land, without drawing parallels with today’s migratory crisis. Whether this was intentional or not on the part of the director is not entirely clear, however.

Overall, Little Crusader is solid, well-constructed and watchable, with beautiful cinematography and a hypnotic, dreamlike atmosphere and occasional strong images, but ultimately has little to offer beyond the surface level. Nevertheless, while it is unlikely to compete with František Vláčil’s Marketa Lazarová (1967) or Valley of the Bees (Údolí včel, 1967) in the annals of Czech cinema, it certainly represents a very decent standard of technical and cinematic accomplishment.