First as Comedy, then as Calamity 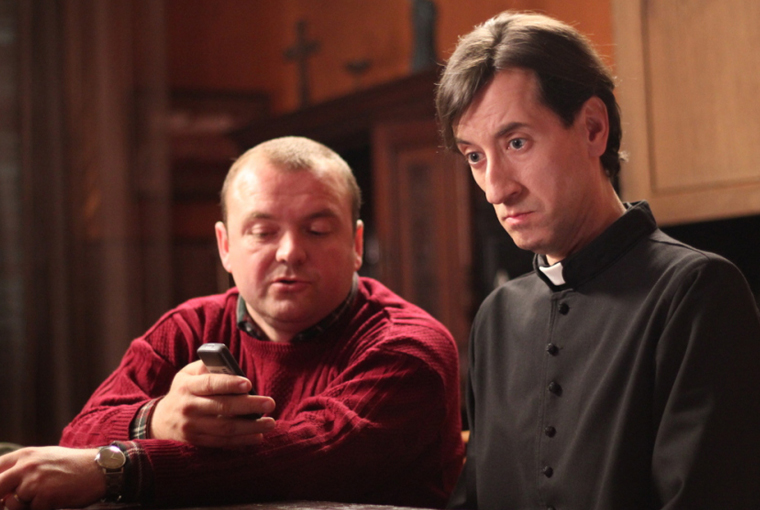 Vinko Brešan’s film starts as ludic and ends as lugubrious. Fabijan, a young priest, eagerly seeks his place in an idyllic Croatian island town. He believes he can reverse the low Croatian birth rate through an ambitious plan to poke holes in all the condoms sold to his parishioners. The comedy starts out full of energy and promise. But once Fabijan discovers the folly of his plan, he lacks either the ingenuity to set things right or the fanaticism to see it to the end. His indecision bogs down the film and his character is relegated as background to the chaos he’s created.

The film opens with a visual gag: the camera tracks over rows of identically dressed babies to settle on a defrocked and wild-eyed Fabijan. He insists to a young visiting priest that he is the father and mother of the babies and agrees to confess his tale. The story cuts to a flashback, wherein a younger, ecclesiastical Fabijan breaks the fourth wall, explaining how, in coming to his new parish, he finds himself unappreciated by his congregation. When the local convenience stand owner, Petar, expresses remorse at selling condoms which “kill people,” Fabijan enjoins him to do his duty as a good Catholic. He reasons that the plummeting Croatian birthrate justifies the trickery. The two set to work puncturing prophylactics under cover of night. Meanwhile, Petar uses his expertise of the town to graph out who is copulating with whom for the benefit of Fabijan, who can’t stop himself from imagining every interaction. His raunchy mental images, flashed onto the screen, reveal a crude and naive understanding of sexuality. Petar and Fabijan go as far as to spy on the mayor on a night excursion to a mystery partner. Tellingly, the accomplices seem more shocked at a tender gay kiss than at visions of heterosexual albeit extramarital coupling.

Along the way, The Priest’s Children swipes broadly at conservative elements of society: from the xenophobic pharmacist who calls AIDS an “anti-Croat conspiracy,” to the cynical bishop who arrives at the island in a luxury yacht. There are indications that this repopulation mania may have its roots in the trauma of war. But the film never really goes far enough in any direction. Fabijan realizes his mistakes early on, so there’s no real climax of revelation. The film loses its elan and becomes not just a black comedy but a depressing joke. To be fair, it’s hard to make miscarriages funny. But the raciness and buoyancy early in the film show that it had the guts to succeed with a more dynamic Fabijan.

Still, for its flaws, The Priest’s Children has clearly resonated with the home audience: it is the most watched Croatian film of this century so far. The theme of social manipulation by an ideologue is of course a potent one for Eastern European filmmakers. Fabijan is guilty of overlooking individual desires for arithmetical solutions that only work on paper: if the number of births exceeds the number of deaths, he thinks, the community will prosper. It’s interesting to see the clergy being critiqued as would-be engineers of human happiness in this highly Catholic country. The Priest’s Children warns us against the quantification of life according to ideologies, whatever they may be.