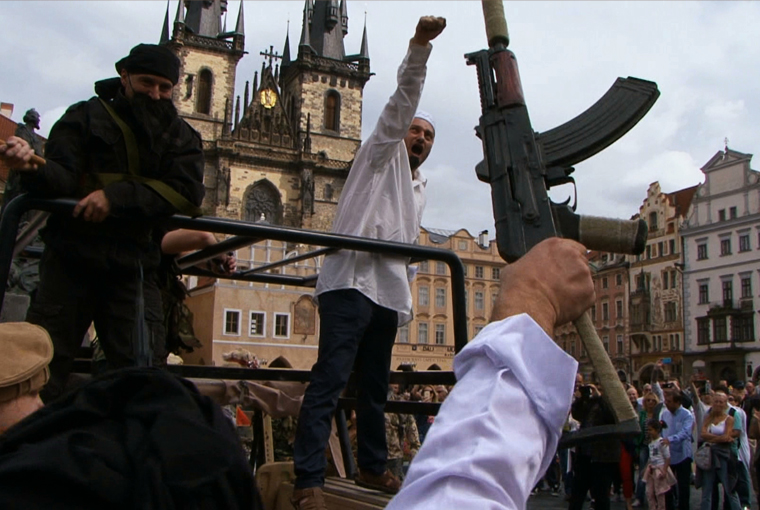 There are few places where the political instrumentalization of the refugee crisis has been as absurdly theatrical as the Czech Republic. With just 1,156 people applying for asylum in 2015 in a country of ten million,1 the political landscape has born half a dozen extremist parties whose calls for an end to Europe’s so-called “open-door policy” have quickly been adopted by the big political players. Chief among them are president Miloš Zeman, once a pro-European Social Democrat who helped prepare Czech Republic’s EU entry as head of government, and Andrej Babiš, finance minister and agribusiness magnate who is likely to fulfill the Czech’s ever-long pining for a technocratic leader after the upcoming elections (never mind his double role as entrepreneur and tax auditor). While both Zeman and Babiš have flattered Germany and Brussels by denouncing their supposed openness towards refugees, nurturing wild and inhumane conspiracy theories, Zeman in particular has additionally helped channel xenophobic sentiment towards Islam. The religion, he suggests, is utterly incompatible with European values, a view shared by many Czechs. While such claims may sound familiar to anyone remotely interested in European politics, the Czech case is special insofar as its choice of Islam for the case against accepting refugees is particularly absurd. Only about 20,000 Muslims are estimated to be living in the Czech Republic,2 many of them families of former students who went to university in the 1970s and 1980s.3 This yields an interesting scene for investigating fear and hatred stripped down to their bare essentials, with the Other – in this case an imagined enemy who is supposed to erode so-called Western values – barely conceivable.

Zuzana Piussi’s documentary Czech Allah approaches the Czech debate about refugees from an activist perspective. On the one hand, she looks at the sizeable anti-refugee fraction of Czech society through a portrayal of the “Block against Islam”, a political movement centered around rightwing figure Martin Konvička. On the other, she follows individuals who are literally swimming against the current by helping those whom the rest of society view as intruders and harbingers of evil. In each case, she takes a hands-on approach, capturing speeches, meetings and in-between moments in a non-judgmental fashion. Thus, Konvička is seen singing the Czech anthem along the president, eating cake during an informal political counseling, and heard on the other end of the line while his colleague prepares for a photo shooting during which the movement’s elitist if straightforward political strategy is revealed, which roughly consists of feeding the “stupid” voters easy answers. Unsurprisingly, Piussi gets even closer to the pro-refugee activists whose lack of political ambitions make them less secretive, above all Eva, who has an affair with Isaak, himself formerly a refugee. Their relationship falls apart when Isaak claims that he was attacked by a knife which both the police and Eva call into doubt.

Though Piussi’s approach is Wisemanian insofar as it tries to radiograph these political movements and agents without taking a clear stance to either one of them, it falls short of both Wiseman’s rigidity and depth. This may partly be a problem of length – where Wiseman took a notorious four hours to make an institutional portrait in At Berkeley, Piussi takes a third of that time to look at two opposing political camps. But it is clearly also an issue of approach. Piussi is unable or unwilling to engage with the contexts her agents are engaging with, presenting their actions as isolated acts of convictions. As a result, Piussi is seldom able to look beyond the public image created by its protagonists, thus essentially reiterating the rhetorical conflict between the two camps. We hear many a tirade against both Europe and the “well-meaning” but naïve Czechs waiting to be enlightened about the true nature of Islam, or witness frustration with a lack of empathy and understanding for those less situated on the other side. Instead, it would have helped to know that Konvička’s radical party colleague Jana Volfová, who famously warned of stonings should the European Commission have its way,4 has switched political parties across the political spectrum four times since 2002, or that their Block’s break-up had to do with neglected financial commitments rather than ideological quarrels. Similarly, Piussi never bothers to try and reveal what the situation in Czech detention centers really is like, simply letting accusations of abuses hang in the air. (Chasing Asylum, a laureate of this year’s One World film festival Prague where Czech Allah screened as well, proves that this is possible, however difficult it may be.)

The best that Piussi can hope to do with her intimate snippets is hint at some of the subjective causes for her agents’ joining their respective movements – such as a possible yearning for a sense of community and love in Eva’s case, or of the authoritarian political ambitions of Konvička, which eased the break-up of his “Block against Islam”. But such causes are no contribution to the refugee debate. They are hypotheses on why people hold the positions they hold, and not reasons for why someone should hold a position or other. From a Wisemanian point of view, this would be fine if Piussi at least explained the more elaborate and nuanced workings of political organisms that transcend personal ambitions. Critically though, her reserved depiction of the debate consisting of one person’s word against another’s doesn’t even reflect the Czech’s mindset, which largely indulges in anti-refugee sentiment.

By focusing on politically active members of society from opposite political camps, Piussi not only exaggerates the polarization of Czech society, which is in truth much less political than the documentary suggests, and much more complicit in anti-refugee sentiment than the film acknowledges. She also corroborates the rightwing clichee of political actors being either idealists or realists which Konvička and his entourage deploy throughout the film. This seems to be a sign of nothing less than a lack of insight. While a good documentary doesn’t require magic – such as entering people’s minds – it does demand patience, trust and understanding. This is especially true of organizational portrayals which try to depict institutions of movements that work according to rules its agents themselves may not be aware of. Even when everything is out in the open, it takes the right eyes to know where to turn one’s attention. Few people have that talent. With this film, Piussi didn’t yet prove she does.