Homecoming Now and Then 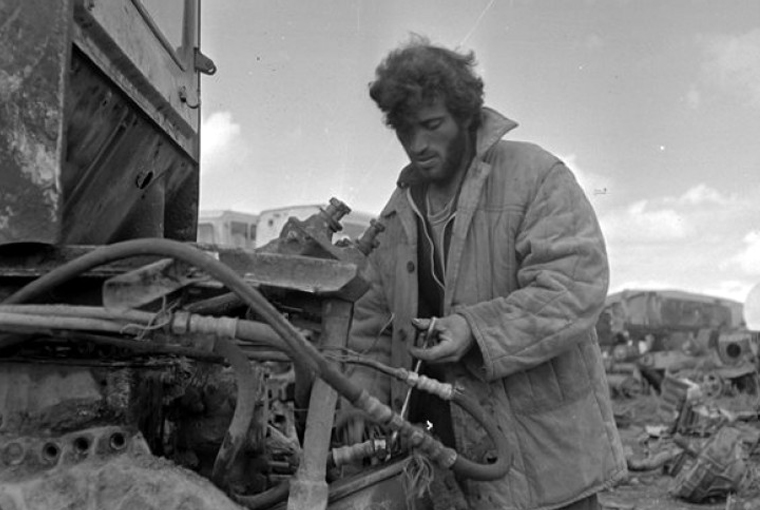 Between 1988 and 1990, Armenia experienced a massive vague of displacement. Although migration flow was a Transcaucasian phenomenon, with Armenia also receiving a vast number of migrants, the number of people leaving the country was far greater than of those arriving. Various NGOs estimate that hundreds of thousands of people left Armenia every year in the 1990s. From 1988–2001 about 1.3 million people, which equals 40 percent of the current size of the Armenian population, left the country.

The first couple of minutes of Khachatryan’s Return to the Promised Land are composed of archival sequences that depict the beginnings of this population decline and intranational resettlement. An intertitle reading “Leninakan, December 1988” recalls the earthquake of 1988, which left roughly half a million people homeless. The same year, the collapsing Soviet Union reawakened century-old ethnic conflicts between Armenia and Azerbaijan. An estimated 330 000 Armenian refugees living in Azerbaijan arrived in Armenia between 1988 and 1990. Some of them later moved into the abandoned homes of Azeri refugees in the border region of Nagorno-Karabakh. Although Khachatryan does not state it explicitly, presumably this is where and when (1991) the story of the film begins.

A family of Armenian migrants settle in an unnamed territory. The conditions are unfriendly to life: the landscape is covered in snow, the houses are ruinous, and there are no signs of an existing infrastructure. Nevertheless, they rebuild a ruined house and start cultivating the surrounding fields. Soon a child is born, and other families start repopulating the area. As in his other movies, Khachatryan prefers not to let his characters speak. But their faces look determined, patient, peaceful and convey a sense of hope. Faith in the future is further accentuated by the juxtaposition of images depicting destruction and reconstruction – a technique Khachatryan perfected in his later film Return of the Poet. The spectator never sees how the ruinous houses and littered streets are polished. Instead, Khachatryan shows images of a newborn calf or the planting of potatoes. Birth and cultivation symbolize that the home of return is blessed and the promised land regained.

The biblical story to which the film’s title refers can be found in the Books of Ezra and Nehemiah of the Old Testament. There, the Jews of the fifth and fourth century B.C.E. return to Jerusalem, seventy years after their holy temples were destroyed and they were chased out of their homeland by the Babylonians. This story is often read as dealing with questions of theodicy: if God is good, why does he allow bad things to happen? Why did God not stop the unpopular government of the Babylonians? Why did He force his people into exile? And why did He risk to let their culture die through the assimilation to the foreign rule? The Bible’s answer to these questions is that God actually did not abandon his people. They abandoned Him. Only if they find a way back to God, will He allow them to return to the promised land. And this is what happens. Thanks to a generous Persian King named Cyrus the Great, who overthrows the Babylonian empire in 538 B.C.E., the Jews are allowed to return and rebuild the temple (even if it takes them another two decades to complete the task).

The comparison with the Armenian people of the late twentieth Century is quite recognizable. Not only did their cultural values recede during Communist rule, which lasted pretty much as long as the Babylonian rule did in the Bible, but, and this I would guess is what Khachatryan wants to say, they also abandoned their spiritual values. They replaced their traditional system of beliefs with a foreign ideology, thereby threatening century-old traditions to perish.

In the film, the difficulty of going back to communal practices worthy of spiritual value is most visible in the reestablishment of self-sustained family communities, a life-style the Communist regime tried to replace with a homogenized and industrialized society. The family in Khachatryan’s film finds spiritual happiness in the close-knit and supportive communal structures that have always defined the Armenian people. Khachatryan’s Return ends in perpetuity. Seasons come and go and the villagers have adapted their life to the way of nature. They have rebuilt their temple.

The story in the Bible, however, goes on. In the Book of Ezra, finding the way back to the Lord also means, for instance, to divorce all Jewish men who have married foreign women. In another passage, it means to exclude the Samaritans – a people from southern Mesopotamia forced to resettle by the Assyrians – from helping with the rebuilding of the temple. Does Khachatryan avoid showing these kind of spiritual conflicts? While he quickly addresses the ethnic conflicts that resulted in the Nagorno-Karabakh Wars in the archival footage that start the film, there is nothing in the film indicating that the return of his people was, in many cases, a racially exclusive affair. In comparison with the Bible, Khachatryan’s vision of “coming home” is perhaps more Romantic and in that also more true to the nostalgic and wistful traditions of Armenian culture in contrast to the dark, existential realities of the Old Testament.