Shock Aesthetics from the Balkans 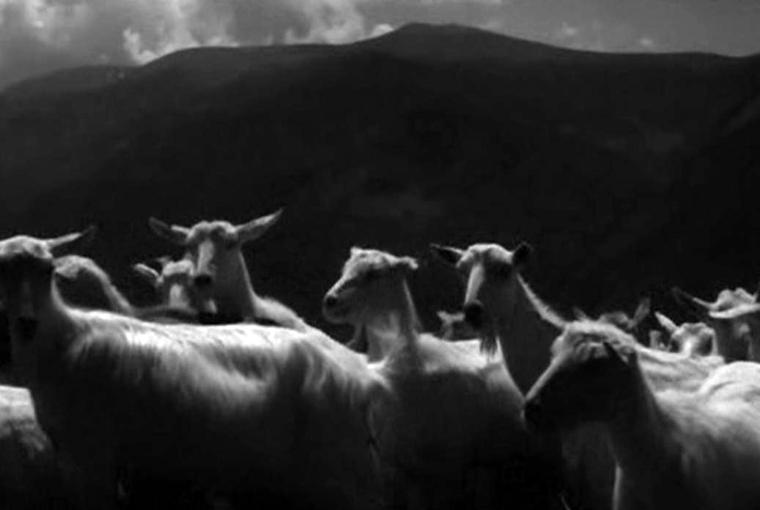 My film studies education is now a memory from another decade. However, one lecture has stayed with me throughout the years. In his class on the Sociology of Arts, Prof. Ivan Stefanov asked us to name the reasons for which Metodi Andonov’s The Goat Horn (1972) has been the most successful film of Bulgaria’s cinematic history. The Goat Horn is a sacred cow in Bulgarian culture, and viewers, as well as critics, usually take it as an artifact, or better yet as a black monolith, no questions asked.

Still, we tried our best: “Because Metodi Andonov is a theater director and approached the material differently?” “No.” “Because of the topic, the Ottoman invasion being in tune with Socialist propaganda?” “No.” “Because of the rape scene and the nudity?” [short pause] “No.” And so it went, until we gave up, and our professor answered: “Because of the film’s shock aesthetics.” Again there was a long pause, some of us chuckled. How to teach the aesthetics of shock in the 21st century?

To comprehend the effect The Goat Horn might have had in the early 1970s in Bulgaria, we need to imagine that it was welcomed by an audience that spent more than two decades on solid doses of Socialist realism. There were no auteurs in the Western European sense, let alone dissidents – art in the country was shy and very much in line with the Party directives. Yes, the dynamics of the late 1960s produced several breakthrough works, but most of them were banned or not allowed to travel abroad. Censors were watchful for any hint of indecency (even a glimpse of an Orthodox church on film was enough to occasion disapproval).

In this context, The Goat Horn must have been a true shock. Opening with a shot that reads like a tribute to Andrea Mantegna’s painting The Lamentation of Christ – with the goatherd Kara Ivan (Anton Gorchev), his wife (Katya Paskaleva), and their daughter (Nevena Andonova, Metodi Andonov’s own daughter) lying in bed – the storyline is quick to dismantle the holy trinity of this family in a very corporeal manner. In the first five minutes, we see Kara Ivan’s wife being sexually assaulted by a group of Turkish soldiers in the absence of her husband, while the girl stands in the corner desperately crying for help. Not only is this one of the first sex scenes filmed in Bulgaria, it is also Dimo Kolarov’s camera that maps the emotionalism of the events, immersing the viewers into the body of the victim soon lying lifeless.

“This world is not for women,” snaps Kara Ivan, as he cuts off the hair of his daughter. In the years to come, he would raise the adolescent Maria (again Katya Paskaleva) in the mountains like a boy, in a silent non-relationship that is closer to camaraderie. Preparing their revenge against the Turkish assailants in cold blood, they would stab each corpse with a goat horn – a primitive knife that stands for their status in the Ottoman empire but is also clearly a phallic symbol. Nevertheless, what seems to be an openly Freudian rendition of patriarchy gone to the utmost, slowly edges towards a rather folkloric, Jungian style. Vaguely positioned in the timelessness of Bulgarian history under Ottoman rule (somewhere in the 17th century), the rough monumentality of the story is sculptured through the black-and-white imagery and the scarce dialogue. The pace and the editing are very much à la Kurosawa. Beauty and love are rendered in shy, archetypal forms, therefore the actual shock must have come with the cinematic materialization of a topic and imagery so innate in the oral tradition.

Metodi Andonov’s both masterful and seemingly effortless mise-en-scène must have struck a very particular chord with an audience that suffered the effects of propaganda fatigue. Moreover, in a post-1968 world, a certain cognitive dissonance had settled in the Eastern Bloc. The Goat Horn marries Socialist ideologemes and mythologemes, and returns to a time of political innocence by evoking fundamental Socialist tropes, such as the abused motherland, the haidouks as proto-partisan fighters against social injustice, the desexualization of women, or the concept of engineering a new humanity. Meanwhile, the story relies on classic folk-song and fairy-tale motifs: the kukeri, the tragic love, the goat fleece as a tool for magical metamorphosis.

Legend has it that three million viewers saw the film after its release, thus turning it into the ultimate box-office sensation of the country. What is sure, though, is that in the last 45 years generations of Bulgarians watched The Goat Horn on TV in the company of their families – one could say that the narrative has been deeply implanted in the collective unconscious of the nation, including the “How I wish I’m not alone” refrain of the theme song, just as the rape scene has prompted a series of cringe-worthy sex scenes in Bulgarian cinema.

Notwithstanding, the actual eroticism of The Goat Horn resides in the literary origin and its power relationship with the screen adaptation. Nikolay Haytov’s eponymous short story was originally published in Wild Tales (1967) – a collection scooping into the fabled past that was instantly recognized as ontologically Bulgarian. The Goat Horn is not the first feature based on a story from this book, but it is certainly the most famed, also due to the creative differences between Nikolay Haytov and Metodi Andonov that took epic proportions. Needless to say, the novelist was flattered by the success of the film yet not very pleased with the way his script was treated.

This is how two decades after Metodi Andonov’s death the unthinkable happened – another screen version came out. Thus The Goat Horn became the sole Bulgarian film to undergo a remake by a local director. The filmmaker who decided to undertake this challenge was Nikolay Volev, a somehow controversial figure in the context of Bulgarian cinema, despite his widely celebrated career in the 1980s. After having debuted with a doppelgänger comedy (ironically, starring Todor Kolev, the archvillain from the first The Goat Horn), he then developed a taste for drama and naturalism. The 1994 version of The Goat Horn is his first feature film after the fall of the Berlin Wall. As a matter of fact, it is also one of the first productions to be started and wrapped up after what in Bulgaria is called promyanata (“the change”), and the spirit of unstoppable liberation is imprinted on every frame.

Again the first five minutes of the film include a sexual act, this time matrimonial, that is quickly followed by the rape presented here in a straight-to-video manner. In the twentieth minute Maria (Elena Petrova) is already all grown-up, and the conflicting emotions of her father (Alexander Morfov) seeing her bloom are carefully articulated, so that the story does not really leave the terrain of the Freudian perversion. The hypnotic spell of the first version is gone. Whereas Katya Paskaleva’s interpretation of Maria as a tomboy contains elements of humor, Elena Petrova’s depiction implies possible mental illness, which makes the protagonist quite problematic. (Curiously enough, Nikolay Volev’s previous project was a documentary on a state institution for children with mental development problems, and being released in 1989 this film was largely interpreted as a metaphor for Socialism.)

In this new version of The Goat Horn, the plotline complies more or less with Nikolay Haytov’s short story. However, apart from detaching Maria’s character from the heroic, Nikolay Volev added the typical 1990s must-haves, such as full-frontal male nudity, masturbation, explicit violence, also leaving Alexander Morfov’s earring on screen as a token of the Zeitgeist. Even Dr. Rumen Bostandzhiev, once branded as the nation’s first sexologist, appears in the end credits as a consultant. The kukeri masks, briefly worn by Kara Ivan and Maria in the first film, become an important prop in Nikolay Volev’s take, with which his film descends into a commedia dell’arte of sorts. Not that the commedia dell’arte isn’t another powerful archetypal rendition of sexuality, thus offering ground for a different type of culturological approach, yet its Western origin is diametrically opposed to the Bulgarian folklore, or at least this is what 45 years of propaganda wanted people to believe.

Nikolay Haytov was quite disappointed by the end result of this second product, while the then emerging tabloids proved to be jubilant. At a time when no one really cared about the aesthetics of shock, it was all over the screen. On a side note, the fact that Nikolay Volev’s film had a certain festival and arthouse distribution around the world – one of the first, post-1989’s triumphs of democracy – urged many emerging Bulgarian directors to take the same path and go for the sex-and-violence model, which did not help the search for an authentic style.

Anyway, if there is one adaptation of The Goat Horn the writer was truly happy with, it is Petar Lukanov’s eponymous ballet (1983-), with music composed by Krassimir Kyurkchiysky. So much for the magic and eros of cinema.