A Jewel from Prague 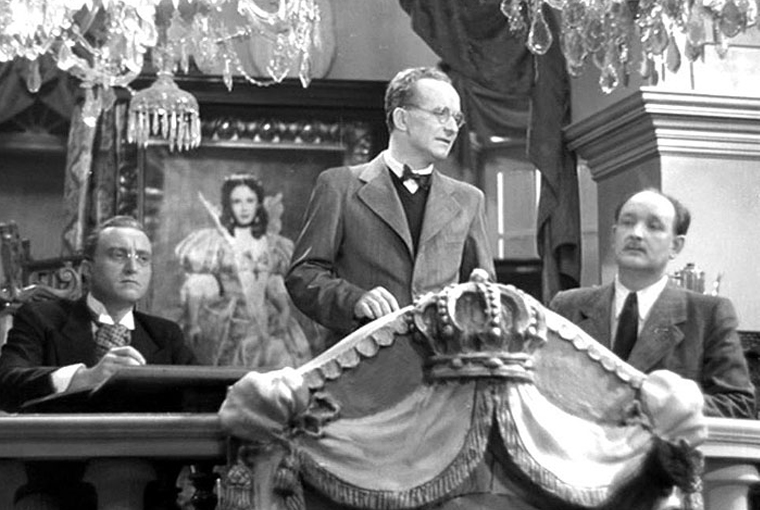 Přemysl Pražský’s Prague Seamstresses from 1929 was recently shown in a restored version in the Cinemathèque in Paris. The film is a silent comedy about the children of a wealthy landlord called Barnabás Bernásek (Theodor Pistek). Both of them are fed up with Barnabás because he wants to keep authority over choosing the right partner for marriage for them. Barnabás wants to marry his daughter  Běla (Marie Kopecká) to the rich but homely Mr. Puiuk, and would like his son to make a similar match based on wealth and social status. His daughter, however, prefers the shy and poor Vláda Skruzný (Jirí Hron) who is speechlessly in love with her. Her brother Jénik, played by the ingenious Karel Lamač, is about to become absorbed by a likewise unsatisfactory match. He is in love with the beautiful dressmaker Márinka (Máňa Ženíšková), a poor orphan. But Jénik has a plan how to keep his sister and himself from becoming victims of their father’s arrangements, and the rest of the film shows how he achieves this. His idea is to distract Puiuk’s love for Běla by making him fall for his own beloved Márinka. This is an easy task, since Puiuk is about to marry any girl that would take him. A running gag in the film is his declaration “I would like to hold you in my arms for the rest of my life”, which he repeats constantly and to all of Márinka’s colleagues. Márinka, of course, does not fall for Puiuk’s love since she loves Jénik, but she’ll remember Puiuk’s lecherous advances when she’ll meet him again in Barnabas’ apartment. What they don’t know: the encounter was arranged by Jének, so that Barnabás will discredit Puiuk as a suitor for his daughter on the basis of infidelity.

Although not unique in its story, the film intelligently connects the various love stories, and elegantly contrasts the different personalities of the lovers. Puiuk is a rich skirt chaser with little success. But he’s sociable and has an iron will. His opponent, on the other hand, seems to have little interest in any other woman but Běla and is discouraged by the most trivial infractions. Indeed, it is up to Běla to make him admit his love for her. But his enthusiastic nod as an answer is not enough. Běla would like to hear some sweet words about the beauty of her eyes which intimidates the insecure Vláda who is unable to improvise on the spot. Unlike the close-mouthed Vláda, Puiuk has a sweet word for everyone, although no one ever asked him for them. In the end, only Vláda changes, with the help of Jénik, who gives him a short lesson in resoluteness.

Jénik plays the role of the Harlequin. With his grimaces and joviality, he resembles the clowns in the classical love comedies of Goldoni, Marivaux et al. He appears as a baker throughout most of the film, which gives an interesting touch to the usual role of the clown as a penniless servant. Jénik, with his rich father, is not penniless, of course, but he would rather be because he is afraid that women might love his wealthy heritage more than himself. This is precicely the problem of his father, for whom wealth and desire overlap. To rule out the possibility of anyone loving him merely for his money, he goes incognito and wins Márinka’s heart wearing a shirt covered with flour. Like the Harlequin in many plays, he is also the puppet master of everybody else’s lives. He encourages Vláda to ask Barnabás for his sister’s hand; he traps Puiuk in his house where he meets Márinka who is still furious at him for his prurient attempts in seducing her; and he thereby uncovers Puiuk’s base intentions in front of Barnabás.

Přemysl Pražský’s turns this story into a unique work of art. One of the most remarkable scenes is when the seamstresses have a little break from work. They quickly push the sewing machines aside and start dancing. The music for their party is provided by a violinist and an accordionist who are playing on the street. Pražský cuts from the dancing women to the musicians in ever shorter intervals, creating a remarkable rhythmic tension. Although the scene is completely silent, the rhythm of the intercutting scenes make you think you are actually listening to music. It is a sort of trompe-l’oreille, relying on the audience’s habit to associate instruments with sound. The dance scenes of sound films (the first “talky” was made in the same year as Prague Seamstresses) relied on the same kind of cross-cutting between dancers and musicians – notable examples include the Jazz scenes in Robert Siodmak’s Criss Cross (1949) or Rudolph Maté’s D.O.A (1950).

This almost experimental scene is not the only one. Other astonishing sequences include the cake fight between Puiuk and Márinka. In this scene, Puiuk chases the girl after he unsuccessfully tried to kiss her in his own apartment. Márinka then defends herself with a cake Puiuk bought for her, throwing bits and pieces at the love-hungry man until he is trapped in a corner where he gives up defense and lets the hailing pieces of cake break upon his head. In the meanwhile Márinka starts enjoying the humiliation, and starts eating some of the cake, licking her fingers in a seductive way. The scene is hilarious. Within a couple of seconds Márinka and Puik change roles completely. In the beginning of the scene Márinka is the victim, running unknowingly into the lion’s trap because Puiuk had exchanged the addresses of Márinka’s delivery. The pleasure is on Puiuk’s side who thinks he can win her heart and, as Márinka shows resistance, applies force. But Markinká uses Puiuk’s force against him, and turns the situation around. Covered with cream, Puiuk looks helpless and ruined. Ironically, Jénik intentionally covered himself with flour, a cake’s main ingredient, to seduce Márinka. The cake fight is a lesson that Puiuk will never learn. The moment his outer appearance is attacked he loses his character. Puiuk doesn’t understand that one can also be beautiful without wearing silk and fur.

This might be a shallow lesson, but in 1929, and perhaps even today, it had its relevance. Márinka and Jénik are real. They don’t care for social conventions. Of course, Jénik has the luxury to transgress class at his will, which Márinka as a poor orphan, does not have. So the fun in going anti-establishment might be more fun when one knows that one can always return to it. But Márinka seems to be as unaffected by awe for the people above her as Jénik. She enjoys showing her tongue at the rich Puiuk and is as inventive in her rebuff of his pretentious way of life as Jénik is against his father. Happiness, Přemysl Pražský tells us, can not only exist without material wealth. It may also be generated by defying wealth when it is offered to us.