Wiktor Grodecki’s Not Angels But Angels (1994) 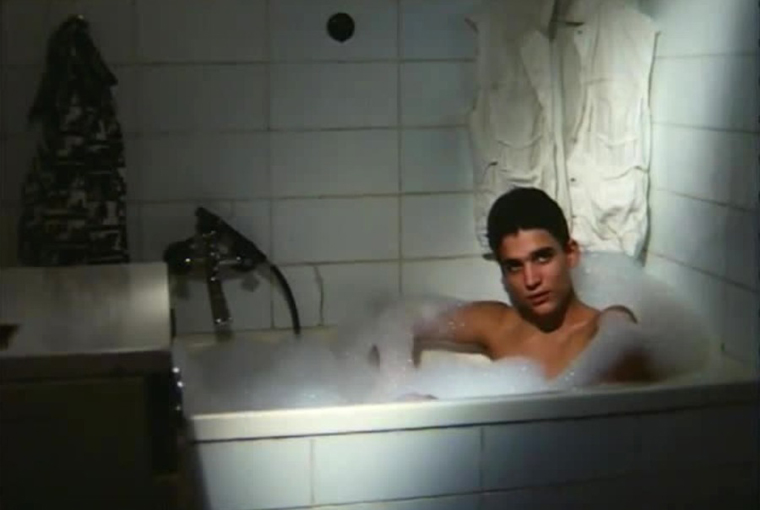 Prague is a city whose ugliness matches its great beauty and which is bursting with as much deviance as it is with history. In the 1990s, Polish director Wiktor Grodecki delved into the capital’s nooks and crannies in order to produce a trilogy surrounding the theme of young male prostitution. The first of these films is the documentary Not Angels But Angels that is both praised for having broken taboo and criticized for the level of manipulation and moralisation that hides behind the frank treatment of Prague’s male prostitution. It is true that the film walks a very fine line between entertainment and raising awareness. Yet, it should be remembered that Grodecki was opening up a conversation that, being inherently homosexual, had largely been repressed during the years before. Released in 1994, Not Angels But Angels, was produced only two years after homosexuality was declassified as a mental disorder by the World Health Organization and it is still one of the better known LGBT films of the Czech Republic two decades later. This is precisely why it is time to revisit this distressing look into the lives of the young rent-boys of Prague and reassess how much the documentary exposes the problem and to what extent it condemns it to obscurity.

The film introduces us to a selection of young boys who have found themselves selling their bodies in the city of Prague. In response to Grodecki’s audible, off-screen questions, we learn a little about how they became involved in prostitution, how it works, who their clients are, why they hustle and what their hopes and fears are for the future. Their fragility and youth is cast onto the big screen in a way that makes it tempting to direct all the blame towards those who exploit them, yet, the situation is undoubtedly more complex than our instinctive emotions would lead us to believe.

The ethereal imagery and music combined with the interview footage play on these very emotions. Images of Prague’s holy statues are consistently woven into the narrative, Bach’s St. Matthew’s passion exalts in the background and trumpets blow deep to signal the coming confessions. Nevertheless, wherever there is virtue, evil is usually lurking nearby. Snippets of heavy metal, dark shadows and timid talk of deviancy counter the notions of heaven and signify the lion’s den that surrounds the young prostitutes. In bathing the topic in religion this way, the notions of good and evil are intensified, even polarized, to the point that the boys are separated from the dirt and the rubble and shown as innocent or elevated in some way. The most striking example of this is in the train station, where the camera moves around its lower levels making a spectacle of homelessness, drunkenness, intoxication and even madness. Poignantly, it then sweeps up to reveal the church-like dome of Hlavní Nádraží where the glowing and youthful faces of the boys stare down, indifferently. They are used to this world, they have made their bed within it many a time but, with the light cascading down on their heads, Grodecki seems to say that they are not to blame. They are the innocent, the naïve, the exploited. This is reiterated later on in the film when a moment of two boys dancing is compared to two embracing cherubs in the shot that follows. It is comforting to see that the director does not condemn the prostitutes for their actions but nevertheless unsettling to see such extreme ideas of good and evil so closely linked to religion. While it provokes sympathy, the binary representation of a complex situation does not invite deeper understanding of the social and political context that surrounds the boys’ choices, or lack of them.

A deeper comprehension of the subject is also inhibited by the failure to question further. The same set of questions is applied to each of the interviewees and rarely followed up on despite the intrigue that their responses arouse. The runaway status of nearly all the young men illustrates this problem in the sense that the subject is not at all dealt with throughout the entire hour and twenty minutes of dialogue. On the other hand, it is made clear how incredibly naïve and lacking in experience the prostitutes are, despite the worldly nature of their profession. Young Michael from New York dreams of being a gangster, despite having no idea what it entails. Libor explains that prostitution helps him with languages and several boys admit to gambling away the money that they otherwise say is valuable enough to sell their bodies for. The mix of fantasy and unrealistic expectations screams lack of guidance and education. This could be dismissed as typical teenage silliness, yet, these were not just rebel teenagers. This generation was the first to be free of the national isolation, travel restrictions, forced economic equality and state-controlled media that their parents grew up under. Such drastic and rapid changes must have had a pervasive effect on Czech society and it is probable that it played a significant role in leading many of the boys into prostitution. Following the ‘Velvet Revolution’ for example, Prague consistently experienced low employment rates and, overall, it was women and the young who were most at risk. Rural areas, like those the teenagers ran from, also suffered heavily throughout this decade. It is therefore somewhat disappointing that Grodecki avoided the ‘serious problems’ that forced troubled Mirek away from his family and that stopped Libor from returning to his, even when his mother offered to pay for his train ticket home.

An explanation for this could be Grodecki’s obsession with the influence of the West; something which can be seen in his dedication of much more air-time to the discussion of foreign clients, their requests and their behavior. This is where the conversation takes on a much more materialistic tone and the prostitutes confess to judging their clients by their shoes, their looks and their clothing in the process of selling their body. Again and again they talk about German, Austrian, Swiss and even English and American clients. We get the sense that prostitution is simply a tourist pastime, the consummation of human beings as an attraction. Furthermore, staged footage of leering, slimy-looking old men with gold jewellery and balding heads is added to the muddle of materialism and foreignness; usually after the revelation of particularly unpleasant details. In doing this, Grodecki exacerbates the sentiments of exploitation and perversion. Having admitted that, “homosexual prostitution became for me a metaphor for many other things”, the boys may well be considered a metaphor for Central and Eastern Europe as a whole – an orphan of socialism that is being corrupted and devoured by the privileged and powerful West. While the audience may be thinking of how the young boys should have the right to a proper youth in which they have time to grow and develop, Grodecki is reminding them that post-socialist societies are in need of the same. This is a moving notion, and while it does not do much to expose the socio-economic factors behind child prostitution in Prague, it does speak of the socio-economic situation of the Czech Republic as a whole.

While employment rates and standard working conditions do not capture the imagination of the Polish director, theft, sadomasochism, bestiality and AIDS most certainly do. Not Angels But Angels asserts the depth of crime, hedonism, sex and drugs in Prague in several ways, most importantly, through the provocative staging of the interviews. The boys answer questions on the edges of beds, in windowless rooms, bathtubs, and the arcades where they lose all of their money. Their faces are often lit dramatically, half in the light and half in the dark, with a cigarette in one hand and a drink in the other. This is not a typical depiction of youth. Rather, it is a spectacle constructed around the misery and suffering of others which associates the dark and the deviant with homosexual desire. Moreover, the behavior of the interviewees is inevitably performative, as if they cannot switch off from the character they play when attracting clients. The camera, too, is guilty of performing for the audience. When asked about AIDS, it zooms in tightly on the faces of the young men, as if to suggest that their fate is swiftly closing in on them. At this point, it is necessary to speculate whether the film itself is exploitative, in the quest for entertainment. At a time when society’s opinion of homosexuality was most likely distorted enough, is it fair to cut up and edit ideas of queerness in the name of drama?

However, accusations such as those from Kevin Moss, that Grodecki presents the workers as innocent straight boys who are corrupted by old, perverted homosexuals is unfair. He does not repress or omit their confessions of bi- and homosexuality. Nor does he exclude sassy and self-assured characters such as Miss Jackson, with his topless torso and long, curly hair and Radek, the blonde haired divorcee with strong opinions on the difference between bi-sexual and homosexual prostitution. These two young men possess a stronger sense of style that seems to reflect a certain independence as well as a more developed consciousness of their identities. Furthermore, while the staging of interviews in spaces that help to contain and hide the homosexual community from wider society is disappointing, it could possess some hidden value. In the arcade shots, there are often friends in the background or nearby and in the nightclub scenes we see everybody dancing and enjoying themselves together. This creates a sense of community and moral support between the characters that we see, which is an idea supported by statements that it is their friends that helped them to find work and make contacts. Perhaps places like Riviera club and T-club were more than client hotspots. Perhaps these were places where people could express parts of themselves that were not well-received in general society. Perhaps these were places where dancing, laughing and drinking relieved the pressure and struggle of day-to-day life. Perhaps the regulars were like family and formed crucial support networks for the struggling youth.

We will never know in this particular case and we can only hope that there were moments of beauty and agency in a life defined by submission to others. It is unfortunate that Wiktor Grodecki did not shine a stronger, more inquisitive light into such darkness. It is also a shame that his interventions brought an element of the circus to the scene of a crime. Nevertheless, Not Angels But Angels, is an undeniably fascinating, intimate and sympathetic portrayal of the lives of people who seem to have been otherwise forgotten.