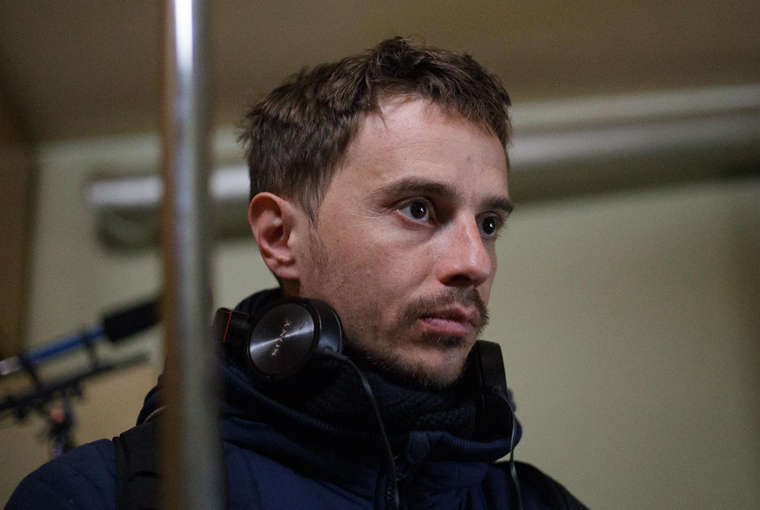 Gjorce Stavreski’s “The Secret Ingredient” screened in the Balkan Survey program at the 58th Thessaloniki IFF. Staverski discusses how he would situate himself within Balkan cinema, and what challenges he faced in making his film…

How did you come up with the idea for your film and why was it important to tell this particular story?

Well, it was quite strange to be honest. I had a script for a feature film that was written before this one and I thought that maybe it is not appropriate for a feature film. It was more like a drama and I thought maybe it’s too arthouse. I wasn’t satisfied and I said “okay, let’s do something that is more approachable, that could be more easily digested by various audiences”. It was really pragmatic at the beginning. And then I wrote a synopsis, which was actually also a family drama, and then we kind of got into some crisis. So I said, can we change this into a comedy?

The main motive/motor behind it all is poverty. I see it every day, on the streets, these last ten years the number of people begging literally skyrocketed. Also, our healthcare system just fell apart and people don’t have any solutions for their problems. They either go to some private hospital because they can afford it or they are left behind.

You have constructed a family drama but at the same time you are exposing the entire Macedonian society and what’s happening over there. It’s not the typical Balkan farce and you have your great anti-hero, who is a hero in some ways, a very nicely constructed character, the son, Vele. How did you come up with this character?

Well, to be honest, I think the filmmaking process was the same as the situation the character finds himself in, I was facing the same problems. Originally, the main character was supposed to be a young guy who is very good at school, with very good grades, and the other son who died was a mechanic, very similar to the father. That’s how the characters were in the original script. But then, when I found this guy during casting (Blagoj Veselinov) who is a marvelous actor, and he had this roughness and this natural talent, he looked as if he works in the depot himself, and then we switched the characters. We said OK, let’s kill the other one who was actually modeled according to myself. It just clicked.

There are recurring references in your film to homeopathy. Are you trying to make a statement about a growing reconnection to some kind of traditional medicine, a kind of superstition which exists in the Balkans?

I’m definitely sure that there is a return. I think that people are looking in that direction because the healthcare system fell apart, and people are really left behind. The anti-vaccine community is feeding stories that are circulating on the internet. I think that if people had a free and good healthcare system they would first go to a doctor. But nowadays I see the complete opposite, they will first go to some homeopath, some healer, and when the situation gets worse they try to find a way to go to some private hospital. That for me is insane. Many times, people are left on their own, I think that’s the main reason why there are so many people going to healers and homeopaths. But yesterday, I enjoyed the comment of a homeopath saying that he enjoyed the film, it was great!

I think we kind of look at a healer as someone who is a person of the people. But many people now ask me, for example, “do you believe in evolution?” Fuck yes, I believe in evolution. I’m kind of a science guy, I love that part of humanity and when I ask myself what about the people I know, what do they believe? I was astonished to find out that many do not believe in the theory of evolution. They believe in some conspiracy theory, some aliens that came to Earth and supposedly that’s how humanity was born. Less and less people are fans of science.

Can you tell me about the difficulties you faced in making this film? How was it funded? Last night you mentioned going to festivals, the East Meets West at Trieste International Film Festival. How was that experience?

To be honest, I made a conscious decision to take this standard route, let’s say, the co-production way of doing a film. Then, when the film went to the pitching forum of East Meets West, at first I didn’t know what to expect, to be honest. But it was a great success, the pitching was very nicely received, we were showered with compliments. People were trying to book a meeting, it was very nice. We got an award, an EAVE scholarship award and that’s how it all started. Even the shooting went really well and smooth, we didn’t have any overtime. The problems kind of started in post-production which was way too long because we had too much material. Because I am a control freak and perfectionist, we saw every frame of the film and we picked the best parts. We really dug into that material. It took 12 months, then we had some financing problems. At one point I was editing the sound myself in my bedroom, I was a hostage of the film! I think that yesterday the film finally let me go.

What is the most important part of a filmmaking process for you? Is it editing, pre-production? Where do you feel your vision comes alive and completes itself?

I really think that everything is important. Now, I can see people commenting on the script, for example, the dialog and the structure of the film, or they’re complimenting me about the casting. Also, the editing of the film makes me feel proud because we have a nice rhythm, I am very pleased with it. The final touches were very good, they were done in Greece, the color grading, the DCP master, including the sound mixing. I cannot pick only one thing, that this or that were the key moments or key ingredients.

Do you feel you are a Balkan filmmaker, that you belong to the Balkan cinema community?

Well, if I say I don’t then I will get stoned! You know what, even in Yugoslavia, the cinema of that country, we had the Black Wave in the 1960s which I really like. Some of the films are so nicely done, like Skupljači Perja (I Even Met Happy Gypsies, Aleksandar Petrović, 1967). That’s the legacy I want to refer to, not so much the over the top Balkan comedies, I really love subtle comedies. For example, I’ve seen two or three nice comedies coming from Bulgaria, like Urok (The Lesson, Kristina Grozeva and Petar Valchanov, 2014) and Iztochni Piesi (Eastern Plays, Kamen Kalev, 2009). They are subtle, really nicely done, nothing is over the top. I can connect with that. But at the same time, we have some films like, I don’t want to pick a fight here, but Parada (Parade, Srđan Dragojević, 2011), which in a way is not my cup of tea, a style of Balkan filmmaking which I cannot connect to easily. So, that’s the group of films that I want to belong to. I would say yes, that I definitely belong to Balkan cinema, but to this subtler side of the dark comedy. Of course, there are many dramas coming from the Balkans as well, and maybe my next film could be a straight drama.

Can I ask you about your other influences, then, beyond the Balkans, in terms of world cinema?

My number one inspiration is Italian Neorealism. I’m a hardcore fan of the films of De Sica, Rossellini and all those Italians who were struggling after WWII with hardship and humor. I also love the Dardenne brothers, the Coen brothers and their humor. I’m a mixed bag. I love genre film as well, like some good spy or crime movies, science fiction as well, European arthouse cinema. Not so much these artistic, intellectual kind of films for which you need some accompanying Derrida book. I really hate when people say to me to that I should read a book that is supposed to uncover the truth about a film. I like straightforward cinema and I want a film to speak to me without any symbols or metaphors. I believe that symbolism doesn’t work in cinema. That’s my world view.