“Hard to Start. Even Harder to Slow Down.” 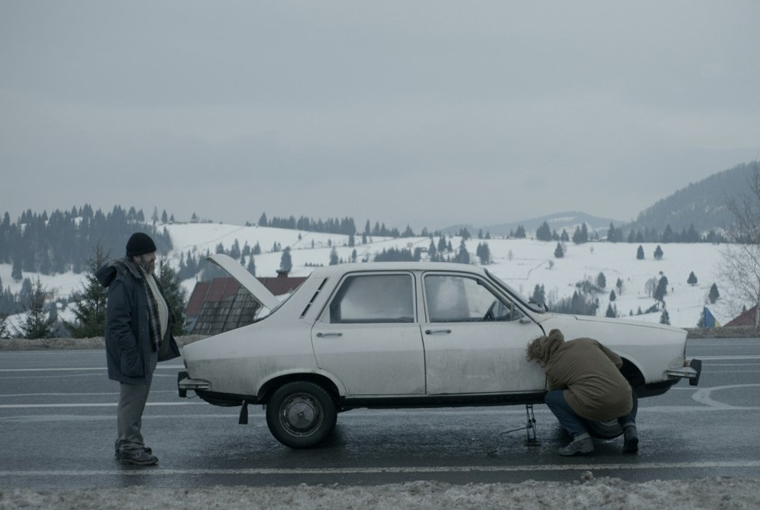 On a road trip from Transylvania to Moldova, Costi (Alexandru Potocean) travels with his father Sandu (Adrian Titieni) to a holiday home for a festive gathering. Their mode of transportation is Marita, a Dacia car that has seen their family through thick and thin. Now a hunk of junk with a broken gearshift and faulty windscreen wipers, Marita requires a lot of love and attention at every pit stop. But when she is on the road she has therapeutic powers, drawing fond memories from the driver and spreading joy to the passengers who listen to Sandu’s antics intently. In Marita’s absence, the family are left to deal with their emotional baggage within the domestic environment and it soon becomes clear that Costi and Sandu are no strangers to the complicated dynamics of a broken home.

The most distinctive element of Iftime’s feature has to be the way in which it is directed. The ambulatory conversations are meticulously written and the way they are performed by the cast is both painstaking and organic. Sandu’s substantial monologues, for example, are perfectly timed to mimic his stream of consciousness. This tempo, along with steady but not exactly regimented pausing, gives the dialog an improvisational feel. The words he says seem as if they were being thought of as he says them. Sandu’s stories repeatedly trail off into digressions – so much so that he has to ask his children to remind him where he left off. Sandu’s history is constructed entirely from information given about important off-screen events. Every time he reminisces, he builds upon his three dimensional characterisation. Charming, self-effacing and unapologetic, Sandu has a charismatic likability even when he bores his sons with his Soviet Union stamp collection and extramarital exploits as a younger man. And yet, not a single word appears excessive.

Free from the restriction of heavy editing, temporality is left unaltered within the extended duration of a shot. The arrow of time flows slow and steady, allowing the very minimalist events to unfold naturally as the actors endure the long takes. The filmmaker has opted for a straightforward form of presentation perhaps because of the inherent honesty that occurs with such a candid approach. The characters aren’t limited to narrative devices and instead their development for the audience relies entirely on their interactions with each other. In focusing on what they say rather than what they do, Iftime refrains from employing a kind of technically impressive cinematography. The majority of shots are static and restrained, allowing the eye of the spectator to keep an uninhibited focus on the furtive facial expressions and bodily gestures of the actors. This strictly naturalistic process of storytelling, in turn, accommodates a greater appreciation of their subtle and nuanced performances.

Apart from a few minor players, women are oddly absent from Marita. This may have been an intentional decision by the filmmaker in order to really dissect the relationships of the men. A social commentary runs through the film, presented by a patriarchal hierarchy between the male characters (in particular, the father, his sons and their nephew). To prove his alpha-male status over the others in the group, Bubu boasts of his sexual prowess, his high tolerance for alcohol and his old age (which is wrongly equated with wisdom). However, this rather archaic view of masculinity is challenged by Costi. After a drunken row at the dinner table, he accuses his father of being dishonorable for revealing a sexual conquest he had during his marriage, in his ex-wife’s very home. Bubu’s shameless, self-proclaimed adultery is momentarily surpassed by Costi’s integrity and emotional bravura. As a result, the power or ownership of the table is not handed down from father to son, but taken by force. Iftime’s moral standpoint calls into question the more traditional and outmoded forms of manliness and instead proves that intellectual and ethical varieties are the dominant ones. This is also the case with Costi’s younger brother who is the most submissive and stereotypical male figure of the extended family. Looked down upon, he is the butt of many jokes and his ignorance is often made fun of. In the morning after a party, he sips a warm beer to cure his hangover, encouraging the rest to do so. They refuse by telling him how fine they feel and he is amused and impressed by their strong constitutions. In the final scene of the film, however, it is Costi who sits in the driver’s seat. Steering his brother’s car, his brother and himself wherever he wishes, Costi has become the new man of the house. Whoever is behind the wheel has the power to choose his own destination and – by doing so – control his own destiny.

Part character study, part road movie, Marita paints a complex portrait of a typical Eastern European family. In mainstream cinema, family gatherings rarely go smoothly. Conversely, in Iftime’s debut feature, there are no scenes of hysteria or extreme dysfunction. The reunion is by no means painless or uncomfortable but a sense of maturity between the family members ensures they deal with their emotional apprehensiveness merely by talking to one another. In Marita, the drama is in the details.