Traveling into a Diachronic Greek Tragedy 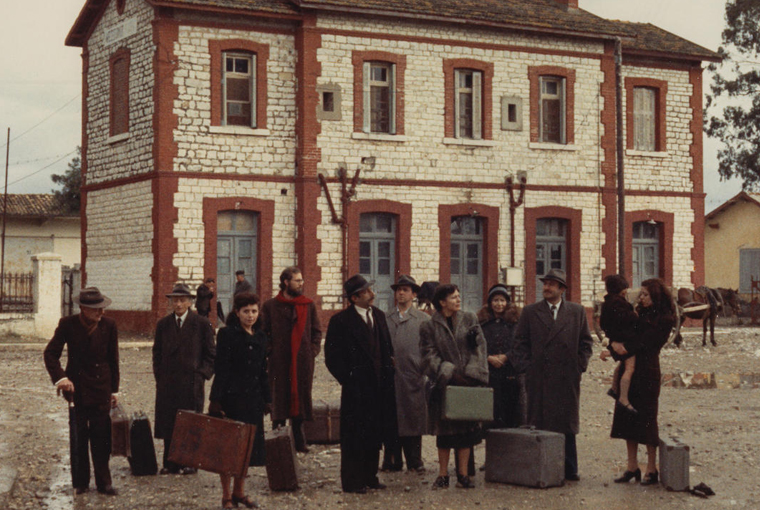 All of Angelopoulos’ films are narratives of a devastating political history, and of a unique cultural continuity. Each film can also be seen as an ethnography of the director’s country of origin, Greece. Greece’s political history and culture was already at the centre of his first film Reconstruction (1970), and Angelopoulos once called all of his work a “variation” on this film.1 But in The Travelling Players, the artist’s deep connection to his land and history is perhaps most strikingly revealed. In this film, Angelopoulos depicts two decades of Greek history (1936-1952) through the lives of a family of actors whose story is based on Aeschylus’s Oresteia (written around 450 B.C.). And while both narratives already overlap in the film, the most important story the film has to tell might be the political context in which it arose.

Travelling Players was shot in 1972 during the Regime of Colonels in Greece (1967-1974). Because of its political content, the film had to be done under very difficult circumstances. The fact that the film was actually completed has led many Greeks to consider it an act of political resistance. The film was only released in 1975, after the fall of the Greek Hounda and participated in the film festival of Thessaloniki in 1975. Upon its release, the film enjoyed immediate success, and was awarded the International Film Critics Award (FIPRESCI) in Cannes in (1975) among many other awards. The director intended to participate as part of Cannes’ official selection. However, due to the film’s strong political implications against supporters of the right wing party, the conservative Greek government of the time did not allow the film to participate.

Some critiques have speculated that the famous tavern scene was especially provocative for the post-Hounda government of 1975. The tavern scene takes place on New Years in 1945 just after the German Occupation ended in Greece. One of the main characters enters the tavern as a witness to the feast and to the political debate that is about to take place between supporters of the KKE (Communist Party) and the conservative right-wing party (filovasilikoi). The two groups try to overtrump one another with political songs. While the communists have the support of the band and thus seem in the lead, the conservatives win the fight when one of them takes out a pistol, and even though he only shoots in the air, it manages to scare away the communists. But this is not the end of the scene. After the communists leave, the all-male conservatives continue to party, dancing with each other to the tune of a patriotic waltz. This scene unveiled several truths the post-Hounda government would rather have kept in silence. First, it shows how the conservatives oppressed the communists after the war even though Greece’s liberation was largely their merit. It would have been unwise for the post-Hounda government that was mostly sympathetic to the post-war conservative party to let this version circulate throughout Europe. Second, the fact that the conservatives dance with each other must have felt humiliating for anyone with a conventional understandings of manhood.

Originally, Angelopoulos’ decision to embed his narrative in an ancient Greek tragedy was an effective means to escape censorship. But even if the political context of the seventies threatened artistic liberty of expression, this kind of oppression nevertheless resulted in the emergence of numerous works of art, many of which took recourse on elaborated forms of symbolism. The musical “To megalo mas tsirko” by composer Stavros Xarhakos, which uses explicit metaphors to suggest political resistance, would be another example for this.

Travelling Players is a story of a family of actors that travels around Greek provinces and cities presenting the pastoral folk drama “Golfo the Shepherdess” by Spyros Persiadis in order to make a living. The story begins and ends with the same picture shot at a train station of a small town called Aigio. The viewer follows the actors’ journey from the last year of Metaxa’s dictatorship (1936-1940), the Second World War and the German occupation, the Dekemvriana (1944) up until the Civil War period (1946-1949) and ends around the year 1952. The time of the narrative switches back and forth between these different periods.

In Travelling Players, narrative layers of myth, history and of the political turmoil of the time the film was made are so intertwined that it can only confuse people less acquainted with Greek history. Following the story for younger Greek people can be compared to a radically condensed History Lesson. Angelopoulos only vaguely guides us through the history through details and symbols. Right after the aforementioned tavern scene, the all-men conservatives can be seen walking drunk on the street. While one would normally suspect that they’d be walking home from the new year’s party that went on all night, they soon stumble into a crowd of people listening to Marchal Papagos’ pre-election speech in 1952 (Papagos won the election soon after). Only the posters portraying Papagos’ face and a few indications in his speech reveal that the time has changed.

While the viewer tries to make sense of the complicating historical context of the story, there is also the family story that unfolds. The history of Greece and the history of the players mingle. A careful reading of the film allows us to make all clear connections between the family story and the ancient Greek tragedy of Orestes who kills his mother Clytemnestra and her lover Aegisthus in order to avenge the killing of his father, Agamemnon. It is rather impressive that at some point, the tragedy that is taking place within the family can be compared to a national tragedy. The endless circle of violence that is at the core of the House of Atrides can easily be read into the two decades of Greek history depicted by Angelopoulos. However, the painful historical reality of Greece does not allow Angelopoulos to apply Aeschylus’ happy ending to his own version of the Oresteia. In the film Angelopoulos’ Orestes is finally executed by his Greek right wing opponents, whereas in the play he is legally discharged from his crimes and granted redemption by the Gods. This is a striking change. It might seem rather despairing as Angelopoulos, in opposition to Aeschylus, does not allow for the circle of violence to end.

Considering Greece’s continuous self-destructive history, this is perhaps a more realistic finale. In 1967, the tense times following the end of the civil war reached a peak, when the Regime of Colonels took over the power for seven years. The circle of violence was still present during all of these years and continued until the fall of the regime well into the seventies.

It should be noted that Angelopoulos’ decision to tell his story through repetitive uses of mise en abyme (the play within the movie), is not exclusively used as an expressive means. It bears a connection to his own experience of being a witness of the political events that repeated themselves as in a theatre. Tragedy aside, if one has to face the same reality over and over again, one inevitably feels as though watching a play. The film reflects this kind of feeling on an aesthetic level. The shots of the film are long and distant. The actors have small roles that reveal their insignificance as witnesses of the violence that is taking place around them. The shots also frame the scenes as if they were a stage: frontal, and still images, mostly shot from a distance. The viewer is “given” an action to watch and is left all alone to analyze and understand its implications.

Angelopoulos’ Travelling Players is a profoundly tragic portrait of the painful path that his country followed after the Second World War. “A Greece of Seferis rather than a Greece of Elytis” as the director says2 (Seferis poetry was more pessimistic than the glorious tone attributed to Elytis- it is filled with melancholy about the fate of his country). Travelling Players tried to show to the world a different kind of Greece, not one of sunshine and blue seas but one of “landscapes in the mist.” What distinguishes Angelopoulos from other Greek directors who have also manifested the turbulent history of the country through their work is emotion. The film draws emotion from the experiences of Angelopoulos’ family that was politically divided between left and right. Angelopoulos’ father escaped execution in the battle of Athenes (Dekemvriana in December 1944) which was a protest against British influence on local politics. Angelopoulos actually thought that his father died during the fight. He looked for his father’s body for days, until he found out that he survived the attacks and returned safe home.

Unfortunately Angelopoulos’ last film The Other Sea which looks at one more painful page in the book of Greece’s modern history was not completed due to his sudden death. Although everyone would have loved a film by Angelopoulos on Greece’s and Europe’s current state of affairs, I believe that the interpretation of both the context of the Travelling Players and the circumstances under which it was shot, can be as current in the present political and social context of the country. In times of political revolt and social unease, the following quote is urgent again: “The more I think about it the more I realize that back then things were different. We truly believed that we could, we believed “politically” that we could change things…” 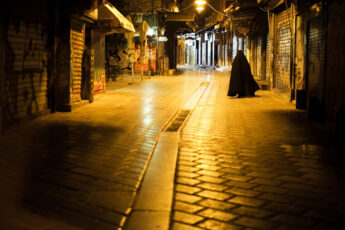