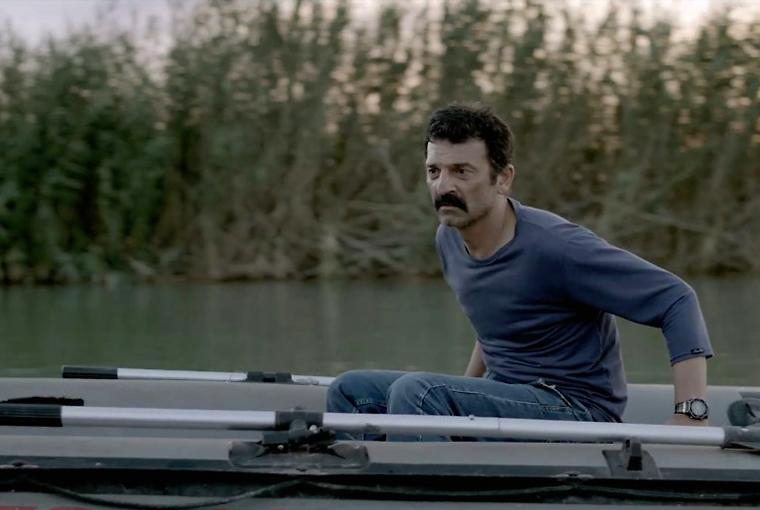 As a country whose footprint on the international film scene is notoriously small, it seems that Azerbaijan should look back at 2014 with contentment. Last year’s Cannes film festival featured the nation’s first-ever in-competition short on the Croisette, Sergey Pikalov’s The Last One, while Asif Rustamov’s and Elchin Musaoglu’s feature films screened in Karlovy Vary and Venice respectively. True, The Last One and Musaoglu’s Nabat were not entirely domestic productions (the latter starring a largely Iranian cast and crew, the former’s director, Pikalov, being Russian), but then what film is in today’s world of multinational coproductions and cooperations? Hardly any, one is inclined to agree, and plainly the percentage of Azerbaijani crew members working on domestic productions doesn’t even come near explaining how well Azerbaijan film is represented internationally. If this is evident, it’s not at all clear what does in fact make a film Azerbaijani, or French, or whatnot, for it’s most certainly not just its being (co-)produced by that country: production details are all about money and politics, not the aesthetic aspects we seem to associate with a film’s national origin. The question being why, if that is so, one should automatically take a rise in “Azerbaijani” productions as a sign of improvement of Azerbaijan’s cinema, and why, more generally, we spend so much time speaking about a film’s national origin to begin with?1

In Asif Rustamov’s Down the River, the issue of “Azerbaijaniness” is especially pressing because it is tacitly raised by the director himself. The film revolves around a rowing coach of Azerbaijan’s U-something national team (flags and emblems abide), who is furthermore constantly drawn between staying in Azerbaijan with his family and leaving to start a new life abroad, with his Polish lover. Ali tells his girlfriend that his son, Rustam, keeps him from leaving (as opposed to his wife, with whom he has a frosty relationship indeed), which is at times difficult to buy because of the way he treats him. Rustam is in the rowing team Ali is coaching, and during training sessions, it’s him who is picked out for not keeping up the pace – Ali even scolds Rustam for calling him “dad” in front of his teammates. Then, an important race comes up – importance apparently being communicable, in Azerbaijan as elsewhere, through the presence of pot-bellied men in suits -, and Ali puts Rustam off the team at the last minute because he “can’t take risks” (referring to Rustam’s performance). Humiliated, Rustam runs off and disappears after taking a dip in the river with his friends, putting Ali’s integrity to a final test. Any true patriot like Ali at some point faces the dilemma of having to choose between his desires (leaving) and duties (staying).

Or so we are told. With the dilemma put this simplistically, Ali’s identity crisis is predestined. At first calm and in denial, he is gradually forced to accept and deal with the fact that his son has disappeared; in one scene, he skims the riverbank with stoic determination, in the next one, we see him nearly hit his wife when rightly accused of infidelity. Which doesn’t really shock us because Ali comes off like a jerk from beginning to end. Perhaps more striking is the fact that his supposed transformation – the film’s narrative spine – is one of tone and gradation, not of quality. Stuck in semantic limbo, Rustamov returns to the same themes and conversations time and again, using every overworked trick of the craft to construct a character portrait by contrasting routine with adventure, ambition with happiness, desire with duty. A face-to-face meeting between Ali’s wife and lover is particularly painful proof of Rustamov’s unimaginativeness, as the lover’s assertion that she will at last be able to make Ali happy is countered by the wife’s derisive reply that she doesn’t know Ali at all. I don’t even want to conjecture where Rustamov got that from.

Fortunately, Down the River does get on track at some point by investing us in Rustam’s disappearance, though not for long. His tragic fate, like many a wisdom about Azerbaijan, life, and women, is revealed by an old man during a ridiculously pathetic dialog with Ali in yet another riverbank scene. The remaining twenty minutes of the film are an attempt to end the story in similar vein, i.e. through metaphors whose explicitness resembles that of a director’s commentary: Ali sits by the water and reddens his mouth with fruits – his inverse washing his hands from blame (I’ll spare you the non-symbolical justification for this scene, it’s ridiculous) -, and is then shown celebrating the victory of his rowing team one year later. (Some people never seem to learn.) Sounds good, works poorly.

Clearly, there is many a good film which centers around an obstinate character whose wickedness remains unchanged in spite of everything, and a case is to be made that nothing is a priori wrong with the way Down the River is structured (except, perhaps, for the clichee-inspired dialogues and twists). Had the script-doctoring and acting performances been better, surely Down the River would have been a decent European film! Which is precisely the issue. One can’t expect Azerbaijan to come up with a film culture out of nowhere, and there is most certainly no point in going about randomly criticizing its attempts to establish one. I just don’t think that Down the River, The Last One or Nabat are really attempts in that direction. On the contrary, they comply with those arthouse dogmas that will secure them a spot in the A-festivals but ultimately strip them of their national identity.

That Down the River is a prime example for this odd dialectic is particularly ironic because it constantly boasts of its national origin. In fact, it is almost xenophobic. Not only is Ali’s Polish lover involved in breaking up their family, it is furthermore tourists who are responsible for Rustam’s disappearance because of their ruthless jet skiing, which also harms a local fisherman. Yet, for all its nationalist sentiments and symbols, the story doesn’t even hint at what could constitute “Azerbaijaniness”. The way it depicts family life, marriage, institutions, ambition, desires, grief, death, conflict, mourning are perfectly compatible with a Western viewer’s conception of those things. More than that, its minimalist aesthetics, wide-lense cinematography, problem-oriented narrative and obsession with motif (water/the river) are paradigmatic features of European cinematic conventions.

Analogously, Nabat is a film that nominally deals with an enormously specific, regional problem – the Nagorny Karabakh conflict between Armenia and Azerbaijan -, but ends up being culturally neutral because of its “highly individualized story-line [as in focusing on a single character], the indistinct setting, as well as the overly artsy cinematography”. As Moritz Pfeifer goes on in his review for this journal, Musaoglu’s Nabat might as well have been set in Yugoslavia. A look at the trailer of The Last One should hint at why that film is at least as bad with regard to its lack of cultural identity.

Which is not true of films like Elcin Musaoglu’s earlier The 40th door (2009) or Elvin Adigozel and Ru Hasanov’s Chameleon (2013), neither of which are free of their technical flaws (especially as far as acting is concerned), but both of which point to issues that really seem to trouble Azerbaijan nowadays and which, by extension, visualize Azerbaijan’s cultural heritage: the neglected role of tradition; clashes between the old and the young and their values; the price of prosperity in a corrupt society etc. etc. The 40th door or Chameleon aren’t better films as far as formal criteria are concerned, but they are as far as everything else is concerned – they are good not in virtue of what one learns in film school, but of what one does not, favoring meaning over content, form over style.

That 2014’s above-mentioned flicks have been advertised as big Azerbaijani successes only proves that we have gotten to a point where the distinctive criterion of your ordinary festival film has become its de-facto origin. That ignores the fact that we rarely ask what in fact constitutes a film’s national identity. If production credits do determine a film’s national origin, then we shouldn’t read too much into them. If national denominations mean more than that, then Down the River, The Last One and Nabat aren’t all that Azerbaijani. Either way, 2014 may not have been such a good year for the country’s cinema after all.

1.
If you think I am pointing out the obvious, try consulting any European film portal and count the times that reviews and film news cite national denominations. Journalists take them seriously, so seriously that they often insert them to justify a film’s idiosyncrasy. Which last part seems especially problematic, for how can a film’s being from a given country make it idiosyncratic in a non-trivial sense?