Searching for the Meaning of Life in a Carpet Store 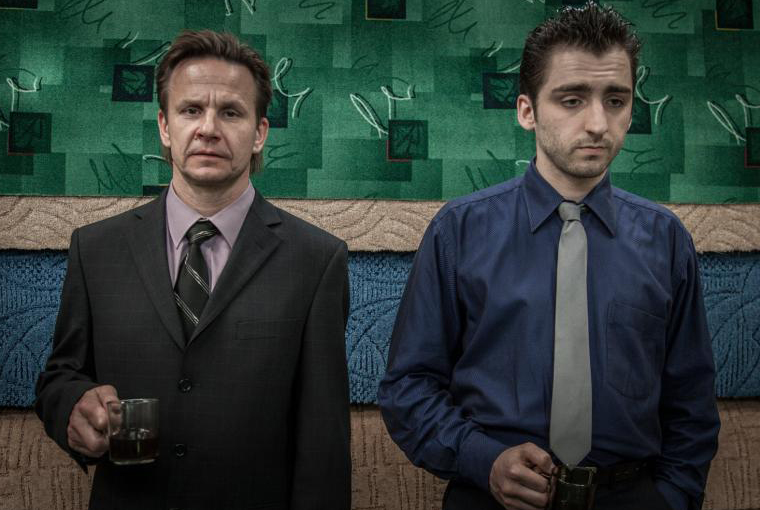 Resignation, rejection and retirement. So begins the story of Grzegorz Jaroszuk’s debut black comedy Kebab & Horoscope, not with new starts but old endings. The plot immediately confronts issues of misfortune in a humorous debunking of superstition as the narrative details a horoscope writer and kebab shop chef after they lose their jobs. Fate brought them together, the chef quitting his profession after taking the advice he had read from an animal lover’s magazine to heart. The article, which was written under a mystical pseudonym by none other than the stranger sitting beside him in the restaurant, suggests his star sign should actively enforce big changes in his life. Chewing morosely on a kebab, the dazed writer confesses it was by his own hand in a publication from which he has just recently been fired. Desperate and with very few alternative options or qualifications left, these two partners decide to reinvent their careers as marketing specialists in the hope that they can improve the sales and work ethic of a slowly dying, independently run, local carpet store. Upon arrival, however, it is clear that the constituents of the shop are experiencing their own existential crisis and what unfolds is an absurdly bleak conclusion of an already meaningless period of their lives.

The clueless band of oddballs we encounter at the store are made to undergo a series of new age “parapsychological skill” exercises such as team meditation in order to engage with their own “inner ecosystems”. These kinds of sessions are punctuated by “stages” in which the marketing couple deem it necessary to enumerate their progress regardless of the team’s success or failure. At one point, in a foolhardy attempt to boost office morale, the shop owner purchases a meager looking goldfish bowl whose inhabitants are named after The Beatles. There is no employer/employee hierarchy at the store as every member is as incompetent and as inexperienced as any other, exemplifying the sense of the blind leading the blind. The parodist nature of the team building exercises only further prove the obvious futility of the small business enterprise, which cannot be salvaged and is beyond repair.

There is a clear struggle apparent in the relationship between old and new forms of industry in Kebab & Horoscope. While the marketing specialists wish to pump young blood into the carpet store with their teachings, the shop’s owner remains a symbol of an outmoded business model who never ceases to get in the way. His ambition and purpose require empirical evidence and so he favors old fashioned, analogue methods of advertising as they possess a certain craftsmanship and physical proof of hard work. His ideology is symptomatic of equating salesmanship with masculinity, whereby his weakness as a businessman is overcompensated for by the presence of manly objects and actions. For example, he is often holding gym weights or mechanical tools during office meetings or counting pushups on the rooftop after he is humiliated and belittled for the lack of profit the shop has seen. The bravura of these items, however, is completely disarmed anyway by the salmon pink and baby blue colored shirts that he wears. Instead, his character represents the death of the traditional workplace dynamic of which, ironically, he is constantly reminded by his blaming peers.

Much of the black comedy stems from the dialogue between a mother and daughter who interact as if they were talking to strangers rather than loved ones. The mother, who is currently living with her daughter, embarks on a search to find her long lost lover. She informs her child of her plight being married to a husband she never loved and laments becoming a mother herself. She delivers her revelation with such deadpan conviction and brashness that the heartlessness of their conversation is softened by her daughter’s nonplussed attitude. Bewildered and apathetic, the child submits to her mother’s demands of needing a place to stay and a helping hand in the investigation into her past romances, regardless of the ordeal’s negative impact on her very existence. The dialogue itself is performed like a business deal, a kind of exchange that is needed but remains absent from the carpet store. With the knowledge the lover is now in fact a school teacher – an actual signifier of real learning and education – the mother pleads hysterically for emotional support from her daughter. And of course, it seems the mother is denied a shoulder to cry on simply because that type of behavior is not professional enough for the daughter to understand. Notably, this sense of detachment is best utilized in scenes involving failed suicide attempts. The stupidity with which these people try to kill themselves include: supergluing their heads to the bottom of the bathtub so they drown and exposing themselves to a number of sad facial expressions (thus reminding themselves of how depressed they are) so that they can convince themselves of wanting to die.

If there is any imbalance in Jaroszuk’s otherwise banally realistic film, it is unequal representation of men and women. The male characters are made up of dim-witted sales assistants, emasculated shop owners, perverted old men or suicidal tourists. The female characters, on the other hand, are considerably stronger in comparison. The mother manipulates and lies to her lover, the daughter gains some sense of independence from her mother and is the only worker who is capable of selling a carpet. In particular, the cashier spends her screen time as a contrarian towards her male peers and she has control over the money (and therefore power). Arguably, the majority of women described here appear to be mean-spirited and quite rightly so. I have yet to mention the woman from an internet dating website who plots to murder her Asian boyfriend, and even the daughter entices and flirts openly with her married co-worker. At the risk of simplifying Kebab & Horoscope – a flaw it realizes all by itself -, in Jaroszuk’s world you can either be weak and good-willed or strong and reprehensible. But, that would be a far more serious reading of the film than the rather insincere tone would expect of its audience. All these comfortably numb characters do share a lackluster want: to legitimize their purpose in life. The nihilistic ending of the film, as the shop is inexorably forced to close, suggests this teleological conundrum is solved only for a fleeting moment. It is here that Jaroszuk illustrates one certainty: that progression doesn’t necessarily mean progress. 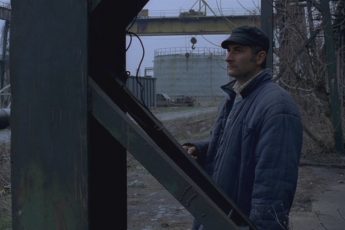 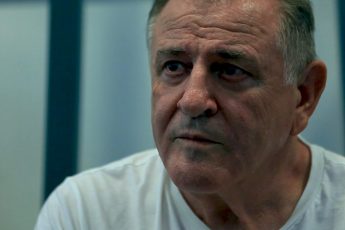