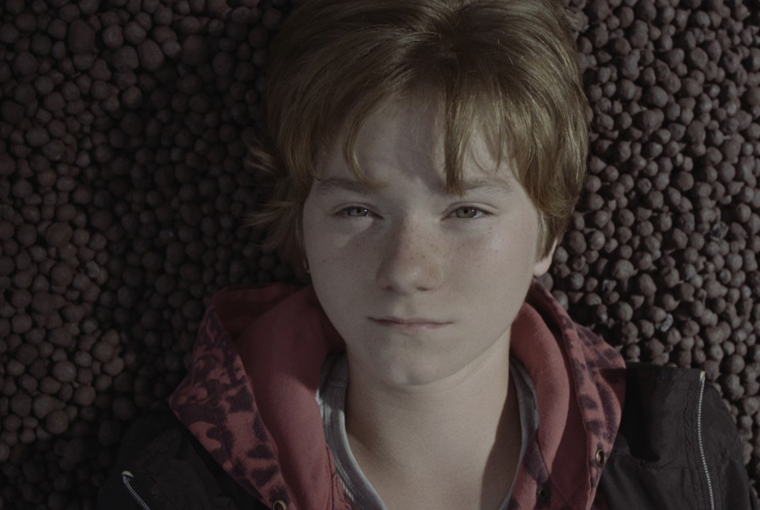 It is only when you spend time closely following the festival circuit that you realize how peripheral a phenomenon the classical coming-of-age story is within the sphere of commercial cinema. The discrepancy is especially striking when you turn your attention towards small national cinemas where the proportions are relatively transparent. In Slovakia, which produces only around ten feature films per year (not counting minority co-productions), three non-commercial coming-of-age films were released in 2017 only: Iveta Grófová’s Little Harbour about a group of underprivileged and neglected children; Tereza Nvotová’s Filthy, which pairs the process of growing up with the grave issue of rape; and Nina, Juraj Lehotský’s portrait of a young girl stuck in the middle of a divorce. All three films were produced with public backing, and all three traveled internationally before their release in domestic theaters. The small commercial segment of Slovakian cinema, on the other hand, was largely split between thrillers and comedies, its only depiction of the non-adult world coming in the form of a musical fairy-tale that addressed pre-teen viewers and their parents.

It is tempting to trace back this imparity to the fact that coming-of-age stories typically revolve around a character who is exposed and vulnerable. Indeed, within the confines of the genre, it is at best as a result of a formative process that estranged and lonely teens find a path towards reconciliation. Still, a protagonist’s lack of coolness can only minimally account for the unpopularity of coming-of-age stories when there are so many blockbuster films that revolve around a similar kind of personal growth. Fifty Shades of Grey is just one of many movies centering around insecure and shy women who are, either through the intervention of a handsome prince, or the realization that they themselves are in fact very attractive, elevated to a position of popularity and success. In a society where women are systematically underprivileged and discriminated against, films promise liberation through cathartic validation (the hypocrisy of which is perfectly embodied in the external character of that liberation in Grey).

The characteristic that seems much more decisive in scaring off commercial producers, then, is the reliance of coming-of-age stories on emotions rather than actions. Though any grave change in cinema reveals itself in its characters’ slices of life, coming-of-age stories focus on a kind of inner growth that is primarily communicated through dialog, atmosphere, and body language. Arguably, it is this preoccupation with and reliance on introspection that makes coming-of-age stories incompatible with our public consciousness. For while the story of an unpopular girl in college who joins the “cool girls” is in itself uplifting, that same story could be deemed intrusive and potentially displeasing when told from a position of genuine vulnerability. It is one thing to have a Hollywood star take off her rim glasses and nonstandard make-up and “reveal” that she is attractive, and another to link the struggle to fit in with fears and alienation. (To balance such negative cues and incorporate some additional suspense and action, many contemporary coming-of-age stories that do originate in the commercial sector incorporate a narrative layer foreign to the genre, e.g. by picking up a comic book theme, like Spiderman Homecoming, or by bringing in an entirely different genre, like It, which is part horror film and part coming-of-age story.)

Though it would be beautiful indeed if all it took to counter commercial disinterest were readiness to face the facts, the story of non-commercial coming-of-age stories is not a story of success. Juraj Lehotský’s Nina is only the latest addition to a long list of films that tackle this difficult genre without being able to exact anything beyond empathy – even if it tries hard and its intentions seem good. Nina’s eponymous hero (Bibiana Nováková) is a young girl who is trying hard to navigate her life through the aftershocks of her parents’ divorce. Her passion is swimming, a sport which allows her to excel and, perhaps as importantly, drown her frustrations. Nina’s problems not only originate with her difficult personal situation, but also in school, where her grades are stagnating at worryingly low levels. These two sources of frustration are intertwined when Nina’s mom (Petra Fornayová) warns Nina she’ll stop paying her swimming lessons if her grades don’t get better. While her youthful father (Robert Roth) appears more understanding – when he’s invited to school to talk about his job, he makes everyone laugh with a convincing rock song performance –, he’s not interested in risking his visiting rights for her stubbornness. But the latter, as in many coming-of-age stories, proves to be a powerful and ultimately unassailable source of power. Nina, we learn, is in possession of her life in the minimal sense that she carries her own body, which is a great bargaining chip vis-à-vis parents who care (if to an insufficient degree).

Like many contemporary filmmakers from Slovakia, Lehotský has a background in documentary filmmaking, which lends the film a reserved and observational touch. Shot on location with many outdoor scenes, one gets a good feel for the anonymous cityscape that serves as the film’s aesthetic backdrop. Without doubt, atmosphere is a major driving force of this film. Though Nina’s story would suggest otherwise, the film shuns strong altercations, mostly progressing through mini-sequences that might almost have worked as freeze frames. The drama only enters over time as Lehotský advances some sort of climax, which is when the film finally leaves behind its near-photographic immobility with an act of despair.

Nina’s straightforward, middle class narrative is complicated somewhat by the fact that Nina’s parents not only stand at opposite sides of a divorce, but also represent different social strata. Nina’s mother, a former dancer, lives in the kind of flat the standard viewer of Lehotský’s film will be familiar with: neither big nor posh, it is carefully furnished and carries a recognizable IKEA ring. Her new boyfriend is “an Austrian” (Josef Kleindienst) who essentially figures as that – the foreigner who arrives on a motorcycle and cuddles with Mom. The interesting part is Nina’s father though, a construction worker who works nights shifts and lives on the periphery. Curiously, in spite of his theoretically precarious standing, dad seems able to do just about everything save for Nina’s homework. With his Mick Jagger look, he levitates through every situation, however awkward or problematic, paints his daughter’s room in the color of her choosing, films her swimming competitions, and is “there” for poor Nina when Mom is being uncomprehending again.

Though it is laudable to try and address the division of Slovak society in a story about the generation that will have to deal with it, Lehotský’s superficial engagement with the working class downplays its woes. Because Lehotský’s film is composed of short scenes and sequences (often below 2 minutes), his brush strokes are very coarse and don’t lend attention to detail. If you have two minutes to address the affection between daughter and father, you can’t also hint at his worries, especially not when her struggles constitute the genre within which you’re operating. As a result, when all the troubles that do arise between father and daughter relate to his personal idiosyncrasies (rather than to his economic situation), it is suggested that nothing is wrong with his life. What was supposed to be a gesture of alarm thus turns into one of calm, which symbolizes the issue with Lehotský’s film as a whole. With no attention to detail, Lehotský remains fixated on the general narrative and thus neglects that residual incommunicability that haunts even those major conflicts we think we resolved. In the end, Nina’s entrapment turns out to be like the rim glasses from the Hollywood film – a gimmick that is only there to later be disposed of.