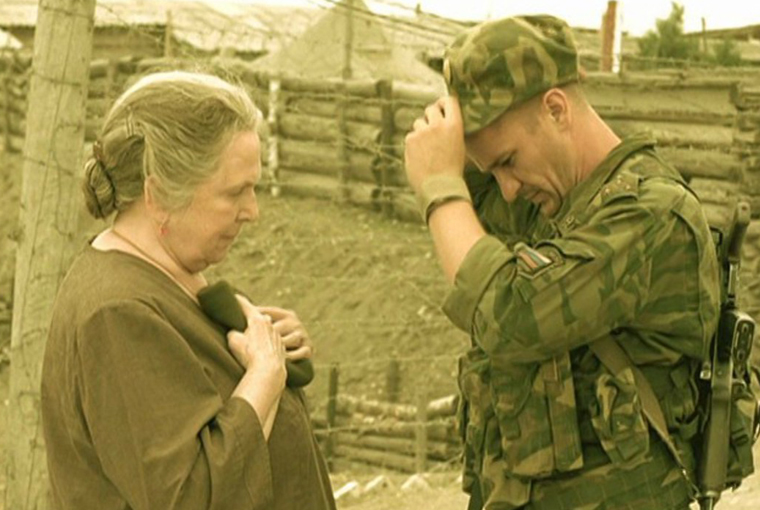 In Alexandra, we accompany an old woman on a visit to her grandson at a Russian army base in Chechnya during the second Chechnian war. The woman is played by Galina Vishnevskaya, the well-known Russian opera singer, whose first film this is. The war is in interminable continuation. The film does not, as one might expect, instruct the viewer on the horrors of war, bloodshed, pain and sacrifice. As Sokurov stated on the release of the film: “There is no poetry in war, no beauty, and it should never be filmed poetically. It is a horror that cannot be expressed, human degradation that cannot be expressed.” Sokurov’s film explores the calm before the storm, the moments in which everything might change, but most often does not.

It is the portrait of one Russian babushka’s journey to a place where she clearly does not belong. The first images show a stark contrast between Alexandra and the harsh reality of the camp. Her clothes, clean and silky-looking, her large breasts underneath her loose top, her long skirt, her abundant jewellery, her poise and her smile and the playful way she waves her hands while sitting at the front of the tank on the way to the base all contrast with the heavy, khaki uniforms of the soldiers and their alternately grim and fearful faces. A Russian widow from St Petersburg, she might easily have been unwelcome in a place of such hardship and brutality, but she is at first tolerated in this place of war. In the first few scenes Alexandra’s simple female delicacy against a background of stark masculinity creates a tension, a fear for the old woman’s person, a fear of violation. This is highlighted when she travels with the soldiers on the overnight train and then the tank. But soon we realize that what these men need from a woman is much more than carnal gratification. Many of the younger soldiers stare hungrily at her, but their hunger is not desire; it is rather that they are willing her to share their hopes. Indeed, by placing an aged woman in this role the question is no longer sexual. The soldiers are living at the level of basic animal instincts; human relationships are only about killing or reproduction. Alexandra’s visit changes the dynamic ; they are surprised. What is left for them to consider but ideas, knowledge which brings them away from this animal need to fight.

Alexandra’s presence is very powerful and very small; she chats and kids around with the soldiers and takes no nonsense from them. She wanders through the camp slowly like an aged guardian angel and is the grandmother to all the men in the camp, a Russian grandmother. The story has no climax, it is only the story of an old woman who brings a new point of view to the soldiers, and her presence is troubling.

Early in the film, her grandson takes her inside a tank. She picks up a large gun, her grandson offers to take it from her but she wants to hold it. She comments on how easy it is to shoot, and fascination lights up her eyes. But soon the moment is gone. Even angels can play with weapons, but in the end they know when to pull back from the game.On the second day of her visit, Alexandra boldly leaves the camp to visit the local market, trotting along on her arthritic legs, through the heat and dust of an unknown place. She offers to buy cake and cigarettes for the soldiers on guard at the entry. On her walk, she quickly becomes fatigued and sits down with a female stall-holder of a similar age. They chat together and watch the local boys and the Russian soldiers provoking each other. They exchange a look and one of them comments “they think they are men but they are just boys”. Grandmothers understand things that cocky young men don’t yet understand. Living on the edge doesn’t necessarily make you wiser about the human condition. The friendship which develops between Alexandra and the stallholder is remarkable in its swiftness. She is soon invited to drink tea at her new friend’s house, which is “just around the corner”. The apartment buildings are falling down from bombings and neglect. The strong female friendship remains till Alexandra departs and it overcomes barriers which might have been created due to difference in political opinion.

Alexandra illustrates wisdoms in the face of war. As with our heroine, this wisdom is often a female’s burden. Alexandra is dazzled by the hope on the young men’s faces; she is even slightly seduced by the power of holding a gun in her warm hands. But she sees both sides of the argument; the death of any grandchild is dreadful, no matter which side he is on. She supplicates her grandson to marry, and thereby, in her own small way, tries to promote peace. But Alexandra has no illusions. She is a warrior herself and knows the inevitability of war when minds are set and human beings are caught up in the tangled web that is rank, order and group. She knows that her time is not far off, a time when she will find peace from this life of war. This visit she has made, the way she shared her femininity and her softness with these brave men, some of whom will join her in death well before their time, will be one of her final great acts. War is always devastating, but war without resolution is tragic. Sometimes all an individual can do when faced with an affliction like war is to share a little kindness. 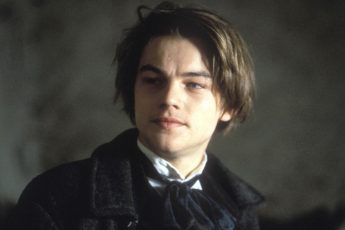 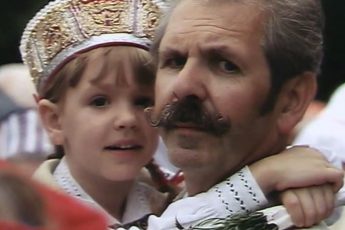 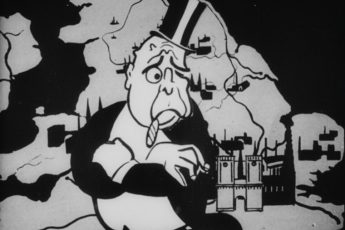