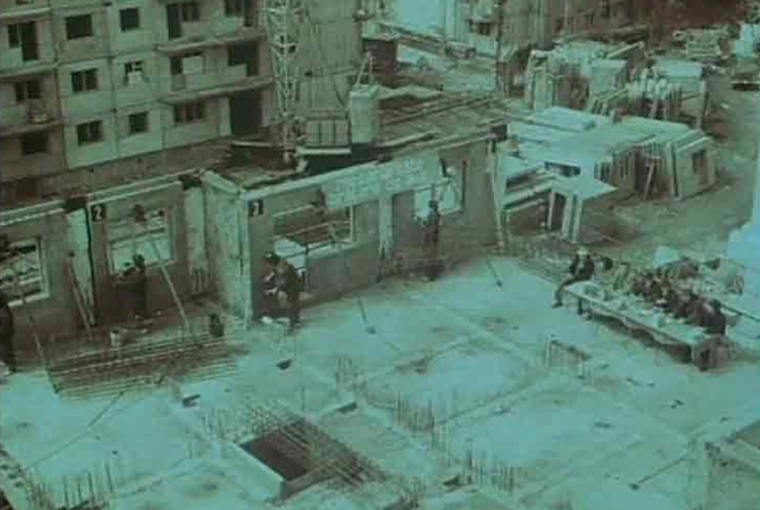 Sabina Pop, born in 1954 in Bucharest, is a filmmaker of the Romanian Documentary New Wave. She made films from the late seventies until the early two-thousands. Her films, presented in a straightforward style, concentrate on people and what they say about themselves..

Under the regime of Nicolae Ceauşescu a program of urban development was imposed. Both of these films deal with this program of ‘systematization’ which was invented to revolutionize the landscape of Romania, replacing rural towns with industrialized cities and aiming to double the number of Romanian cities by 1990. The first film gives aspects of the lives of those who built the modernist, multi-story apartment blocks which were destined to appear throughout the country. The second exposes the cultural activities of community members living in a small mountain village called Panc.

Ceauşescu and his followers wanted to build a utopian society, and films were part of the state’s propaganda. Pop’s films would usually be considered ‘documentaries’ although the definition of documentary is rather unclear in this case. Adina Bradeanu, documentary researcher at the University of Westminster, pointed out recently that one question essential to documentaries made during this time is, “How does one document a utopia?”. Assuming utopia exists, one might think that film is one of the most reliable and modern means of documentation.

John, how’s the construction site?, is a documentary based on the portrait of a young couple, Ion and Ioana. As its title suggests, the film concentrates on Ion, who is working on building city blocks under the communist regime. This documentary is a straightforward promotion of the housing project, its title reminiscent of an instructive school story : designed to educate. Interviews are interwoven with clever medleys of domestic life; women cleaning their faces in bathrooms where they have been sleeping, all crammed together in a small space. The men outside, building. In one scene we have a bird’s eye view of the building committee sitting on the roof of an unfinished building. The interviewees are compliant in their responses, they repeat how they have to work hard. The music which serves as a constant drone of background sound is triumphant. Like in Panc, the heavy drums which prevail give the idea of a march.

The last scene is especially memorable. The camera zooms from the interior of a new apartment to the window of the building; a window covered in concrete dust. Hands start cleaning this window and soon a young man and woman come into focus. They pause, their hands at the same place on opposite sides of the glass, and they sweep their hands across in unison, the man’s smiling face revealed through the concrete. The cloying tone of this moment would be laughable if it weren’t for its strange reality. What is essentially a housing project, the poorest places in most European cities, is utter bliss for this young couple. As the camera zooms away from the window and we are presented with a massive empty building with all the windows covered in concrete dust, it really hits home how for some people watching the film at the time, the prospect of moving into one of these buildings would have appeared fabulous.

Panc is a small village located in the West of Romania, the closest city is Timisoara, about 130 kilometres to the west. Lost in the centre of the country, it had however been picked out by Ceauşescu’s government as a village to be abandoned. With under a thousand inhabitants it was considered ‘irrational’ with regard to national urban planning. However, the regime ended before the plan was carried out, and the village still exists. Sabina Pop’s twenty minute documentary Panc tells the stories of some of the inhabitants of this village. On the surface, this is a very light film, so simple it could almost qualify as a very well-made home movie. We see the teacher at the local school, who explains the lives of the children : what they do at school, their work at the farm after school. Innocent enough. Soon we are introduced to the idea that a few of them decided to get together a theatre troupe. We see the travels of this group and their journey to the local big town to try their luck at national fame. We watch one lady doing her make-up for the show. She is drawing black lines into her many wrinkles and her grey hair is covered by a shawl. She is telling us about her life “At twenty-four I had already buried my husband and my first child… life has been hard” She is thirty years old.

The film never presents village life as being carefree. In the people’s words we hear themes which echo the film John, how’s the construction site?. « We work hard, it isn’t easy… ». The way in which these statements are presented could hardly be considered blasphemy, we see that these are hard-working people, they seem to be contributing to the state. But the censurers clearly weren’t worried about the details of the film. We don’t know why exactly this film was banned – it probably originated as a simple documentary project about villagers that were doing theatre. Systematization involved the destruction of smaller villages; usually they were emptied and totally destroyed, doomed to become faceless industrial places with grey, identical buildings. To make this possible, they needed the villagers to remain faceless as well. The ones we see in this short film have strong personalities, and they love the theatre. We see them going into a market and performing on a home-made stage – making the locals laugh with their antics.

Panc was rediscovered in 1990, long lost after being censored and then forbidden sometime during the eighties. With images of an old-fashioned village caught in the middle of modern society, it recalls the recent portrayal of the Jurici people living in Macedonia from Teona Mitevska’s 2012 film The Woman Who Brushed Off Her Tears. The market scene features women in long dresses with flowery headscarves, and men in broad-rimmed hats, their skin withered and wrinkled by the harsh weather. One remarkable scene shows a woman walking in a field. She holds a canvas bag – she is sowing seeds. Two young children follow her, climbing and stumbling while dragging along a large canvas sack to cover her trail.

Utopia comes from ancient Greek, meaning no place. Sabina Pop’s films aren’t radical but well-made, simple and clear. John, how’s the construction site? illustrates how scale is a concept deeply entrenched in the idea of utopia. A roof over your head in exchange for your freedom may seem to be an obvious choice to those in need of shelter, while more subtle to those of us watching today. And while utopia probably can’t exist in real life, it can certainly exist in the theatre. As one of the women in Panc states, “theatre has been my shield in life”. If utopia is nowhere, it can’t be documented. But somewhere in the fine line between documentary and fiction, between reality and ideas, utopia emerged. 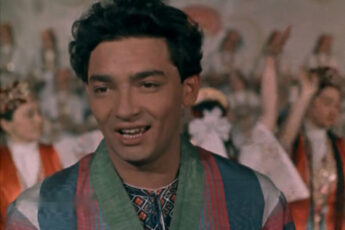 Soviet Politics and the Musicals of Tajikistan