Bad Boys in the Seminary 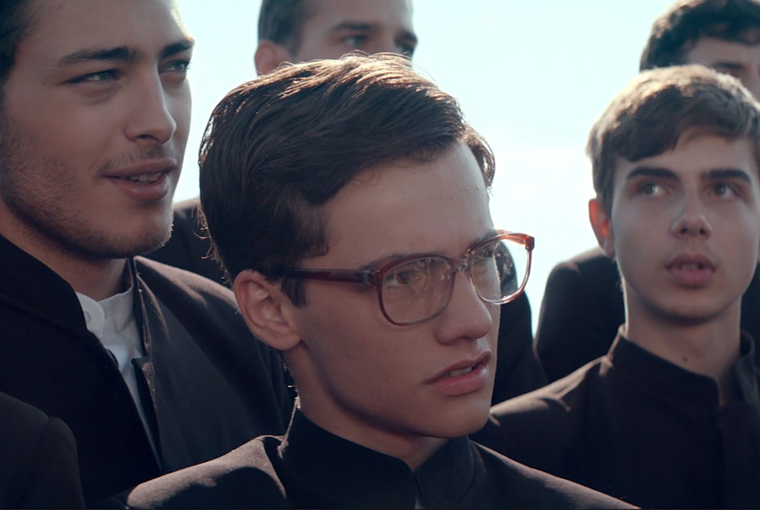 Following the time honored coming of age format, a group of young teenage boys enter a seminary in 1990s Romania, ready to be trained for priesthood whether they like it or not. At first, new boy Gabi (Ştefan Iancu) lives up to the stereotype of the class geek – earnest, rule abiding and skittish. Of the incoming cohort, he is also the one that demonstrates the most religious awe, asking heartfelt theological questions in class and gingerly exploring the contemplative spaces of the institution when no one else is around. However, after being betrayed by the priest Father Ivan (the prolific Vlad Ivanov) who manipulates him into getting one of his classmates expelled, his attitude begins to shift and he opens up to the influence of the bad boy senior students, led by Olah (Ilie Dumitrescu Jr.). In a definitive moment of transformation, he takes off his glasses (the male equivalent of taking your hair out of a ponytail – in something of an expositional oversight, no explanation is ever provided as to how his sight was magically restored) and is reborn a young man against the system.

From this point on, the narrative arcs of the main protagonist and antagonist are set. Gabi establishes himself as the lead rebel, skipping class to drink and break his vows of chastity. At the same time, Father Ivan’s grasp over the school and its pupils grows ever stronger, especially after orchestrating a coup against the headmaster and having himself installed in his place. Delighting in his own micro-scale tyranny, he embroils the boys in mind games, pitting them against each other and extorting written denunciations out of them, which he stores up for future use. One by one, Gabi’s circle of friends gets kicked out of future priesthood and sent back to secular life, first inspiring even more excessive recklessness but ultimately driving Gabi to come up with a plan to restore some kind of order.

While One Step Behind the Seraphim doesn’t quite justify its 147 minute run time, neither does it get boring at any point. Although the classical development of the plot and the archetypal nature of the characters mean that it offers little in the way of surprises, the entertaining set pieces and decent acting (especially given the young age of most of the cast) combine to maintain the tense atmosphere and watchability throughout, as it slowly edges towards its inevitable conclusion. The nostalgic indulgence of the depiction of the adolescent shenanigans, which range from money laundering to elaborate dating scams, belies the semi-autobiographical nature of the film (something that is confirmed in the end credits, and also by director Sandu himself, who claims it to be 80% experience based). Indeed, at times the “boys will be boys” aspect goes too far in over-romanticizing behavior that is essentially quite puerile, while the intriguing episodes that could lead to broader themes are left largely unresolved. A prime example is the disappearance of Aid (Ali Amir) to Germany on a mysterious mission that is never fully explained. That said, the film is nevertheless very evocative in its recreation of the school atmosphere, and especially in its construction of the social sphere of the place, with all its hierarchies and assignation of interdependent functions.

One of the most interesting subthemes running throughout the film is that of the privileged position of priests in Romanian society. Each expulsion from the seminary is seen as a tragedy for the boy in question, the majority of them having gained their place in the seminary on the basis of familial wealth or connections, Gabi included. Again, the character of half-Arabic, half-Romanian Aid is revealing, as everyone, teachers included, assume him to be Muslim despite the fact that his grandfather is also a priest. The character of Father Ivan himself reflects the allure of the priesthood for the power hungry, and in one of the most shocking scenes a priest flat out instructs his pupils in how to scam their future parishioners and embezzle money in various ways. Indeed, the implication is that those students with genuine religious intention are being re-educated, preparing them to replicate the problematic dynamics in place within the school throughout the wider world.

This aspect could also account for the decision to set the story in the 1990s, which must necessarily have marked a period of transition for the church, as it did for all major institutions. Alternatively, the choice of this time period could also just refer back to the autobiographical aspect and/or indulgence in a nostalgic whim to set montages of bad behavior to music in the vein of Montell Jordan. Whatever the case, it should be noted that the film is very restrained in its depiction of the time setting, which would not be particularly obvious if not for the soundtrack and the use of payphones, with no exposition clumsily shoehorned into dialogue or costumes, as is often the case.

Overall, One Step Behind the Seraphim is well made, well-acted and beautifully shot, and although somewhat lacking in originality, it remains an impressive first feature for a young director with promise for future works. Likewise, it’s easy to imagine some of the now-teenagers featured becoming familiar faces in Romanian cinema over the next few years.