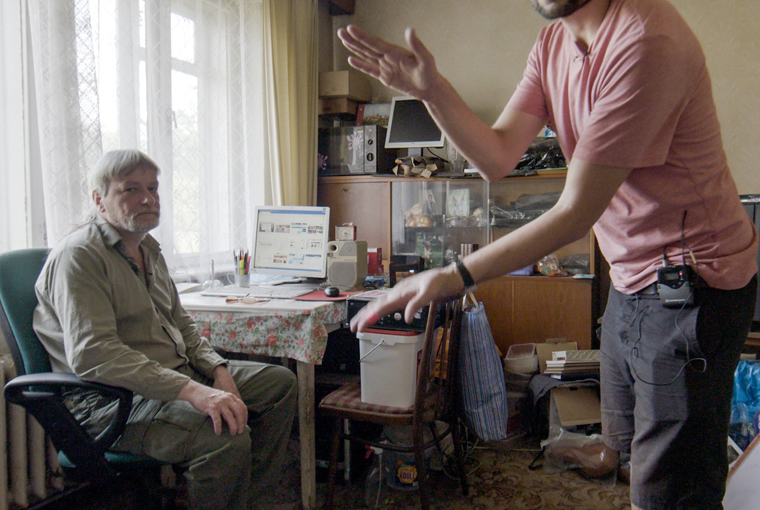 The poster of this year’s One World film festival in Prague (March 6-17) showed patches of exclamation marks and question marks in rainbow colors form into the event’s logo, a dot in soft-edged square brackets. For a showcase of human rights documentaries from around the globe, the implicit metaphor of big pictures resulting from a careful survey of select events and problems seems fitting. In our age of information democracy, the major problems of misinformation do not stem from an unavailability of facts so much as they result from a misarrangement and misinterpretation of claims that are often mostly true when taken in complete isolation. Thus, a big part of the work of academics, journalists, artists or curators in countering misinformation is not the unveiling of the missing pieces (although that is certainly an important part of it). Their equally important job is to provide explanations that help decipher complex and often conflicting realities, and thus help make sense of that which seems to fall wayside when we only consider the grand narratives lent to us by media corporations and politicians. The irony of this task, however, is that it is itself subject to many of the pressures that guide disinformation: to be recognized, we feel that facts must be exciting. And once we accept such a premise, it becomes difficult to lend equal emphasis to those facts that are startling, and those that are not. Suddenly, the big picture that was supposed to bring light to how things actually stand, itself begins to be painted with unequal colors.

This is a trap several of the films selected for this year’s One World festival fell into. Invoking the pretense of looking “beyond the surface” where mass media are afraid to go, they jump on the bandwagon of obsessing with rightwing populism and conspiracy theorists, thus lending additional exposure to those scenes’ already bloated media presence. Yet more worryingly, the aim to look at the human side of rightwing extremists diverts not only from the irrationality and utter inhumanity of their beliefs, but also from the fact that their unsurprising compassion for their loved ones is coupled with a converse hatred for everyone they consider to be different. Showing a Neonazi tend to his dog and child does not show the bigger picture of his aggressive potential and tribalism. The fact is that it does not show any big picture at all.

Anastasia Eleftheriou saw two films that struggle with the abovementioned dialectic of fighting against a narrative they are really feeding into. Ondřej Šálek’s 35-minute documentary follows Petr Černý, an old man with extreme rightwing views and a self-produced TV show built around various conspiracy theories. In our interview with Šálek, the young director shares his views about the filmmaking process and the potential of rational discourse. Filip Remunda’s Okamura Brothers, meanwhile, portrays three brothers, among them famous Czech rightwing populist Tomio Okamura, in a film advocating mutual compassion and understanding. We also spoke to Remunda and his long-time collaborator and script-editor Jan Gogola about the idea behind the film, and their hopes for social cohesion. Zoe Aiano saw Paweł Ziemilski’s largely harmless In Touch at One World, an experimental documentary that tries to visually translate the partial immigration of a Polish town to Iceland. Meanwhile, for our Ukrainian focus 2019, Daniel Fuller reviewed Gogol Doc, a somewhat disappointing view into the genesis of a 2016 avantgarde festival.